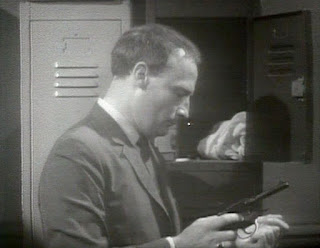 My Network DVD Callan: The Monochrome Years boxed set arrived yesterday, and tonight I watched the very first episode. The pilot episode in fact, made as a one-off TV play in the popular Armchair Theatre series in early 1967.

A Magnum for Schneider was later remade (not entirely successfully) in colour as the Callan movie, but I’d never seen the original.

There are some interesting differences between this pilot and the series proper. The relationship between Callan and his disreputable and evil-smelling burglar pal Lonely hasn’t yet been fleshed out. The strange affection that Callan has for Lonely is not yet in evidence, and we have no hints of the backstory that explains the unlikely friendship between a government assassin and a burglar.

The other big difference is that Toby Meres is played by Peter Bowles, of all people! Now I’m a big fan of Peter Bowles, but this is unexpected casting indeed. And it doesn’t really work. Partly this is because you can’t help comparing this to Anthony Valentine’s superb and chilling performance in the series proper. The Bowles version of Meres is neither sinister nor frightening, nor does he have the surface charm that hides the viper underneath.

Edward Woodward though has already nailed the character of Callan pretty effectively. And the cynicism and pessimism, and the total lack of glamour, the seediness, all these ingredients are present. The story itself works quite well. The later movie version takes advantage of the opportunity to flesh out the story a little and is more polished. 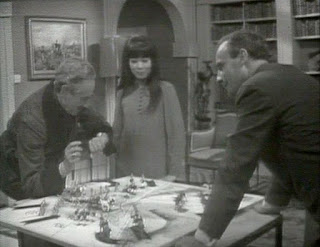 Callan of course is an agent for the Section, a shadowy department of one of the security services. If someone is considered to be posing a risk to national security the Section’s job is to neutralise that risk. The preferred methods are persuasion, intimidation and blackmail but if they don’t work then more drastic methods are used. The one sure way to remove a security risk is to kill the person involved.

This is a part of the job that Callan doesn’t like but he accepts that sometimes it’s necessary. He does however have a real problem in those cases where he has to get to know the person first. In this case he gets to know the target pretty well, and worse still he grows to like him.

This neatly sets up a theme that will recur repeatedly in this series. Callan is a very efficient assassin, in fact he’s the best in the business, but he has a conscience and he has emotions. Those are luxuries that an assassin cannot afford.

The picture and sound quality are pretty dodgy, but it’s a miracle this very first appearance of Callan has survived at all.

If you’re a fan of the series then A Magnum for Schneider is obviously a must-watch even if it’s not quite up to the standard of the series proper.
Posted by dfordoom at 22:58