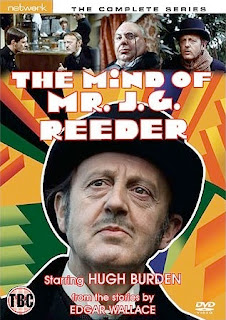 The Mind of Mr J. G. Reeder was a delightfully quirky British murder mystery series set in the 1920s and based on Edgar Wallace’s J. G. Reeder short stories. Wallace was known more as a thriller writer than a mystery writer but his J. G. Reeder stories are genuine, albeit slightly unconventional, detective stories. The first season went to air in 1969. A second season followed in 1971, this time with original stories.

This series has many things going for it, not the least of them being Hugh Burden’s marvelous performance as Mr Reeder. Mr Reeder is not a policeman as such. He works for the Office of the Public Prosecutor as a special investigator, concentrating on crimes that require his special talents - crimes that need to be handled with discretion, or with particular urgency, or that are for some reason too awkward for conventional police methods to be successful. Mr Reeder is a shy, awkward, self-effacing physically negligible  little man in late middle age. Not the sort of man, you might think, to strike fear into the heart of the average criminal. appearances can be deceptive. In fact Mr Reeder is very much feared by the criminal underworld. Many criminals have made the mistake of underestimating him. Those miscreants are now either serving lengthy sentences in one of His Majesty’s prisons or they have ended their criminal careers on the scaffold.

The Mind of Mr J. G. Reeder combines a subtly tongue-in-cheek approach with ingenious and original plotting. The 1920s setting is evoked pretty successfully on the whole.

Willoughby Godard contributes an outrageously over-the-top performance as Reeder’s boss, Sir Jason Toovey. Sir Jason is the kind of civil servant who is very good at two things - taking credit for other people’s hard work and shifting the blame for his own failures onto someone else’s shoulders. He is a man of limited intelligence but possessed of a great deal of cunning. Despite his conning, his duplicity and his utter lack of scruples for some curious reason which he is never able to understand he never seems to be able to get the better of the apparently insignificant and harmless Mr Reeder. The exchanges between Reeder and Sir Jason provide a great deal of the considerable wit that characterises this series. 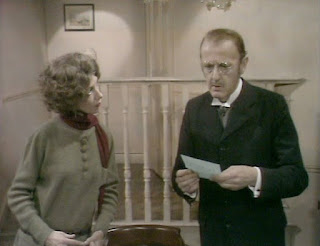 One interesting thing about the second season is that Sir Jason seems to have been made into a slightly more sympathetic, and slightly more intelligent, character. Fortunately he’s still just as amusing.

The dusty, timid and bookish Mr Reeder is not the sort of man one would normally associate with romance. Mr Reeder is however full of surprises and there is indeed romance, or at least potential romance, in his life. Even more surprisingly the object of his passions is a very beautiful young lady, the charming Miss Belman (Gillian Lewis). The only obstacle they face is their mutual shyness. It is clear that Miss Belman very strongly reciprocates Mr Reeder’s feelings.

Season two kicks off with The Duke. Mr Reeder has to deal with a Chicago mobster and a disputed succession to an English title and the estate that goes with it. There is murder afoot and with Chicago gangster planning to bring in a few of his boys from the States there’s the potential for a great deal of mayhem. And a great deal of fun - this is an excellent episode. 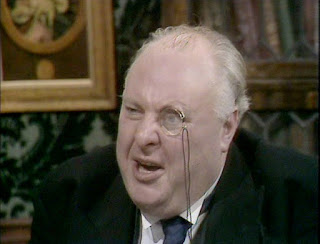 Death of an Angel takes Mr Reeder into the world of motion pictures, a world that proves to be every bit as immoral as he had feared. An actress has been murdered but there is an evil plot afoot that may claim several more victims if Mr Reeder does not act quickly. Blackmail is involved and there’s an attempt to blackmail Reeder, but it’s an unwise criminal who thinks he can outsmart J.G. Reeder. A very fine episode.

There are of course plenty of people who would like revenge on Mr Reeder and in The Willing Victim one of them is trying to make that wish into a reality. The plan is a particularly clever and twisted one.

In The Fatal Engagement some very important and very distinguished men are in danger of being implicated in the murder of a music hall star. Sir Jason of course is anxious for Reeder to prove that such men could not possibly have been involved in something as sordid as an affair with a music hall performer. This is one of the episodes that succumbs to the temptation to score cheap political points and as a result it’s not as much fun as it could have been.

Find the Lady involves the mysterious disappearances of a number of young ladies. That would be bad enough but these young ladies are the daughters of some of the most distinguished peers of the realm - they are the flower of the aristocracy. Could it be a Bolshevik plot? Or something much worse - perhaps they have been sold into white slavery! Both Mr Reeder and Miss Belman take active, and dangerous, roles in the subsequent investigation. This is another episode where the social satire is a little overdone but on the whole it’s a fun episode. And I love anything to do with stage magic and this story features a sinister Chinese illusionist. 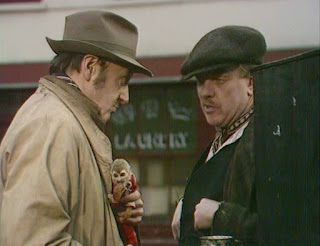 The Treasure House closes the second season on a high note. Larry O’Ryan is a likeable young man who happens to be a reformed safe-cracker. Now he’s in trouble and he’s come to Mr Reeder for help. He’s in love. He doesn’t even know the young lady’s name but he knows she is in danger. And indeed she is, but the question for Mr Reeder is to decide which of the various oddball types surrounding the lady presents the real danger. This episode has a slightly surreal feel and there’s an outrageousness to the plot that is very Edgar Wallace indeed.

In each episode of this season Mr Reeder finds himself with a new young lady as his secretary, each of whom proves to be wildly unsuitable or simply quite mad but they provide considerable amusement.

Although the second season was shot in colour only two episodes survive in colour. We should be grateful that all eight episodes do survive, even if mostly in black-and-white versions.

Network’s boxed set includes both seasons in their entirety.

The second season is perhaps not quite as good as the first but The Mind of Mr J. G. Reeder is still wonderfully offbeat  television with mostly fairly decent plots (some being very clever indeed) and it’s executed with a great deal of style and wit and charm. Highly recommended.
Posted by dfordoom at 18:21