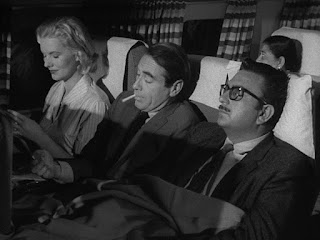 Three episodes of Alfred Hitchcock Presents, all from 1958 and from the third season.

In Flight to the East American foreign correspondent Ted Franklin (Gary Merrill) tells his story in a series of flashbacks while on a flight from Nairobi to Cairo. He tells the story to a woman, and she seems to be remarkably interested in it. It’s all about a news story he covered that attracted a lot of attention but also caused him a lot of trouble. Sasha Ismael, a French Arab, had been accused of gun-running during the Mau Mau Rebellion in Kenya. As his trial progressed Ted Franklin had become more and more convinced that Sasha was innocent and was the victim of a conspiracy.

Franklin gets permission to speak to Sasha alone and what he is told convinces him that an injustice is about to occur.

Initially it’s rather puzzling that the story is told in flashback but the reason will eventually become clear. The key to the puzzle is that interview with Sasha Ismael. What exactly did Sasha tell him?

I get the feeling that writers Joel Murcott and Bevil Charles don’t really understand the English legal system. They seem to assume that a prosecutor in an English court is a bit like a District Attorney in the United States, which of course is not the case at all. As a result they make the mistake of thinking that the prosecutor plays a part in the investigation before the case goes to trial. It’s an unfortunate weakness in the story. 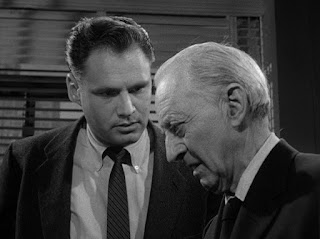 Apart from that it’s not a bad story. The necessary major plot twist is nicely complex and ambiguous.

Listen, Listen…..! is definitely one of the weaker episodes. Bernard C. Schoenfeld wrote the teleplay from a story by R.E. Kendall. An old man goes to the police. He has a theory about a murder case. The police are not interested. As far as they are concerned the Stocking Murder Case is all wrapped up and the man who killed three young women is safely behind bars awaiting trial. The old man tries to convince them that a mistake may have been made - the third murder may have been a copycat crime.

He tries more than one policeman. Then he tries to convince a hardbitten reporter. Finally in desperation he goes to a Catholic priest - he must find someone who will listen to him.

Post Mortem was written by Robert C. Dennis and based on a Cornell Woolrich short story.  Woolrich’s stories were the basis for countless movies including some of the finest examples of the film noir and psychological thriller genres so my expectations for this episode were very high indeed. 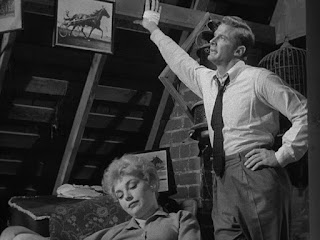 Except for one slight problem. The ticket was bought by her late husband, Harry. And the problem is, she has no idea where Harry put the ticket.

A frantic search ensues. The trouble with searching for something is that sometimes you find more than you bargained for.

This is a delicious story and it has all the ingredients of the best Alfred Hitchcock Presents episodes - it has the black comedy and the vicious little plot twists and most of all it has the seemingly innocuous situations that become unexpectedly nasty. It also has a delightful performance by Joanna Moore.

Dip in the Pool, based on a story by Roald Dahl, was directed by Hitchcock himself. Inveterate gambler William Botibol (Keenan Wynn) convinces himself that he has found a surefire way to win the ship’s pool (a kind of sweepstakes based on the number of miles the ship travels each day). If he doesn’t win he’s in very big trouble - he’s lost all the money that is to pay for his wife’s holiday in Europe. He may have to consider drastic measures to make sure he wins.
Posted by dfordoom at 03:31