Season two of The Sweeney first went to air in late 1975 and easily maintained the first season’s reputation as the most exciting police drama TV series of the decade.

There’s not much to be said about this series that hasn’t already been said so I’ll just touch on a few less obvious aspects. While John Thaw and Dennis Waterman get most of the attention (and they are superb) the contribution of the third regular cast member Garfield Morgan, who plays DCI Frank Haskins, should not be underestimated. It’s a good example of the way the series tries to avoid being too obvious. Haskins should be the type of copper that Regan despises. Haskins is clearly upper-class, he’s a stickler for the rules and he’s always got one eye on his pension. But even though Haskins is a policeman of a radically different type to the rules-bending working-class risk-taking Jack Regan, Haskins is still in his own way a good copper. And that’s what matters to Regan. On the other hand Regan does have his doubts as to whether Haskins has the mental toughness for the job. So while the obvious move would have been to set up an antagonistic relationship between these two men what we actually get is more complicated and more uneasy, with Regan regarding Haskins with an odd mixture of respect tinged with contempt.

At the same time the differences in approach are profound, and not just a matter of differing personalities. Regan believes in coming down hard on criminals and never giving them an inch because he understands that anything less will be seen by the criminals as weakness, with disastrous consequences. Haskins is by nature a conciliator, a compromiser. This tends to make for a successful career but whether it’s the right approach for a policeman is debatable. These differences in approach will come to a head in spectacular fashion late in season two.

The Regan-Carter relationship is also somewhat complex. There would have been two obvious ways to play this, either as a buddy movie-style equal partnership or as a junior officer learning the ropes from an old hand. But neither of those options really describes this particular relationship. George Carter is a sergeant in the Flying Squad which means he has at least a few years’ service behind him - he’s no wet-behind-the-ears youngster straight out of Police College. He doesn’t need Jack Regan to teach him his job. On the other hand it’s not quite an equal relationship - Regan is Carter’s senior officer and Carter has to go along with Regan’s methods even though in many cases he thinks they’re reckless and even potentially irresponsible. The two men are definitely close friends but it’s  a complex relationship. And that’s the kind of cop show The Sweeney is. The relationships between characters are complicated grown-up relationships, just as the situations they face on the job are complicated and messy. 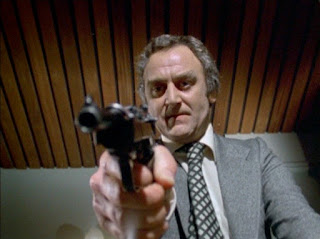 The secret to The Sweeney’s success is that it manages to be a grown-up cop series that is still enormous fun. The serious, gritty, brutally realistic and morally complex side is balanced by healthy doses of humour and even playfulness and it’s all done with breathtaking energy and style.

The Sweeney seems as fresh today as it seemed in 1975. In fact in some ways more fresh. It’s notorious lack of political correctness means that it has an honesty that you just don’t get in television today.

Chalk and Cheese is the story of a mismatched pair of young hoodlums, one lower-class and one decidedly upper-class. Both need money, although for very different reasons. Armed robbery seems to be an easy answer to their problem, but armed robbery that is a bit more imaginative than robbing banks. George Carter has a personal stake in this case which becomes a race against time since sooner or later one of these robberies will inevitably end with someone getting shot.

In Faces a gang of armed robbers have pulled three big jobs in two days, a rather surprising circumstance since villains generally lie low after a big job. In fact these are a bit more than just armed robbers and it appears that the Security Service (MI5) have some interest in this case. Which makes things nicely complicated for DI Regan.

Supersnout is one of those episodes that is played at least partly for comedy. Regan’s boss Chief Inspector Haskins is out of the country and DCI Quirk has taken over temporarily. Quirk is a bit of a Colonel Blimp type and his best years are behind him but he still dreams of breaking one big case that will gain him promotion, and a bigger pension. Quirk’s objective at the moment is to catch the infamous Post Office Gang. Quirk has an informant, and Jack Regan has an informant as well, and Jack starts to suspect that maybe the two informants are one and the same man. 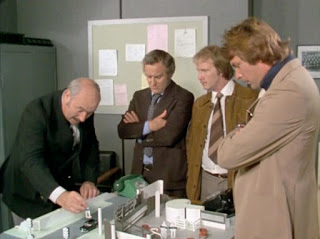 Meanwhile Quirk has devised a very elaborate plan to catch the Post Office Gang in the act. It all turns into a comedy of errors although there’s a serious and even slightly sad side to it as well.

In Big Brother a young suspect collapses while being questioned by Regan and is rushed to hospital. Given Regan’s reputation for being a bit free with his fists it’s not surprising that just about everyone suspects that he gave the lad a beating. The really bad news is that the young man is the kid brother of Phil Deacon, a very big time criminal with a reputation for being a very hard case indeed. Phil Deacon is the sort of guy who’s quite capable of having someone murdered, especially if he thinks that someone has beaten up his kid brother.

Hit and Run involves a woman who has been conned by her boyfriend into a diamond smuggling racket. She wants out but she knows too much. A case of mistaken identity has consequences for George Carter.

In Trap two very nasty hoodlums just out of prison have concocted an elaborate plan to frame Regan for corruption. Regan should immediately report the matter to his superior but of course he doesn’t - he has to do it his way. This episode certainly shows journalists in a very bad light, not that that’s hard to do. A good tough two-fisted episode.

The Golden Fleece is another partly tongue-in-cheek episode with two flash Australians carrying out a series of remarkably successful armed robberies, while DCI Haskins has major problems after a phony corruption allegation. The corruption sub-plot is played straight while the sub-plot with the two Aussie wild colonial boys is played mostly for humour. Oddly enough it all works and it’s a fine episode although it has to be said the Australian accents of Patrick Mower are absolutely excruciating.

In Poppy an armed robber who’s been hiding out on the Continent returns to Britain to reclaim the loot from his last robbery. He has plans to do a deal with the bank from whom the money was stolen. Lots of double-crosses follow. An excellent episode. 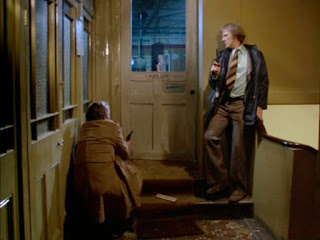 In Stay Lucky Eh? a couple of young tearaways pull off a safe-cracking job only to be relieved of the loot at gunpoint. They’re going to have some explaining to do to Mr Kirby, who financed their safe-cracking activities, and Mr Kirby is going to be very anxious to have a word with this gunman. Another excellent episode.

Trojan Bus is Jack Regan’s worst nightmare come to life - those Australian super-criminals Colin and Ray are back in town. This time they’ve taken an interest in the world of art. As usual they’re aiming high - nothing less than stealing a Goya. Their plan is typically outrageous - first they will steal a double-decker bus, then the Goya. Regan has become totally obsessed with these terrors from Down Under. This is a wildly exuberant and wonderfully entertaining episode, with some obvious nods to Butch Cassidy and the Sundance Kid.

In I Want the Man Regan knows there’s a big job, a very big job, about to be pulled. He doesn’t know who the main players are or what the job actually is, and his informant has disappeared. All he has is Frankie Little, and although Frankie is willing to co-operate he doesn’t know the details either. A fine gritty episode enlivened by strong performances by Roy Kinnear as Frankie and Russell Hunter as the hapless informant Popeye.

In Thou Shalt Not Kill a bank robbery becomes a hostage drama. This is an incredibly tense episode. A tough decision will have to be made - do the police negotiate with hostage-takers or not? Needless to say Regan believes the answer is no. A superb episode.

The Country Boy of the episode so titled is young Detective Sergeant David Keel from Bristol who is temporarily attached to the Flying Squad to help out with his specialised knowledge of alarm systems and telecommunications. Regan distrusts Keel immediately - Keel is too educated, too cultured, too arty, too upper middle class and most of all he is a technical specialist, something of which Jack strongly disapproves.

Cop shows really don’t get any better than The Sweeney and the second season is as good as the first season (which I reviewed here a couple of years ago). Very highly recommended.
Posted by dfordoom at 23:32