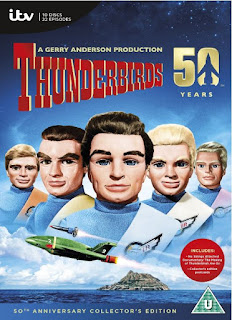 It’s a bit of a challenge trying to find anything new to say about Thunderbirds. It’s one of the truly iconic 60s TV shows, has maintained a loyal cult following for half a century and has been endlessly written about. All I can do is offer a few personal impressions, plus I’m going to talk about a few episodes that I’ve watched recently that have some interesting aspects to them.

One of the secrets to the success of the Gerry Anderson series of the 60s was that both Gerry and Sylvia Anderson had major input into the formats. Gerry knew all the stuff that boys were going to like (gadgets and action) and Sylvia knew what girls would like (a beautiful glamorous female secret agent). They had all bases covered.

And with Thunderbirds they really went all out to make sure they had all those bases thoroughly covered. It truly was a remarkably clever idea. The exploits of a rescue organisation had obvious potential for proving action and suspense. But this was to be an ultra-secret rescue organisation, so immediately you have the potential for some spy series-type intrigue. Add the aforementioned lady secret agent and you have even more excitement plus some glamour. To make this ingenious formula work they needed scripts that would provide the right mix of science fiction, spy thriller and crime thriller elements (with occasional dashes of humour and romance) and that’s what the writers came up with.

There was also Gerry Anderson’s determination to make each new series look more impressive than the preceding one. Thunderbirds is definitely a major step forward from Stingray. It’s visually more ambitious and it has a much more lavish and at the same time more realistic look. The action sequences are bigger and better. The miniatures are better. The puppets have been improved.

Compared to Stingray Thunderbirds definitely has more of an epic big-budget feel, it’s more cinematic. The hour-long format also of course lends itself to a more expansive and complex approach to plotting. 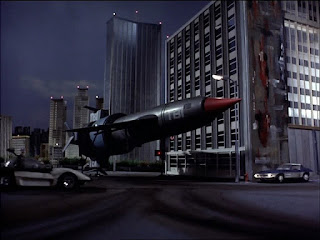 Stingray could be very exciting but there were many episodes that had a very whimsical feel. Which is fine, since it was essentially a kids’ show. Thunderbirds still has moments of whimsicality but overall it has a more sophisticated more grown-up tone. The whimsicality is kept strictly within limits.

While it was the spectacular rescues that were the series’ main selling point the spy/crime/ international intrigue angles actually dominate quite a few of the stories. In Brink of Disaster Lady Penelope, while out driving in her Rolls-Royce (unusually she is driving herself and is alone) is menaced by a couple of hoods. They take a few shots at her car with a submachine gun. At this point she decides the two men are a problem that needs to be disposed. So she kills them, ruthlessly and efficiently and without fuss. There’s no moral problem here. She is clearly acting in self-defence. It is however quite clear that Lady Penelope accepts that her job as a secret agent will sometimes require her to kill people, and it is clear that she has absolutely no problem with this. It’s a slightly surprising attitude to find in a kids’ show. What’s even more noteworthy is that in this case the violence is fairly realistic and not cartoonish.

There’s a definite attempt to avoid giving Jeff Tracy and his sons too much of a bleeding heart vibe. Obviously they are dedicated to saving lives and to doing good but they’re hard-headed and realistic about it. It’s also interesting that a rescue organisation employs a secret agent (Lady Penelope) and that it’s taken for granted that her duties will from time to time involve killing people. Jeff Tracy clearly understands how the real world works and that an overly sentimental or naïve approach won’t get you very far. It’s a remarkably clear-sighted and realistic view to come across in a children’s television program.

Brink of Disaster is an interesting episode not just for its insights into Lady Penelope’s ruthlessness. A major challenge for the writers was that Thunderbirds has a large cast of regular characters. There are ten major characters and a couple of other recurring characters. They all need to be given something useful to do. So in this episode there are two interconnected plot strands, one of which gives Jeff Tracy, Brains and Tin-Tin the rare opportunity to be personally involved in a rescue while the other puts Lady Penelope and Parker at centre stage. 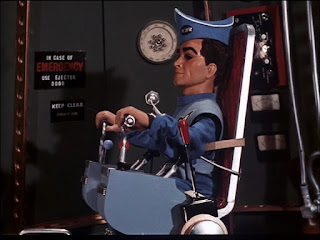 Attack of the Alligators! is another interesting one. While Thunderbirds is science fiction the science fictional elements are generally quite restrained. Most of the technology consists of what would have seemed like fairly conservative extrapolations on the technology of the mid-60s. Space stations, hypersonic aircraft like Thunderbird 1, high-speed monorails, supersonic airliners, advanced cargo ships requiring only a skeleton crew, all these things would have seemed very plausible indeed. Attack of the Alligators! is a rare example of a Thunderbirds episode that involves rather fanciful science fiction elements (alligators grown to several times their normal size by a new miracle drug). In fact this story has the feel of a 1950s monster movie.

We also make a surprising discovery in this episode. International Rescue’s hoverbikes are missile-armed! And Thunderbird 4 carries missiles as well.

Martian Invasion involves not an alien invasion but a movie about an alien invasion. An accident on the set leaves two actors trapped in a cave that is rapidly filling with water. But that’s only part of the story, the real story being that it is all part of a plan by the nefarious super-spy The Hood to steal International Rescue’s secrets. And International Rescue does not take kindly to any threats to its security. It turns out that Thunderbird 1 and Thunderbird 2 are also very well-armed and Scott and Virgil are quite willing to resort to extreme measures to keep the organisation’s secrets. The combination of a race against time to rescue the trapped actors with some remarkably well-filmed action scenes (the chase scene involving Thunderbird 1 is particularly impressive) makes this a very entertaining episode.

The Duchess Assignment is a crime thriller episode with a rescue thrown in at the end. This one could easily have been an episode of The Saint, with Lady Penelope trying to extricate an old friend from the clutches of crooked gamblers and trying to foil art thieves. 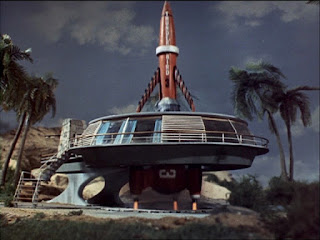 The Cham-Cham is a spy thriller, with Lady Penelope and Tin-Tin going undercover to investigate a possible link between a pop group and the mysterious loss of several military transport aircraft. This episode demonstrates the growing confidence of Anderson’s team of puppeteers - we see puppets playing musical instruments, skiing and dancing and doing so fairly convincingly. They even do stunts! So far as puppeteering is concerned this may be the most ambitious episode yet. And with a bit of a Bond movie feel to it (not surprising in 1966) it’s also great fun.

Operation Crash-Dive is a more conventional rescue-oriented episode. The loss of one of the highly advanced Fireflash supersonic jetliners was bad enough but now a second Fireflash has crashed, in almost the same location. International Rescue are on the scene but there seems that there is little they can do until Brains comes to a startling conclusion. The Fireflash may have crashed into the sea and it’s possible that the flight crew could be still alive, trapped deep beneath the sea.

International Rescue do a bit more than just carry out a rescue though. For the next Fireflash test flight they take over the whole process of investigating the cause of the air disasters. There's plenty of excitement to come in this story.

In Edge of Impact that villainous super-spy The Hood is sabotaging the test flights of the advanced new fighter the Red Arrow. There’s also the matter of two men trapped atop a television transmitting tower, and that’s due to The Hood as well. The rescue method is certainly different and it involves a bizarre gadget, so all in all a good episode.

Cry Wolf is an episode that threatens to get a bit too warm-hearted. A couple of boys in the Australian Outback are playing at being International Rescue but their radio message is treated as genuine by the real International Rescue and Scott sets off in Thunderbird 1 to rescue them. When he discovers it was all a game Scott decides to take them back to the secret base on Tracy Island, hoping that this will persuade them not to send out any more fake distress calls. But what happens when soon afterwards the boys really need rescuing?

Dennis Spooner throws in some spy thriller elements, with the boys’ father being involved in an ultra-secret government satellite tracking project and masterspy The Hood determined to steal the project’s secrets. After a slow start things pick up and there’s a double race against time as the climax. It gets a bit whimsical at times and it’s not a classic but it’s an OK episode.

Thunderbirds really is great entertainment. There’s the occasional dud episode but the good episodes (and there are plenty of good ones) are significantly better than anything Anderson had done before. Highly recommended.
Posted by dfordoom at 21:55