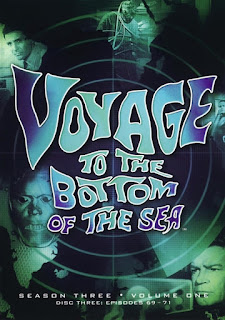 I posted on the subject of the first half of season three of Voyage to the Bottom of the Sea in January. This current post is basically just an episode guide for the second half of the season.

The Brand of the Beast is the kind of episode that, for better or worse, gained season three its reputation for fairly silly monster stories. The Seaview is racing to save a group of scientists on a sinking ship. The reactor overheats and Admiral Nelson has to risk radiation poisoning to fix it. Now of course the great fear that haunts everyone who works with nuclear energy is that if they get a heavy dose of radiation they’ll turn into a werewolf. In fact of course this can only happen if you’ve already been exposed to the werewolf virus. On the other hand on a vessel the size of Seaview it’s pretty much a certainty that there will be at least one crew member who carries the werewolf virus, and of course in this case that person is Admiral Nelson.

So we get the admiral running amok and smashing all kinds of vital equipment and almost sinking the Seaview. Which is fun even if it’s kind of silly. What makes this episode more interesting than you might think is that both Captain Crane and Chief Sharkey are put in positions where their loyalties conflict with their duties and they have to make agonising decisions. And the actors really do try their best to carry it off. The ending is ludicrous but it’s ludicrous in a fun way.

The Creature is typical season three stuff. A somewhat unhinged scientist has created an artificial life form and (perhaps unwisely) released it into the sea. Now this seaweed monster has grown huge and it’s decidedly unfriendly. Admiral Nelson wants to destroy it but that’s not easy as the monster starts taking over the minds of the Seaview’s crew. This is all pretty much stuff that has been done before. A very weak episode.

In Death from the Past the Seaview finds a strange structure on the sea floor. Inside this structure Captain Crane and his men find - Nazis! Live Nazis, who think World War 2 is still raging. The structure is a weapons lab, full of secret weapons. The Nazis, who don’t seem to be aware that 35 years have passed (and who haven’t aged since 1944), want to take over the Seaview for the Führer. Not a very impressive episode. 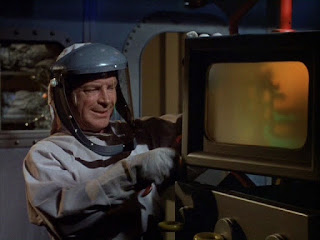 The Heat Monster is not entirely a bad idea. A foolish Norwegian scientist guides an alien entity to Earth. The alien is a heat creature and it’s obviously not friendly. The script is fairly pedestrian which is a pity since the special effects are reasonably good and the Arctic setting is terrific (and is used to good effect).

The Fossil Men is another monster story. The monsters are rock men, as in men made of rocks. Naturally they have evil designs on the Seaview and its crew. This is one of a number of season three episodes in which Richard Basehart and David Hedison give the impression of playing things, part of the time at least, with tongue planted firmly in cheek. Amusingly the episode starts with Nelson reading sailors’ tales from the 17th century about  horrific events after ships are destroyed in a maelstrom. The Seaview is about to encounter exactly the same fate. The rock men look pretty good, even if they are guys in rubber suits. This is a thoroughly enjoyable episode and even its weaknesses have the effect of adding to the fun.

In The Mermaid a secret mission has to be delayed because Captain Crane is off chasing a mermaid. This is the kind of story that all too often brings a science fiction series to shipwreck. It’s extremely difficult to get the tone just right. It has to be a bit whimsical but kept within limits, there has to be a touch of humour but it can’t be played for broad comedy and it has to have a slight suggestion of a dream-like atmosphere but without going too far. They almost pull it off. The first half of the episode works perfectly. Then it disappointingly turns into another guy-in-a-rubber-suit monster episode. On the plus side Diane Webber makes an adorable mermaid, John Lamb’s underwater photography (including footage from his odd but interesting feature film The Mermaids of Tiburon) is gorgeous and David Hedison’s performance is excellent. This should have been a terrific if  offbeat episode. Despite its flaws there’s still a lot to like about it. I don’t think writer William Welch can be blamed for the way the episode loses its way - by this time the network had made it pretty clear that they wanted monsters and that’s all they wanted so he probably didn’t have much choice about throwing in the monster stuff.

The Mummy starts intriguingly enough. The Seaview sneaks into the port of New York, Nelson and Crane use the Flying Sub to steal ashore incognito and they return with a 3,000-year-old mummy in a case. Even before the opening credits we have reason to believe that the mummy may not be quite dead, and something odd is happening to Captain Crane. 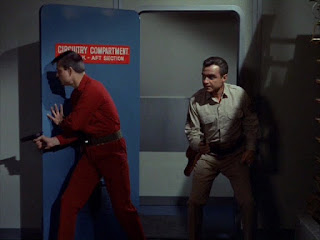 Strange things start to happen. Things like sabotage, and crewmen getting attacked. It’s as if someone or something is determined to prevent the mission from being accomplished. Mind you, the mission itself sounds rather unlikely anyway.

The mummy itself is pretty dismal but the story is fun if you don’t try to make sense of it. In fact you can’t make sense of it - most of the questions you want answered don’t get answered. And at the end Admiral Nelson tells Crane that some things are best left unexplained, which pretty much sums up this episode. For all its faults I enjoyed this one.

Seaview is on a mission to exercise control over the launch of an interstellar space probe when the submarine is engulfed by what appears to be a black void and one by one the crew gets taken over by an alien entity in Shadowman. It’s an idea that had already been used once too often. This episode is drearily unimaginative and is made worse by its all-too-evident cheapness. It’s not that the special effects are poor. They’re non-existent and it’s an episode that desperately needed special effects.

Is No Escape from Death the worst-ever episode of Voyage to the Bottom of the Sea? It certainly has to be a contender for that title. The Seaview sinks (which is no big deal since it sinks in nearly every episode of the third season) but this time it sinks really badly. This episode is mostly a succession of clips from earlier episodes, many of them in black-and-white just to make it more insultingly obvious what has been done. It was a way to keep the budget at absolute rock bottom, and by this stage that was obviously all that mattered.

The best thing that can be said about Doomsday Island is that it doesn’t look as cheap as the episodes that preceded it. In fact there are things about it that look quite impressive. Unfortunately the aliens themselves are very poor guys-in-rubber-suits monsters. This is your standard space aliens taking over the world story, with the first step naturally being to take over Seaview. One or two good ideas in this story, and an enormous amount of silliness. 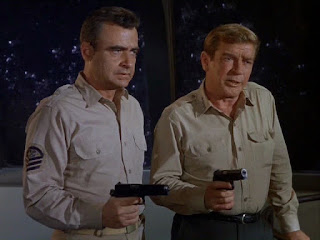 After a succession of disappointing episodes things get back on track with The Wax Men. The Seaview takes on a strange cargo - crates filled with wax statues reputedly from the Lost Continent of Atlantis. Only that’s not what’s in the crates. They actually contain robotic wax dummies of every member of the Seaview’s crew, plus one small but very malevolent clown. The clown is actually a diabolical criminal mastermind and the robotic wax dummies take over from the crew and allow him to gain control of the submarine. The clown has made one miscalculation - the real Captain Crane is still at large and he wants his submarine back.

This one has a genuinely creepy atmosphere. The wax robot crew members are wonderfully but subtly sinister. There’s also terrific paranoia - Crane is entirely alone and has no way to fight back. He’s just waiting until he gets hunted down. The effects are very good. David Hedison does well as Crane starts to crack under the pressure. Michael Dunn (best remembered perhaps as the evil megalomaniac Dr Loveless in The Wild Wild West) makes the clown convincingly deranged and menacing. And there’s a nicely surreal feel to proceedings. This is enhanced by the wise decision not to over-explain things (and not offering an explanation adds to the terror and mystery). One of the best episodes of the season.

Deadly Cloud is another alien invasion story that utilises too many tired ideas that the series had used too many times before. The aliens have the ability to take control of members of the crew and turn them into obedient robotic zombies. Even with the threat of the world ending in 20 minutes’ time this story can’t work up any real suspense or excitement. 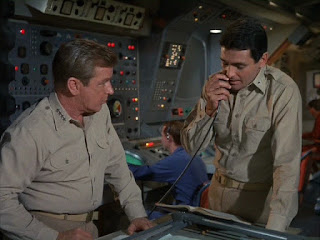 Destroy Seaview! again relies on plot devices that were becoming all too familiar but at least there are no monsters. We also find out how to deal with a nuclear reactor that is about to go critical - you just shoot it, with lasers. An OK episode.

Perhaps the most surprising thing about season three is that Richard Basehart and David Hedison continue to put real effort into their performances. With the increasing silliness of the stories there must have been a temptation either to lose interest or start hamming things up but by and large they resist those temptations, although Basehart does occasionally succumb. Basehart took himself quite seriously as an actor and wasn’t especially happy making the series, and was also drinking rather heavily. David Hedison seems to have taken a more realistic and more philosophical view - the series was fun to do and it paid well.

The real problem with season three is not that it had become locked into a Monster of the Week formula, but the fact that the budget was woefully inadequate for following such a formula successfully. Some of the monster stories (such as The Mummy) might have worked quite well with a bit more money spent on them. I also get the impression that the writers were starting to accept that no-one really cared about the series any more and as a result they were not exactly motivated to produce dazzling scripts.

Season three does have its moments but it’s heartbreaking to see the sad decline of what had been the best American sci-fi series of the 60s.
Posted by dfordoom at 06:02