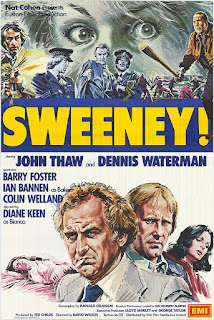 It was a fairly common practice in the 70s for successful British TV series to spawn a feature film spin-off. In the case of The Sweeney there were two spin-off movies. Sweeney! was the first and was released in 1977.

Detective Inspector Jack Regan (John Thaw) and Detective Sergeant George Carter (Dennis Waterman) are hardcase coppers with Scotland Yard’s elite Flying Squad. This time they’re involved in an unusual case involving the potential for international intrigue. This is the sort of thing that would normally be dealt with by Special Branch but the script gets around this difficulty by having Regan get involved in an indirect way, doing a favour for a particularly useful informant named Ronnie Brent.

Ronnie’s girlfriend has just died. A verdict of suicide was brought in at the inquest but Ronnie is adamant that Janice would never have killed herself. He asks Regan to look into the case in an informal sort of way.

The case proves to involve corruption at the highest levels, with high-class call girls used as bait, and organised by people to whom mass murder is just routine stuff, just another day at the office.

Ranald Graham’s screenplay is in fact a little overblown. One gets the impression that this movie is trying to be a conspiracy theory political thriller of the sort that enjoyed some popularity in the 70s. It’s not the kind of story one associates with The Sweeney and Im not sure it was a terribly good idea. It’s the kind of story that needs a very big-budget approach. It also has a slightly transatlantic flavour to it which is odd since one of the reasons for The Sweeney’s success was its thoroughly British feel. 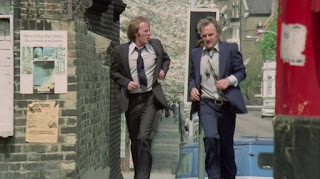 The advantage of the feature film format over television is usually obvious - bigger budgets, the opportunity to do more ambitious action scenes, better image quality. In other words a cinematic look. This doesn’t really apply to The Sweeney though. The series was shot on a fairly generous budget, on 35mm film and entirely on location, and with fairly ambitious action scenes, so it already looked cinematic. The movie looks pretty much like the TV series.

This may be the reason for the political thriller plot - if the film was going to end up looking like an extended episode of the TV series then the grandiose plot would provide the necessary cinematic feel. 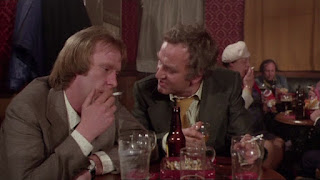 It might be unfair to say that The Sweeney TV series was an exercise in style over substance. It was a very well-written series. At the same time it has to be said that style was a very important ingredient. That style sharply distinguished it from previous British TV cop shows. It was not just a matter of visual style. It was the whole atmosphere, the mix of seediness, mild sleaze and violence, the approach taken by the two lead actors. Unfortunately a lot of that is lost in the movie. That’s partly due to the plot which casts Jack Regan as the maverick cop who gets suspended and then has to operate as a lone wolf, which means we miss out on a lot of the everyday interaction between Regan and other officers which was such an essential part of the series.

Sweeney! also takes advantage of the opportunity offered in a movie to increase the level of violence and the level of bad language and to add some entirely gratuitous nudity. This actually turns out not to be an advantage after all - it makes the movie seem a bit too much like just another generic action thriller. 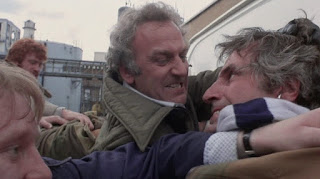 The Region 4 DVD release offers both spin-off movies on two discs. The anamorphic transfer for Sweeney! is pretty good. The lack of extras is a problem - viewers unfamiliar with the TV series would doubtless have appreciated a bit of background on the characters and on what was one of the most iconic TV series of all time.

It’s not that this is a bad movie. It’s just that fans of the television series are likely to be disappointed that it bears very little resemblance thematically or stylistically to the series, which is a problem since one assumes that the target audience for the movie would have been, primarily, fans of the TV series. Sweeney! is a 70s paranoia thriller. If you like that sort of thing it’s OK but pretty routine and the plot is rather silly at times.

Sweeney! is definitely a bit of a misfire.
Posted by dfordoom at 18:12