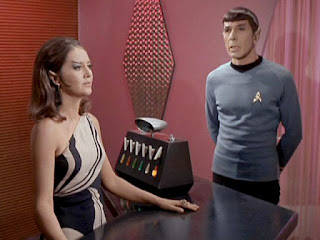 I have to be a bit careful in talking about The Enterprise Incident. Giving any plot details could give away spoilers so I’m going to be incredibly vague about the actual story.

We get first Kirk and then Spock behaving very uncharacteristically, and then we get an explanation of their behaviour that makes sense and is more than just a convenient plot device. It’s the heart of the episode, which is all about deception. It also offers some insight into their actual characters. They behave very dishonourably but they believe (rightly or wrongly) that they are justified in doing so. It does however tend to make nonsense of the whole idea of the Vulcans as a remarkably honest and honourable race. It is a little worrying that they seem quite unconcerned about their conduct. I’d have thought that these were both men who would dislike having to behave dishonourably, even if they felt that duty compelled them to do so.

In fact the episode makes nonsense of the whole idea of the Federation as the peace-loving virtuous high-minded entity that we’ve been sold on throughout the series. In this story the Federation is clearly in the wrong. Unfortunately D.C. Fontana’s script makes no attempt to explore any of these potentially fascinating aspects in any depth. The assumption seems to be that the Federation are the good guys so therefore whatever they do must be right. This is a missed opportunity but in 1968 the network was probably not going to allow the show to explore those aspects even had the writer wished to do so. And I suspect that Gene Roddenberry would not have been pleased at the idea of the Federation being exposed as hypocrites.

We also get an intriguing view of the Romulans. The Romulan commander (played by Joanne Linville) is also prepared to practise a certain amount of deception although she still comes across as being less immoral than the Federation. 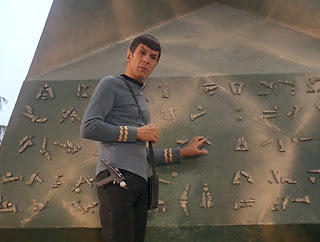 There’s also an angle to this story that you could never get away with today - the Romulan commander is undone by her own female vanity. In fact we see a female commander who, unlike most such characters in later science fiction movies and TV, does not behave at all like a man. It would be enough to get a writer burned at the stake today.

All in all it’s quite an interesting episode even if it pulls its punches a bit.

There’s also a reasonable amount of action and excitement.

Had this story been done in one of the later Star Trek series I suspect it would have been handled much less successfully.

The Paradise Syndrome by contrast is a bit of a disaster even though there are a couple of good ideas. The Enterprise has to deflect an asteroid that is about to destroy an Earth-like planet. Before that can happen Captain Kirk manages to get himself lost on the planet surface and in the process he loses his memory.

It is a very Earth-like planet indeed. Inhabited by people who are not just humanoid but very obviously human. In fact they’re American Indians. They’re not just similar to American Indians, they’re identical to American Indians. Of course in Star Trek we get lots of Earth-like planets populated  by humanoids who really seem pretty human. What’s interesting here is that The Paradise Syndrome tries to explain that curious fact and does so in a reasonably convincing manner, and a manner that offers potential for future story ideas. That’s the most satisfactory thing about this episode.

We also get Captain Kirk falling in love. OK, it’s not the first time that has happened, but this time things go much much further than in any previous episodes. Unfortunately the love story plays out rather predictably.

The supporting characters are totally two-dimensional and behave in utterly predictable ways.

The pacing is leaden and although the story should have plenty of suspense and excitement with its race-against-time element if all falls a bit flat. 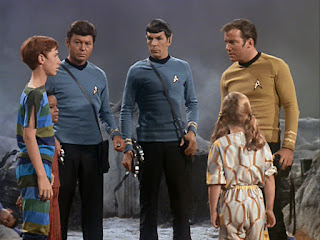 The episode’s best assets are the performances of Leonard Nimoy and DeForest Kelley. Spock and McCoy spar, as usual, but the sparring has some emotional depth to it. Spock has to make some very tough decisions, he’s under real pressure and feeling the pressure, and McCoy is making a real effort to see Spock’s point of view and understand the reasons for those decisions.

The Paradise Syndrome is an exasperating and not very well-executed mixture of good and bad.

And the Children Shall Lead has the reputation of being one of the worst, if not the worst, Star Trek episodes ever. And how well it deserves its reputation.

The Enterprise arrives at the planet Triacus to find that all the members of the scientific team there have killed themselves. I have to say that after watching this episode you’ll probably want to kill yourself as well. Actually it’s only the adults who committed suicide. Their children are still alive and seem extremely happy. In fact they seem pretty pleased that their parents are dead.

Dr McCoy thinks the children are suffering from traumatic shock but it soon becomes evident that they’re possessed by some kind of evil. They try to take over the Enterprise. They do this by paralysing the crew members with their worst secret fears. OK, that’s a reasonably OK idea but it’s very clumsily executed. The fears conjured up are just silly and totally unconvincing. Kirk and Spock have the strength of character to resist and they realise that if they can’t free the children of the evil they’ll have to kill them.

The children are being controlled by an evil alien named Gorgan. He’s perhaps the least scary villain in television history.

The acting is dismal. The children, except for the blonde girl, aren’t convincingly evil. The regular cast members don’t distinguish themselves. That is perhaps more the fault of Edward J. Lakso's script than of the actors. Kirk, Spock and Dr McCoy are all put in situations with the potential for interesting explorations of their characters but the script fails to exploit the opportunities and the actors are left floundering.

The script has a couple of almost interesting ideas that aren’t developed. The pacing is leaden and the ending is feeble.

This is about as bad as television science fiction could ever get.

So three episodes, one very good and extremely interesting, one not so good and one terrible. Which sadly tells the story of the third season of Star Trek.
Posted by dfordoom at 05:31