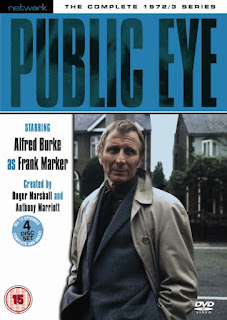 The sixth season of Public Eye was broadcast in Britain in 1972 and 1973. Down-at-heel private enquiry agent Frank Marker (Alfred Burke) is still based in Windsor. Business is not exactly booming but he is keeping his head above water, although sometimes only just. He hasn’t established what you would call a wide circle of friends but Marker is a very self-contained sort of guy and that doesn’t bother him. He has at least established a fairly cordial relationship with the local police in the person of Detective Inspector Percy Firbank (Ray Smith) although a friendship between a private detective and a policeman is always a little tricky.

The basic formula of this series did not change very much during its ten-year run. This is a private eye series without any glamour at all. Frank’s cases are mostly pretty routine. He does not usually find himself mixed up in anything as spectacular as murder. He’s more likely to be doing divorce work or trying to find people who don’t want to be found. There are no car chases or shoot-outs. These are character-driven stories. It’s gritty, realistic and often very cynical but with a touch of humour that prevents it from being too bleak.

Frank Marker is a bit on the seedy side and he has long since lost his illusions. His job can be fascinating but it can also be tedious and frustrating and on occasions unpleasant. Sometimes a private enquiry agent has to do things that he isn’t terribly proud of. There are moral dilemmas to be faced but Frank approaches his job philosophically. If people employ a private detective that’s their choice and if his investigation uncovers something that the client would have preferred to have kept dark that’s the risk the client takes. Frank is not a social worker.

It’s the kind of series that could have been terribly dull and earnest but it never is. Consistently strong writing and Alfred Burke’s wonderful performance as Marker makes this one of the most engrossing private eye series ever made.

The season opener is The Bankrupt. Marker’s friend Tom Lewis (Gareth Evans) wants him to get back a large sum of money he lent to Melville Hayden-Peters (Ray Barrett). Peters has declared himself bankrupt but he’s still driving around in a Rolls-Royce and living in the grand manner. Hayden-Peters has obviously been very clever, but has he been clever enough? And it seems that everyone in this story thinks of themselves as being very clever, but perhaps none of them is clever enough? 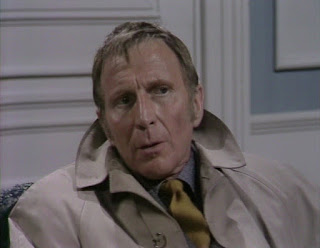 Frank Marker might not think of himself as a terribly clever man but he’s been around and he’s no fool and he’s gradually fitting all the pieces together. They don’t make a very pretty picture. This is classic Public Eye - cynical and downbeat but with plenty of irony and some nicely biting humour. A superb way to kick off the season.

Girl in Blue is a missing persons case. A successful businessman sees a girl he recognises in a blue movie. The girl is his daughter whom he hasn’t seen for five years. He hires Marker to find her. Marker does try to warn him that sometimes people just don’t want to be found and that the daughter might not be the least bit interested in a reconciliation.

This story is a kind of time capsule - a journey back to the days of incredibly tame “blue” movies viewed in smoky backrooms on 8mm film projectors.

The danger with a series that takes a cynical downbeat view of life (and television doesn’t get much more downbeat than Public Eye) is that it can be overdone, and wallowing in pessimism and cynicism isn’t always healthy and it isn’t always good entertainment. Girl in Blue is one of those Public Eye episodes that does come across as bleakness for the sake of bleakness.

Many a Slip demonstrates one of the disadvantages of being a private enquiry agent. You have to follow the evidence you find, even if you have a feeling you might not like where it leads to. And Marker’s friend Detective Inspector Firbank finds that being a policeman involves the same disadvantage. And it all started with a woman wanting to buy a deep freeze and needing a credit reference. A neat little episode.

Baby-sitting cats is hardly the sort of thing a private enquiry agent usually does but when you can’t pay your phone bill you have to take any job that’s going. In Mrs. Podmore's Cat the cat belongs to a wealthy widow with a notorious fondness for younger men. Looking after Bertie (the cat) is challenge enough but Marker has to deal with a puzzling robbery as well, and a very smooth con man. This is one of the very rare Public Eye episodes with a lighter mood. 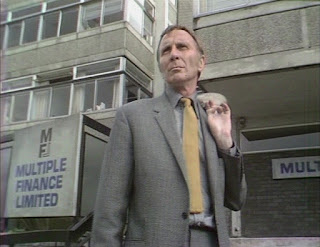 The Man Who Said Sorry is an interesting experiment. It’s all dialogue and it’s emotionally overwrought and very very stagey. A man who had employed Frank on a divorce case has decided he wants someone to blame for the mess that his life has become, and he decides that Frank is the man he’s going to blame. Frank however is not the kind of man with whom to play such psychological games. An interesting experiment as I said, but it’s heavy going and it gets a bit tedious.

Horse and Carriage is another oddity. This was a Christmas episode and it was obviously felt that a lighter mood was needed. Harry Longstaff hires Marker to check up on his wife who he suspects of having an affair. In fact Harry is always suspecting his wife of having an affair, and he’s always wring. He’s already hired Frank to check up on her on seven previous occasions. At the same time Longstaff’s wife has become suspicious of his frequent absences from home and she’s got a friend, a bumbling ex-cop, to check up on Harry.

Of course, despite appearances, both husband and wife are entirely innocent but somehow circumstances contrive to make them appear guilty. It’s a sort of bedroom farce but without any actual hanky-panky. Both Frank and the bumbling ex-cop become increasingly confused and exasperated, innocent bystanders get caught up in the craziness and it seems that it will all end in disaster. But it’s Christmas and somehow they all get through it without too much damage. Surprisingly enough it works quite well and it is genuinely amusing.

A Family Affair centres on a will. An elderly gentleman has left a third of his estate to his housekeeper and his two grasping middle-aged sons are outraged. They are determined to challenge the will and Marker is hired by their solicitor to dig up whatever information he can find on the housekeeper. He finds a lot of information and it’s not at all what his clients were hoping for. This episode is Public Eye at its best - not too bleak and cynical, taking a realistic but not entirely unsympathetic view of human foibles and having at least a dash of humour.

The Golden Boy draws Frank into an upper-class family drama. Young Vyvyan Reveldale, who is absolutely super at everything, has suddenly disappeared from Oxford. His ageing and flamboyant former tutor, whose interest in the lad may well extend beyond mere academic interests, wants Marker to find him. The Reveldale family seems curiously uninterested in Vyvyan’s whereabouts although Sir John Reveldale certainly doesn’t want Reggie Aston (the tutor) to know where he is. It’s a potentially tricky situation, and it makes for a particularly good episode. 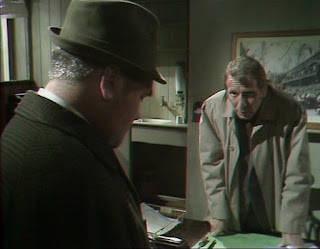 The Windsor Royal is a rose. Not just any rose though. It’s not quite the ultimate rose but it’s close to it. Two of these incredibly valuable rose bushes have been stolen, and the nursery-owner who developed the Windsor Royal hires Marker to find the culprit. Marker finds that he’s stumbled into a rather involved family drama and that family drama may be the key to the missing roses. A very entertaining episode.

It's a Woman's Privilege is another excellent episode. Frank’s landlady from his Brighton days suddenly shows up. He and Helen Mortimer had become quite close friends. Helen has a problem - she is worried that her 23-year-old son may have become involved in some kind of shady business deal. Frank will find out that accepting a friend as a client can be very awkward, and he also discovers that turning to a policeman for help on a case can be tricky, especially when the policeman in question, Detective Inspector Percy Firbank, is a friend as well. Mixing personal and professional relationships is probably something that a private enquiry agent would be wise to avoid. This is an episode in which Frank gets to do some real heavy-duty sleuthing as he becomes more and more convinced that there’s something shonky going on.

One of the many ways in which Public Eye broke the accepted rules of series television was in not always providing resolutions to a story. Sometimes Marker’s cases just fizzle out, just as in real life many of a private detective’s cases don’t actually lead anywhere. In Home and Away a woman hires Marker to find out if her husband is having an affair. What the client actually wants is however not always clear. It’s obvious that this woman is not happy with her marriage but the reasons for her unhappiness are obscure. And Marker is caught in the middle, not really knowing what he’s supposed to be doing. It’s a very low-key story, nothing really happens, and yet it’s quite a fascinating little character study.

Egg and Cress Sandwiches presents Frank with an odd case. It started with poison pen letters received by a retired general who is also a churchwarden. The letters allege sexual misbehaviour on the part of the vicar. The vicar is a new man and seems to be more interested in socialism than religion and he’s not exactly universally popular in his parish. Frank finds out that the vicar has another secret. A solid enough episode, plus it has Brian Blessed as guest star (as the vicar).

An enquiry agent doesn’t always see people at their best. In fact he often gets to see people at the very worst. Frank thinks he’s pretty hardened but even he’s a little shaken by what he uncovers in The Trouble with Jenny. It all starts with a girl in a hotel trying to gas herself.

Network’s DVD release is what you expect from them. The transfers are very good and the extras are very sparse.

A great series. Highly recommended. I’ve also reviewed the DVD release of the surviving episodes from the first three seasons - Public Eye: The ABC Years.
Posted by dfordoom at 06:54