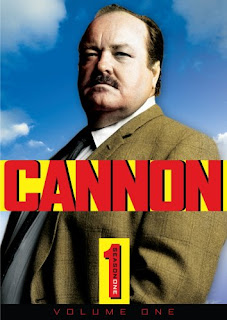 Cannon was a pretty successful private eye series which began its run on CBS in 1971. I have only the very haziest recollections of seeing a few episodes many years ago.

So far I’ve only had the chance to watch the first few season one episodes. I may return to this series at a later date.

Cannon’s biggest asset (in more ways than one) was of course its star, William Conrad. Conrad was always an enjoyable actor to watch and the role of Frank Cannon was a perfect fit.

The two-part pilot episode, perhaps surprisingly, tells us very little about Frank Cannon. We know he’s an ex-cop. In fact he had been a Detective-Lieutenant. He’s now a PI and we get the impression he’s been quite successful. He certainly seems to live a comfortable lifestyle. We assume he’s a somewhat upmarket PI.

We find out that he’s a tough guy, but he doesn’t go looking for fights (not fist fights anyway). He’s prepared to play it meek and mild if that seems the wisest course of action. He’s clearly stubborn and honest, and he has plenty of perseverance. In later episodes he becomes more of a conventional tough guy.

The pilot takes him a long way away from his usual stomping grounds (LA). An old army buddy lives in a small town interstate, or at least he did live there until he was murdered. His wife is the prime suspect and she asks for Cannon’s help. Cannon is the sort of guy who will always take on this type of case even if there’s no money in it. He wants to find his old buddy’s killer, and he seems to have a taste for rescuing damsels in distress. He immediately decides, based on zero evidence, that the wife must be innocent.

The town of Galliton used to be a happy place but it’s not like that any more. It’s been taken over by racketeering and the city government and the police have been pretty thoroughly corrupted. And Frank soon discovers that even though he’s only just arrived he’s now the most unpopular guy in town. 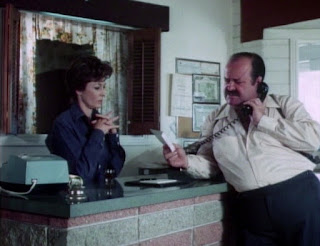 It’s a very convoluted plot and its twists and turns can be a little bit challenging to follow but on the whole it’s still a pretty good story.

The first actual season one episode is The Salinas Jackpot. It has cowboys and clowns, and it has psycho killers. It also has Cannon doing a MacGyver. When he finds himself without a gun he simply makes one! It’s very entertaining.

Death Chain is the next episode. It features an excellent performance by William Windom as a banker who reluctantly (but quite courageously) engages Cannon’s services to get him out of a jam. It’s a nicely twisted plot involving blackmail, robbery and an ingenious plan to launder stolen money. A very good episode.

Call Unicorn is a straight by-the-numbers private eye tale with Canon going undercover to investigate a truck hijacking racket. Everything in this story plays out exactly as you know it’s going to right from the start. Very disappointing.

Country Blues is a whole lot better. Country music star Woody Long is killed in a plane crash. There was a large insurance policy on his life and the insurance company engages Frank Cannon to investigate the accident. Cannon is pretty sure it was no accident but proving it will be a challenge. Everybody in his home town either thought Woody was a terrific guy or they don’t want to talk to nosy private detectives. There are people who stood to benefit from Long’s death but Cannon just can’t make any theory add up. The plot has some neat twists and turns, certainly enough to keep the viewer guessing.

There are also some wonderfully colourful characters and they have a bit of depth to them. They have complicated motivations. An extremely good episode.

Scream of Silence concerns a kidnapping gone wrong and a young boy unable to speak due to shock. There’s nothing wildly original here but it’s enjoyable viewing. 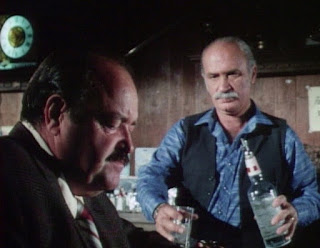 Fool's Gold takes Cannon to the small town of Julian. He’s working a case for an insurance company, on the track of $900,000 in stolen money. The people of Julian are none too friendly and it’s painfully obvious they’re hiding something. Julian is a dying town but the townsfolk are convinced that’s all going to change real soon. They have big plans to revive the town. Expensive plans. Now where would the money be coming from to finance such grandiose schemes? This is a decent episode.

Girl in the Electric Coffin involves a rock group, an aristocratic cosmetics tycoon, a missing girl and a dead PI. Since the dead PI was a friend Frank Cannon has a personal interest in this case. Another reasonably solid episode.

Cannon’s friends always seem to be getting themselves into trouble. In Dead Pigeon it’s a cop who has been framed for murder. The cop had been getting close to breaking a case involving na crooked lawyer, maybe too close. Cannon has to work with the cop’s less than sympathetic colleagues and he’s up against an exceptionally ruthless bad guy. A good episode even if the ideas are hardly what you’d call startlingly original.


Death Is a Double-Cross takes place partly on a train, which is promising, but sadly it fails to take full advantage of the setting. It’s still an OK story. Canon is hired to facilitate a reconciliation between a rich tycoon and his daughter. Cases don’t much much simpler than this one but the last guy assigned to the job got killed so maybe it isn’t so simple after all. 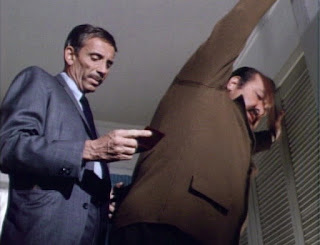 Private detectives are often hired to find missing persons. In Flight Plan Cannon is hired not to find someone, but to lose someone.The problem is that if you lose someone too successfully what happens if you suddenly need to find them again? This is one of the more interesting episodes.

Devil's Playground is a bit contrived. Ex-cop Jerry Warton (played by a young Martin Sheen) is convinced that an armed robber killed eight months earlier is still very much alive. He wants Cannon to help him find the guy. Cannon has his doubts and he’s also worried that Jerry is so obsessed that his judgment has become warped. Nonetheless he takes the case, which leads to a climax involving motorcycles, machine-guns and multiple explosions! It has its silly moments but it’s entertaining.

Treasure of San Ignacio has Cannon trying to recover religious relics stolen from a church in Mexico. A fairly routine episode. In Blood on the Vine somebody is trying to kill a boutique wine-maker and it’s a complicated family affair, but to my way of thinking the story just didn’t ring true.

To Kill a Guinea Pig is more interesting. Why are hoodlums taking an interest in a female medical researcher? She’s conducting clinical trials on prisoner volunteers and it seems that one of the volunteers is of great interest to those hoodlums.

The Island Caper is quite a fun story. Once a year a very large amount of money gets transferred from an island bank to the mainland. The transfer is done by aircraft, the aircraft being an amphibian as there’s no airstrip on the island. The bank is feeling just a little nervous this time so they’ve hired Cannon to beef up their security. And Cannon has run into an old friend on the island, an ex-con who used to specialise in exactly these sorts of complex heists. Cannon is sure this guy has gone straight but he sure does seem nervous. This is an episode in which Cannon’s methods are more than usually idiosyncratic. 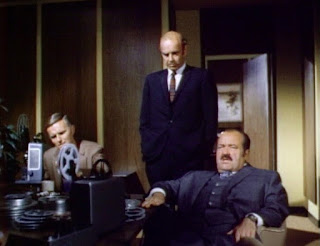 It’s no surprise that William Conrad is terrific in this series. What is surprising is that he doesn’t play Cannon as a mere tough guy. He really plays up Cannon’s sensitive side. This is a tough guy who is a real softie underneath. I know that sounds rather ominous (sensitive heroes can be remarkably annoying) but it works. Of course if you’re William Conrad you can be sensitive without damaging your tough guy status. He’s also genuinely quite amusing at times.

Cannon might be tough but he’s also very successful and very wealthy. He’s a PI who
is quite comfortable moving in the higher social circles (as well as the lower ones more usually associated with the profession). Conrad carries this off quite convincingly. Cannon is definitely not down-at-heel - he’s rich and he enjoys being rich.

My initial impression of Cannon from these episodes (I’ve now seen the first eighteen of the twenty-four season one episodes) is that it’s a decent enough series of its type. Around this time (late 60s and early to mid 70s) there were several private eye series that can be considered as genuinely ground-breaking, series like Man in a Suitcase and Public Eye (arguably the best private eye series ever made) in Britain and The Rockford Files in the US. Even the first season of Mannix can be regarded as making at least a minor effort to push the boundaries of the genre. Cannon doesn’t do any of these things. It’s content to be a straightforward and really very conventional PI series. On the other hand it’s very competently done and the best episodes (The Salinas Jackpot, Death Chain, Country Blues, No Pockets in a Shroud) are very good.

Conforming to the conventions of the genre isn’t necessarily a bad thing. What matters is that Cannon manages to be pretty consistently entertaining. Recommended.

I don’t think this series is as good as its rough contemporaries Mannix or The Rockford Files but it’s worth a look for private eye fans.
Posted by dfordoom at 04:08