Eleven Days To Zero, Voyage to the Bottom of the Sea pilot (1964) 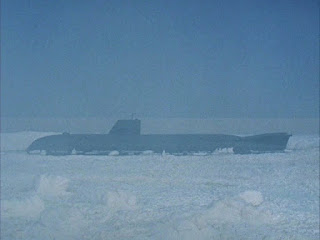 It’s always interesting to see the subtle changes between the pilot episode of any series and the series proper. As I’m now almost at the third season of Voyage to the Bottom of the Sea it’s an interesting time to look back at how it all began.

What makes it especially interesting is that there are several different versions of the Voyage to the Bottom of the Sea pilot to choose from. The Region 2 season four DVD boxed set includes as extras the original unaired version of the pilot, the also unaired recut version and the original broadcast version.

Eleven Days To Zero was written and directed by Irwin Allen and it gives us a fine taste of what is to come in the first season - plenty of action, big ideas, the fate of the world in the balance, good special effects and extremely good acting.

The world’s leading seismologist has predicted a devastating earthquake in the Arctic (presumably an undersea earthquake) that will unleash tidal waves that will devastate coastal areas throughout the northern hemisphere. Millions of lives are likely to be lost. Admiral Harriman Nelson (Richard Basehart)  and Dr Fred Wilson (Eddie Albert) however have a plan to save the world. They will detonate a nuclear device in the Arctic which will nullify the effects of the tidal waves. Admiral Nelson’s super-submarine the Seaview (which he designed himself) will carry the device to the Arctic.

It’s a dangerous plan and they only have eleven days in which to accomplish it but there’s another problem - a sinister international force is determined to prevent the Seaview from carrying out its mission. They have already assassinated the Seaview’s former captain and  they narrowly missed killing Nelson as well.

With a new captain, Commander Lee Crane (David Hedison), the Seaview sets off on its mission.

It seems that the odds are stacked against the Seaview. They face a depth charge attack from the air, they’re stalked by a hostile submarine and subjected to drone attacks. And that’s without mentioning the giant squid.

The major change in the recut version is that more focus is put on the Seaview’s new commander. In the original version it is implied that the crew don’t fully accept him at first, until he has proven himself, and that in his early career he had a reputation for being unimaginative. This sub-plot is beefed up considerably in the recut version, with the implication that Crane is a bit of a martinet and that he is initially viewed with definite suspicion by the crew. 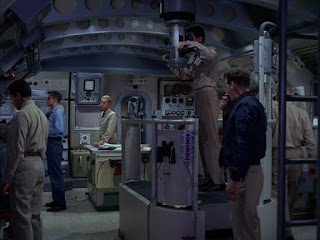 The change is a positive one, adding not only more human drama but a bit more depth to Captain Crane.

The recut version also adds the suggestion that even Admiral Nelson is not at first entirely sure he’s made the right decision in accepting Crane as commander of the Seaview.

There’s a definite Fu Manchu vibe to this episode (something I thoroughly approve of) although the chief villain also has, somewhat bizarrely, just a hint of a kind of malevolent Noël Coward about him. Either way he’s a fine super-villain.

Irwin Allen obviously realised he’d need some fairly impressive visual effects in the pilot if the series was going to have any chance of being picked up by the network. And the effects are generally extremely good, especially when you get to see the episode in colour.

Of course when you’re almost at the end of season three watching Eleven Days To Zero serves as a reminder of just how terrific Voyage to the Bottom of the Sea was in its early glory days. The combination of fairly plausible science fiction with spy thriller elements was uniquely effective and made the first season without question the best American sci-fi television of the 60s.

Whichever version you choose Eleven Days To Zero is worth seeing again.
Posted by dfordoom at 00:15