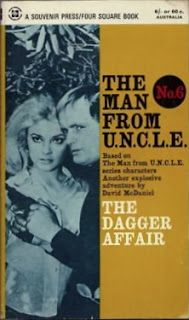 TV tie-in novels have been around for a very long time and while they have never been a consuming interest for me over the years I have read a number. I’ve never been very interested in the “novelisations” based directly on episodes of the TV series. To me that has always seemed to be a fairly pointless concept. Original novels based on TV series always seemed to be a more interesting idea.

The Man from U.N.C.L.E. may well have been the first TV series to spawn a really spectacularly successful and prolific cycle of TV tie-in novels. Twenty-four original novels were published between 1965 and 1968 and they sold in enormous quantities.

The Dagger Affair was the fourth to appear, in 1965. The author, David McDaniel, went on to write half a dozen Man from U.N.C.L.E. novels including some of the biggest sellers in the series. He also wrote a tie-in novel based on The Prisoner. McDaniel’s literary career was cut short by his early death in 1977 at the age of 38.

The Dagger Affair opens with a break-in at Illya Kuryakin’s apartment and with Napoleon Solo having a chance encounter with a girl in a fast car. Whilst racing the girl his own car develops serious engine trouble which oddly enough seems to fix itself in a short time.  Trivial enough events but they occur at the exact moment that Mr Waverley is fretting about the fact that T.H.R.U.S.H. is not up to anything. That worries him because it isn’t natural. T.H.R.U.S.H. is always up to something. If they’re not then they must be planning something big.

Solo and Kuryakin are off to Los Angeles to follow up a very slender lead. They discover that T.H.R.U.S.H. is worried as well. They’re worried about D.A.G.G.E.R. and mostly they’re worried because they don’t know D.A.G.G.E.R. is but they’re sure it’s important.

Mr Solo’s engine trouble was in fact an important clue. A reclusive and eccentric young scientist has built a device called an Energy Damper that has strange and severe effects on electrical devices, and possibly on other things as well. Like people. Eccentric is perhaps the wrong word to describe this young man. Severely paranoid and totally insane might be more accurate.

The Energy Damper has the potential to destroy civilisation. Even T.H.R.U.S.H. are horrified. They’re so horrified they’re offering to work together with U.N.C.L.E. to save civilisation. Even this may not guarantee success - D.A.G.G.E.R. is an organisation run by full-blown fanatics with a super-weapon. 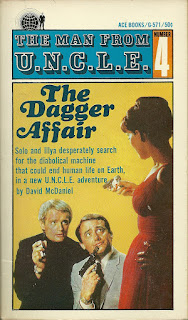 A successful TV tie-in novel needs to capture the flavour of the original TV series. If a Man from U.N.C.L.E. novel ends up being just a generic spy story with characters who happen to be named Napoleon Solo and Illya Kuryakin then (in my view) it’s pretty pointless. The Dagger Affair does a reasonably good job of capturing the necessary flavour. It’s important to note that in this case it’s the flavour of the first season of The Man from U.N.C.L.E., when the tongue-in-cheek elements were definitely present but were kept under control and the plots were at least semi-serious spy stories. They could be somewhat far-fetched but the series had not yet descended into self-parody.

That’s the feel that McDaniel achieves. The central plot device, the Energy Damper, is fanciful but can at least be made to sound vaguely plausible with enough technobabble to back it up. There’s plenty of action and it’s treated more or less the way the action is treated in the TV series, with lots of gunplay but no graphic violence (although there is some gruesome threatened violence during an extended and rather baroque interrogation sequence). Mr Solo takes a keen interest in the female of the species but there’s no actual sex. The story is handled with a moderate attempt at realism but Solo and Kuryakin get to trade wise-cracks and their characterisations are pretty consistent with their TV counterparts.

While there are moments that are gently humorous McDaniel is definitely not aiming for comedy and his approach is fairly consistent with that of the first season of the TV show.

McDaniel takes the opportunity of giving us a fascinating glimpse into the history of T.H.R.U.S.H. going back to the 19th century. Of course the novels are presumably not regarded as canon but it’s still an amusing idea that one of the founding fathers of this infamous criminal organisation was none other than Professor Moriarty! It’s a weird but fun touch.

The whole point of a TV tie-in novel is that the target audience is fans who have watched every episode and still want more and The Dagger Affair seems just like the thing to satisfy that craving. It was a huge seller so obviously in this case the strategy worked. The Dagger Affair might not be absolutely top-flight spy fiction but it’s fast-moving and it’s enjoyable in a lightweight way and it does feel like a Man from U.N.C.L.E. adventure.

I was pleasantly surprised by The Dagger Affair, and I’m encouraged enough to be seriously considering sample a few more TV tie-in novels based on 60s and 60s cult TV series.
Posted by dfordoom at 06:20