The Girl from U.N.C.L.E. - The Birds of a Feather Affair (novel) 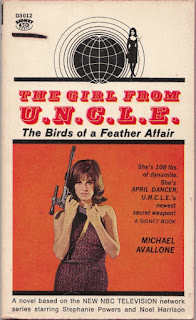 The Girl from U.N.C.L.E. only lasted for one season (from late 1966 to early 1967) but it did spawn a series of tie-in novels. There were five original novels, although oddly enough three of them were published in the UK only.

The Birds of a Feather Affair by Michael Avallone was published in both Britain and the United States in 1966. What’s immediately obvious is that the tone is rather more serious compared to the TV series. The TV series is wildly uneven in both quality and tone but generally speaking it adopts a very light-hearted spy spoof approach, and in fact at times  it degenerates into out-and-out farce.

The Birds of a Feather Affair is much closer in feel to the first season of The Man from U.N.C.L.E. which combined solid exciting spy thriller plots with a mildly tongue-in-cheek approach.

The novel does have its outlandish elements but it also has some surprisingly dark moments.

The story begins with U.N.C.L.E. agent April Dancer arriving at fellow-agent Mark Slate’s apartment to find that he’s disappeared. What she does find there is a glamorous redhead and a deadly snake. She suspects that Mark has been kidnapped by THRUSH. And then a multi-national delegation arrives and kidnaps her.

Mr Waverley has no doubts as to what is going on. U.N.C.L.E. has captured one of THRUSH’s most important agents, a man named Zorki, and THRUSH are obviously hoping to trade Mark and April for Zorki. Zorki however holds the key to a discovery so astounding and so dangerous that Mr Waverley is not willing to give him up under any circumstances. He does however have a plan to hoodwink THRUSH over the affair.

In this adventure April Dancer and Mark Slate are up against THRUSH agents who are outstanding not just for their cunning but for their deviousness and cruelty. There’s the sadistic Arnolda Van Atta and the creepy and mysterious Mr Riddle, not to mention Fried Rice and Pig Alley. Even worse, there may be treachery within U.N.C.L.E. headquarters.

The action is fairly relentless. Avallone’s style is not always polished but his pacing can’t be faulted. The action climax is effective enough.

Apart from being much darker in tone than the TV series the violence is also slightly more graphic and there are some faint hints of sexual perversity that you weren’t going to see on prime-time TV in 1966.

A successful TV tie-in novel has to get the characters right. They have to be recognisably the characters from the TV series. The difficulty with this book is that the darker tone means that some of the good-natured banter between the two lead characters is missing. April is reasonably convincing. Mark Slate perhaps does not quite have the boyish charm that he should have and he's just a tiny bit too overtly macho but overall the novel succeeds at least reasonably well on this level.

A successful TV tie-in novel normally needs to capture the tone of the TV series as well but in this case the author has obviously deliberately chosen to aim for a quite different feel. Given that the TV series suffers from taking the comic approach way too far I can’t say that I blame Avallone for his decision. He has tried to write a genuine spy thriller. It’s not that the book takes itself overly seriously, but it takes itself seriously enough to work as a piece of spy fiction. If only that more slightly more serious approach had been taken with the TV series it might have been far more successful.

The Birds of a Feather Affair isn’t great spy fiction but it’s fast-moving and exciting and it’s entertaining in a lightweight sort of way. You’re probably not going to read this novel unless you’re a fan of the TV show, but if you are a fan of the series I think it’s worth picking up. It's not quite as successful as the Man from U.N.C.L.E. novel The Dagger Affair but it can still be recommended.
Posted by dfordoom at 19:44