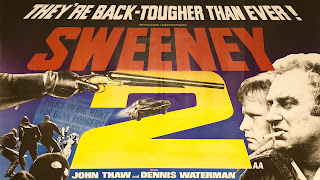 The Sweeney, possibly the best television cop show ever made, spawned two spin-off movies and both of them are slightly odd. The first of them was Sweeney! and it really bore very little resemblance to the TV series, being pretty much a generic 70s political/action thriller. Sweeney 2, which followed in 1978, is closer to the feel of the series but it has a script that loses its way badly at times.

Which is surprising, since the scriptwriter was Troy Kennedy-Martin who had a pretty good track record in both film and television (and whose brother Ian had created The Sweeney TV series).

While the first film tried to deal with political intrigue Sweeney 2 very sensibly sticks to the kind of subject matter that made the TV series so successful. Regan (John Thaw) and Carter (Dennis Waterman) are on the trail of a gang of blaggers (bank robbers). The gang has a couple of very distinctive and very puzzling trademarks. They always steal almost precisely the same amount of money, equivalent to US$100,000. Any money over and above that amount they leave behind in the getaway car. And one of the blaggers carries a sawn-off shotgun, but it’s not just any sawn-off shotgun, it’s a gold-plated Purdey (the Rolls-Royce of shotguns) worth a small fortune. What kind of person would saw the barrels off such a work of art?

The gang’s methods are particularly ruthless. It’s not that they go around shooting innocent bystanders or anything like that. But they have such an overwhelming determination not to be caught that they take suicidal risks, like driving straight into police cars at a road-block. And if a member of the gang is injured in a robbery they leave him behind, but they first make sure he’s dead (a shotgun blast to the head makes this a certainty). 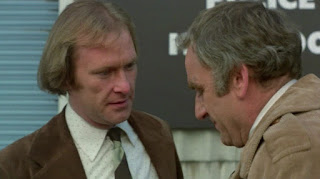 These are obviously not your usual run of villains. They’re disciplined as well as organised and they appear to be operating to some kind of master plan.

Regan’s old boss Jupp (Denholm Elliott), the former chief of the Flying Squad, is now serving a lengthy term of imprisonment for corruption but he does have an important clue to offer Regan. The clue takes Regan and Carter to Malta. That’s where these blaggers actually live. They have a compound there, which is a kind of hippie commune if you can imagine a hippie commune run on paramilitary lines. This is where the weaknesses in the script start to become apparent. The blaggers claim to have abandoned England because they believe England is finished but we’re never really told exactly what the gang’s motivations are. Are they left-wing political extremists or right-wing political extremists? Are they a kind of religious cult? Are they part of the counter-culture or are they fleeing from the counter-culture? One assumes that Troy Kennedy-Martin had some vaguely coherent idea in mind but it seems to have gotten lost in the final script.

It’s a pity since the basic idea of bank robbers with plans to build their own society is definitely potentially interesting. 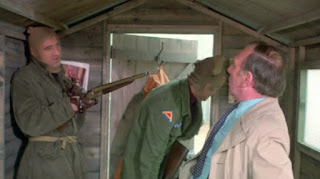 Another major problem with the screenplay is the bomb sub-plot. This comes out of nowhere, it goes nowhere, it has no connection with the rest of the movie, it makes no sense and it serves no purpose. It’s unnecessary padding and it’s a problem since this is already a movie with a few pacing problems.

Like the first movie Sweeney 2 tries to take advantage of the less restrictive censorship film censorship environment and as in the first film this backfires. Sweeney 2 has much more graphic violence than the TV series and the extra violence adds nothing of value, there’s some outrageously gratuitous nudity that is totally unnecessary, and worst of all there’s a much more pronounced atmosphere of sleaze. Regan and Carter in the TV series are a long way from being Boy Scouts but in this movie they’re drunken lecherous louts. The sleaze is pushed much too far and the characters become mere caricatures.

The supporting cast is interesting, with Denholm Elliott as the corrupt former Flying Squad commander and Nigel Hawthorne as his replacement Dilke. And yes, Dilke does come across as being remarkably like Sir Humphrey Appleby! 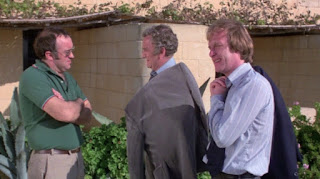 There’s some location shooting in Malta which looks nice enough. Although the Malta scenes give us some hints as to the motivations of the villains one can’t help wondering if the expense of sending a film crew there was really justified.

Sweeney 2 is a movie that definitely has its problems. It has its strengths as well. Even if the ideas aren’t fully developed the screenplay does at least try to give us something more than just another series of bank robberies. And it does set up the very violent climax in such a way that it makes sense rather than just being a bloodbath for the sake of having a bloodbath. There are lots of intriguing little touches that aren’t always fully explained but that makes them more intriguing, an example being the woman (whose link to the blaggers is rather peripheral) with the Hitler obsession. Apart from overdoing the sleaze this movie captures the feel of the TV series far more successfully than the first film. There are some fine action scenes.

The Region 4 DVD offers no extras but the transfer is pretty good.

With all its flaws Sweeney 2 is rather entertaining and it’s definitely an improvement on the first movie. Worth seeing if you’re a fan of the series.
Posted by dfordoom at 06:25