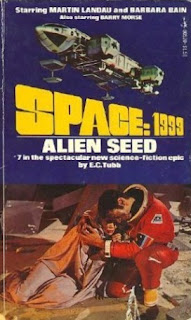 Space: 1999 spawned a very extensive series of spin-off novels which, remarkably, have continued to appear well into the 21st century. Most of the 1970s novels were novelisations, usually combining three or four episodes of the TV series into a single narrative. There were however several original novels published in the 70s, including E.C. Tubb’s Alien Seed which came out in 1976.

Given that the two seasons of Space: 1999 were rather different in format and tone (with Year Two being almost universally regarded as very much inferior to the first season) it’s important to note that this is a Year One story.

The author assumes, doubtless correctly, that if you’re reading a Space: 1999 novel then it’s virtually a certainty that you’re familiar with the TV series and that you know the basic setup - a gigantic nuclear explosion has knocked the Moon out of Earth’s orbit and turned it into a huge spaceship hurtling uncontrolled through the galaxy. The crew of Moonbase Alpha, several hundred people, survived the blast and now they’re hoping to find a planet they can colonise.

It starts as a fairly typical Space: 1999 story. An unidentified object is heading towards the Moon. It’s on a collision course and the impact could destroy Moonbase Alpha. Commander John Koenig has to take prompt action to save Moonbase Alpha, and his scientific adviser Victor Bergman tries to persuade him to find a way to save the base without destroying the object. The object is rather curious. There are no signs of life and it seems to be basically just a very large rock but it looks odd enough to raise doubts as to whether it is a natural formation, and then there are the membranous wings.

Perhaps it would have been better to have destroyed the object. As the title of the book suggests the object is a seed pod but it contains more than seeds. What it contains is very frightening indeed.

This is a story of an encounter with something very alien indeed but there’s more to it than that. There’s also the telepathy angle. At the time that the object was first sighted Dr Helena Russell just happened to be carrying out an experiment on extra-sensory perception on a very promising young female subject. This turns out to have very significant ramifications.

The ESP angle might raise eyebrows but back in 1976 the idea of ESP as a reality did not seem as crazy as it doers today and fairly respectable scientists were still inclined to keep an open mind on the subject. ESP apparently is a subject in which the author of this novel has a certain interest and he manages to introduce it into his story without too much silliness.

In fact there’s really not a great deal of silliness at all in this novel. I’m not sure that I’d go so far as to describe it as hard science fiction but it’s certainly closer to hard SF than you expect from a TV tie-in novel. There’s at least some effort to keep things vaguely convincing. Of course it’s worth remarking that the reputation of the Space: 1999 TV series for silliness is largely due to the lamentable second season while the first season was reasonably serious, quite ambitious and often surprisingly intelligent.

The characters generally behave in ways that are consistent with the characterisations in the TV series. This is crucially important in a TV tie-in novel - if you fail to achieve this consistency then you end up with just a generic science fiction novel.

The setting is used skilfully, with constant reminders that the crew of Moonbase Alpha have no-one but themselves to rely upon and have to deal constantly with the psychological dangers of loneliness and despair. John Koenig is a man who can never forget even for a moment that he bears a heavy burden of responsibility - one mistake could mean the end of the line for Moonbase Alpha and everyone in it.

The relationship between Koenig and Victor Bergman is handled well also. Bergman is brilliant but he is sometimes blinded by his scientific ardour. Koenig clearly is the man who has what it takes to be a leader, even when that means taking difficult or unpopular decisions. He feels the burden of leadership but he accepts it. That burden is something that the other characters don’t always understand and than sometimes leads to tensions.

Tubb is not a dazzling literary stylist but he’s a competent writer and he knows how to structure a story and how to keep the pacing nicely taut.

Alien Seed is one of the more successful TV tie-in novels that I’ve read. It has a slightly more serious tone than the TV series but it still feels like a Space: 1999 story. If you’re a fan of the series you’ll enjoy this book. Even if you’re not a particular fan of Space: 1999 this is still a decent science fiction novel. Highly recommended.
Posted by dfordoom at 03:59