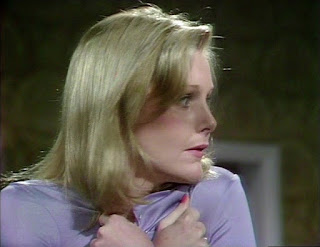 Brian Clemens had a major success with his anthology series Thriller, made by ITC and running from 1973 to 1976. The stories were psychological thrillers, very much in the style of the psychological thrillers made by Hammer Films from the early 60s to the early 70s. In fact the immediate inspiration for the series was probably a film Clemens had written in 1970, And Soon the Darkness.

Thriller went into production just before Euston Films revolutionised the look and style of British television with Special Branch and The Sweeney. Thriller belongs very much to the previous era of British television. Its in colour but has a shot-in-the-studio shot-on-videotape feel to it. The production values are not overly high. There is very little location shooting. That particular era of British TV relied very heavily on the quality of the writing, which fortunately tended to be rather high. Clemens certainly had an illustrious track record as both writer and producer thanks to The Avengers. Thriller, perhaps deliberately, has absolutely no resemblance to The Avengers in either content or style.

Clemens wrote most of the forty-three episodes himself.

If It's a Man, Hang Up kicks off the fifth season. It went to air in Britain in early 1975. In common with many of the other episodes it has an imported American star, and one who is very much of the second rank. Carol Lynley is very attractive and that’s about the best thing you can say about her as an actress. Fortunately in this episode she plays a model and we don’t exactly expect sparkling wit and intellectual sparkle from models.

Suzy Martin (Lynley) is not the sharpest knife in the drawer. When she starts getting heavy-breather telephone calls she probably should have taken the matter a bit more seriously. A young pretty woman who is a minor celebrity and lives alone should perhaps be a bit more aware of the importance of taking at least some very basic precautions to protect herself. Suzy does the sorts of things you’d expect a model to do. She’s having an affair with married middle-aged photographer Greg Miles (Gerald Harper). She’s dumped the photographer who established her reputation, Terry Cleeves (Paul Angelis), because now she’s a big name and she doesn’t need him any more.

She does have the sense to call the police about the phone calls but all she gets out of that is a few visits from a couple of not very bright constables. Being a celebrity she might have been wise to make more of a fuss and demand to talk to an inspector at least.

As you might anticipate the situation starts to escalate, the heavy breather moves on to making vague threats. And then something happens that convinces Suzy that she is in real danger.

There are lots of men around who are anxious to play the white knight and rescue this damsel in distress. There’s Greg Miles, there’s Terry Cleeves, there’s Terry’s Sicilian friend Bruno (Tom Conti), there’s the caretaker who thinks Suzy is a kind of goddess and there are the two young police constables. The problem of course is that one of these would-be white knights is the psycho killer who is stalking her, and Suzy’s judgment when it comes to men is just a little questionable at the best of times. She seems to have a knack for making decisions that she hasn’t really thought through and this is going to place her in very great danger indeed.

Thriller is a series that can be just a little clunky at times, just a little stilted, probably mostly due to the very studio-bound production methods. The acting can also be rather variable. 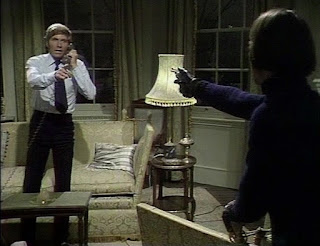 What matters here though is that Clemens muddies the waters with considerable skill, misdirecting us and encouraging us to go after the red herrings that he has deployed. It’s not an incredibly complex plot but Clemens was a pro and he keeps us guessing. Every single character is a totally plausible suspect.

Carol Lynley might not be a great actress but she does succeed in doing the one thing that she has to do. She manages to make us care about Suzy. She has her flaws and she’s not all that bright but Suzy is basically a sympathetic character and she doesn’t deserve to be terrorised. Tom Conti gives a nicely relaxed performance while Gerald Harper and Paul Angelis manage to make their respective characters just creepy enough to make them plausible suspects.

If It's a Man, Hang Up is a generally very successful episode.

The Double Kill opens with an odd encounter between a home-owner and a burglar. It gives us a hint that some kind of game is being played, possibly a dangerous game, but at this stage we have no idea what the game is.

We’re introduced to married couple Hugh and Clarissa Briant (played by Gary Collins and Penelope Horner). Their relationship is tense to say the least. Clarissa is extremely wealthy. She collects things. She collects paintings, silverware, antiques, jade, pretty much anything that’s expensive. One assumes that her purchases include her husband. They live in a rather palatial home stuffed with treasures and protected by - well actually they’re not protected by anything at all. There is no security. And the fact that the house is filled with outrageously valuable trinkets is no secret. Hugh never stops talking about how worried he is by the lack of security. He talks about it everywhere. 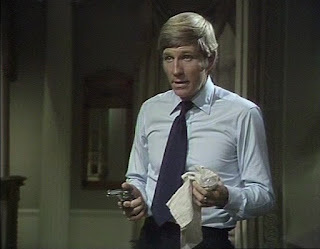 There is another odd encounter with another burglar and we start to see the game that is being played. It’s a nasty clever little game but that’s only the beginning. Other people can play games as well. All sorts of unexpected people play games in this story. You can easily find that the game you’re playing is not the one you thought you were playing.

Gary Collins is another of those second-tier American stars who feature so heavily in Thriller but he’s a pretty good actor and does an effective job. James Villiers (as Hugh’s friend Paul) has long been one of my favourite British actors of this era, always at his best when he’s being a bit morally ambiguous. Peter Bowles is another favourite of mine. He plays Superintendent Lucas, who knows a thing or two about games. Stuart Wilson is nicely ambiguous and unpredictable as Max Burns. This really is a very fine cast.

OK, you can see one of the plot twists coming but in a way that makes it more fun - it adds a delicious touch of anticipation as you can see characters making wrong moves but there’s nothing they can do about it since they don’t know that the rules of the game have changed. And there are plenty of twists that you won’t see coming.

The Double Kill is a superb episode.

Season five certainly gets off to a terrific start with If It's a Man, Hang Up and The Double Kill. Great stuff. Highly recommended.

I've previously reviewed Night Is the Time for Killing and several other season four episodes of Thriller.
Posted by dfordoom at 00:23