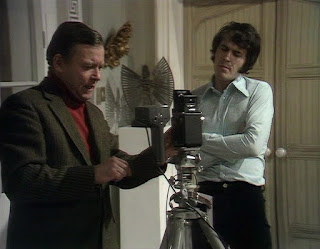 The original idea had been to do adaptations of stories by distinguished science fiction writers. By the fourth season that idea had largely been abandoned, and in fact the series seemed to be moving away from actual science fiction altogether and becoming more thriller-orientated. Irene Shubik, who had conceived the series back in 1965, had long since departed.

This was still the shot-on-videotape-in-the-studio era of British television, and although the BBC seems to have been prepared to spend some real money on the earlier seasons this fourth season is starting to get a very low-budget feel to it.

Whether To Lay a Ghost even qualifies as science fiction is very dubious. As the title suggests it’s a ghost story. This was 1971, so naturally it had to be a ghost story about sex.

Eric Carver (Iain Gregory) is a very wealthy and very trendy young photographer. He and his beautiful wife Diana (Lesley-Anne Down) have just moved into a rather nice old country house which they’re restoring. Eric and Diana are very much in love and have a perfect marriage, except that they don’t have sex. Diana was raped some years earlier and she doesn’t do sex. 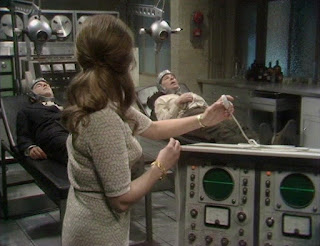 It now appears that their house has acquired a ghost. The ghost is only visible in photographs. Eric is not happy about the ghost, and you can’t really blame him since it keeps trying to kill him. Diana on the other hand is rather excited about the ghost.

Eric decides to call in professional help. Dr Philimore (Peter Barkworth) is a scientific ghost-hunter and he’s also a psychiatrist. It doesn’t take him too long to realise what is going on, and it won’t take the viewer very long either.

Lesley-Anne Down’s performance is the highlight, absolutely dripping with twisted and unhealthy sexuality. There is no way To Lay a Ghost could get made today. The obsession with sex in so much British TV of that era can be very tiresome but at least they tried to be honest about it and weren’t afraid to follow a story through to its logical conclusions.

To Lay a Ghost isn’t great television but it’s not bad.

This Body Is Mine employs a very timeworn science fiction idea, switching minds and bodies, but it at least puts the idea to reasonably good use.

Mild-mannered research scientist Allen Meredith has invented a mind-swapping machine. He’s been responsible for other brilliant inventions but he never seems to make any real money from his ideas - it’s ruthless businessman Jack Gregory (Jack Hedley) who always seems to make the money. This time Meredith is determined to get the better of Gregory. Meredith and his wife Ann (Alethea Charlton) have cooked up a clever plan. Meredith will exchange bodies with Gregory, then while impersonating Gregory he’ll make out a very large cheque to himself. 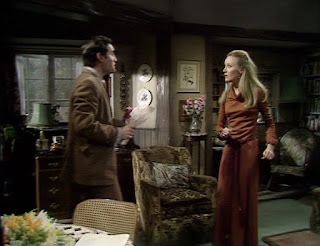 It’s a good plan but it goes wrong because Meredith doesn’t understand the sort of man Jack Gregory is and makes some colossal blunders, while Ann starts to think that ruthless hyper-masculine businessmen are a whole lot sexier than mild-mannered research scientists.

John Carson and Jack Hedley both do extremely well in their tricky roles, essentially having to play each other as well as playing themselves.

This is another episode that could not get made today. Like To Lay a Ghost it touches on issues of sexual dominance and submissiveness, in ways that might well trigger apoplexy in modern viewers.

There’s a very cynical feel to this episode, verging on black comedy. This Body Is Mine works reasonably well.

Deathday is a pure psychological thriller, and an extremely bad one. Adam Crosse (Robert Lang) is an inoffensive and rather bumbling local journalist who discovers his wife is having an affair. She taunts him with it. He instantly changes into a cold calculating master criminal planning the perfect murder, then later he changes into a guilt-ridden basket case.

The idea is presumably to make some sort of comment on the blurring of the line between reality and fantasy. Unfortunately it’s done in a very obvious and crude way. The performances are clumsy. The whole thing is utterly unconvincing. It tries to be arty but ends up being muddled and pretentious. 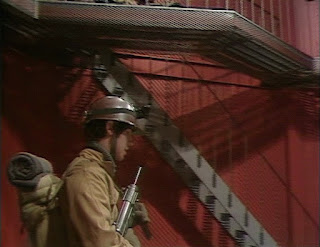 It’s yet another episode that is focused on sex. There’s some gratuitous nudity to make us think it’s all very modern and daring.

Identity seems to be a bit of a theme running through the fourth season. In Welcome Home Dr Frank Bowers (Anthony Ainley) is a psychiatrist who has been recovering in a mental hospital after a car accident. His recovery is now complete and he’s looking forward to seeing his wife again, in the picturesque little country cottage she’s been preparing for his return. The reunion doesn’t go smoothly - his wife claims that she’s never set eyes on him before and there’s another man in the cottage who claims to be Dr Frank Bowers (played by Bernard Brown).

It’s bad enough that someone is trying to steal his identity (and his wife) but it seems that there’s some vast conspiracy. Everyone seems to be involved. Even the police. He suspects it has something to do with an experimental drug he has heard about, DK-5. It’s a kind of brainwashing drug. But what could the purpose of the conspiracy be? Could an intelligence agency be behind it? Or even a foreign power? Uncovering the conspiracy is obviously vital but Frank’s main concern is for his wife. It seems likely she has been forced into playing a role in this nefarious scheme and she could be in real danger.

So we have once again an episode dealing with the mutability and fragmentation of identity. Moris Farhi’s script does some clever things with these ideas. The atmosphere of paranoia is nicely done but most importantly we’re not sure exactly what is going on and we’re not sure how much of what we’re being told can be believed. It’s not just that people might be lying. They might not even know themselves whether they’re telling the truth or not. Welcome Home is clever and disturbing and entertaining. 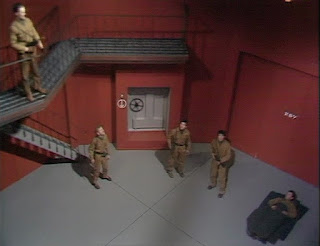 The Man in My Head is yet another exploration of identity. A team of commandos is about to blow up a power station. They have no idea what country they’re in, or how they got there. They have no idea why they’re meant to blow up the power station, or whether this means they’re actually at war with the country concerned. Consciously the commandos know nothing of their mission. They’ve been programmed by subliminal briefing. They’re little more than automatons.

Things start to go wrong when one of the commandos, Fulman, accidentally breaks the capsule implanted into his teeth. The drug triggers a second set of programming, which is the cover story in case they are captured. Fulman is now operating according to instructions that are totally contrary to the instructions under which everyone else is operating. Other tensions start to build up. Every action has been carefully planned and programmed which causes stress if things don’t go according to plan. And several of the commandos have decided not to obey their programming - but of course they may have been programmed to refuse to follow their programming. They have no way of knowing how much free will they have, if any, and no way of being sure if what appears to be happening is real or simply something they’ve been programmed to believe they are experiencing.

The script, by John Wiles, is complex and twisted. The execution of the story is helped a great deal by the superb set designed by Jeremy Davies. It’s colourful and complicated and looks very industrial and futuristic and rather forbidding but in an interestingly arty and stylish way.

The five surviving episodes of this final season are a mixed bag. Deathday is an embarrassing misfire but the other four are all quite good, and all fairly interesting. What’s particularly impressive is the thematic consistency - questions of identity, illusion and reality figure in all of the stories. The Man in My Head is my personal favourite, being both provocative and remarkably impressive visually. The fourth season has a rather different feel compared to the earlier seasons but in its own way it’s just as interesting.

Out of the Unknown was throughout its run wildly uneven in quality. Some episodes are complete and utter rubbish. Others are simply superb (The Machine Stops from season 2 is outstanding). On the whole the BFI DVD boxed set is worth getting and it includes a host of extras (including audio commentaries for eleven episodes).
Posted by dfordoom at 04:04

Email ThisBlogThis!Share to TwitterShare to FacebookShare to Pinterest
Labels: 1970s, anthology series, british tv, out of the unknown, sci-fi