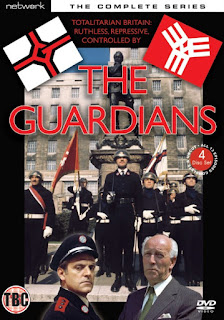 The Guardians is a dystopian political thriller series made by London Weekend Television which went to air in Britain in 1971. It has never been screened since. It was also screened in Australia but as far as I know has never been seen in the U.S.

Back in the 60s neo-nazis and fascists were immensely popular as villains in action adventure television series in both Britain and the U.S.  - television writers seemed to be convinced that there was a neo-nazi under every bed. They were usually presented as ridiculous cartoonish villains and the subject was mostly treated in a mocking way.

The Guardians was quite different. This series took itself very seriously indeed. It also refused to trivialise the subject by creating cartoonish villains. It dealt with the subject in a relatively subtle and even nuanced way. This is rather sophisticated political television.

The first episode, The State of England, raises more questions than it answers. That’s not a criticism. The intention (I assume) is to show us firstly the surface appearances of Britain as it is being transformed into a police state. We see the Guardians in action. They are obviously some kind of paramilitary political police, although whether they are actually under the effective control of the government remains doubtful. We are introduced to the Prime Minister Sir Timothy Hobson (Cyril Luckham). He seems to be well-meaning but ineffectual. He’s the sort of man who likes to think he is willing to stand up for principles, as long as he doesn’t actually have to do so. We discover that real power is in the hands of a shadowy figure known as The General. We have no idea as to his identity or the means by which he has come to wield power over the government. Norman (Derek Smith) appears to be the man who transmits The General’s orders to the Cabinet. We see news broadcasts running in the background and it is obvious that there has been a lengthy period of strikes and civil unrest. We already have reason to be suspicious of this - is this genuine civil unrest or is it manufactured by the government or by The General?

We also meet a number of other characters. Tom Weston (John Collin) is a keen and ambitious member of the Guardians. While he’s happy to kick heads in the line of duty he’s actually a jovial sort of fellow and seems devoted to his wife Clare (Gwyneth Powell). Clare has been suffering from headaches and has been seeing a top government psychiatrist, Dr Benedict (David Burke). There’s some interesting sparring between these two - Dr Benedict thinks Clare may be spying on him, Clare thinks Dr Benedict may be spying on her, Dr Benedict speculates that he has been called in because someone is taking an interest in Tom Weston.

Tom Weston is in charge of recruiting and training and he finds himself forced to accept a very upper-class recruit named Peter Lee (Robin Ellis). Tom Weston thinks that Peter Lee may not be at all what he seems to be and we’re inclined to agree with him. Is Lee a communist subversive? An agent of The General? An agent placed in the Guardians by some other group? 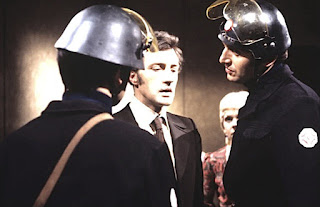 So all in all the opening episode establishes a definite mood of paranoia and conspiracy. It’s a promising opening.

As the series progresses some weaknesses do start to appear. The great danger facing a program dealing with politics is that it will succumb to the temptations of preachiness and speechifying. At times The Guardians succumbs to those temptations in a truly disastrous manner. The worst example is probably when the prime minister is dining with his old friend Sir Francis Wainwright who is now the head of the EBC (obviously a thinly disguised version of the BBC). The speeches start immediately and they go and on and on. The prime minister puts the case for the government’s increasingly authoritarian rule while the EBC chief puts forward the liberal argument for no censorship. The problem is that it’s all done in such an unbelievably clumsy manner. It’s two characters sitting in a London club and talking and talking and talking.

Just as it seems that the series has self-destructed with excessive talkiness it suddenly comes to life again and becomes truly fascinating with some wonderfully devious power plays for the highest stakes of all.

One aspect of this series that does seem dated is that the imposition of a police state is seen as being a response to a crisis caused to a large extent by waves of strikes. Of course back in the early 70s strikes really were perceived as a major threat to the social order.

There is of course a resistance movement. The series focuses partly on this resistance movement and partly on the power struggles within the government. There’s also of course a focus on certain individuals. Some of the characters are, like the prime minister, obviously important. Others seem completely unimportant but as the various plot strands come together they play increasingly key rôles.

One strength of The Guardians is that it tries to avoid painting any of the characters as either entirely heroic or entirely villainous. They’re complex people who often do not entirely understand their own motivations. They are also not entirely in control of their own destinies (although some of them think that they are). 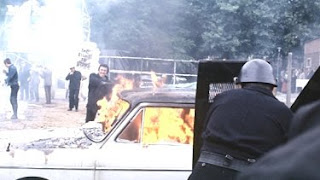 Cyril Luckham is a good choice for the rôle of the prime minister. He can be pompous and ineffectual and he can be devious and sly and Sir Timothy Hobson is all of those things. Derek Smith is delightfully slimy as the Cabinet Secretary Norman. John Collin is excellent as the rather ambiguous Tom Weston. David Burke is equally good as the very ambiguous Dr Benedict.

I was less impressed by a couple of the other cast members. Edward Petherbridge as the prime minister’s son Christopher was a bit on the irritating side. Gwyneth Powell’s performance as Clare Weston is disturbingly strange, but not in a good way. Or perhaps there’s just something about her that rubbed me up the wrong way.

There are guest appearances by some terrific character actors including two of my favourites, Graham Crowden and Peter Barkworth.

One problem this series faced was that in 1971 Dixon of Dock Green was still on television. The idea of British policemen behaving like uniformed thugs seemed too silly even to contemplate. The idea of a British government setting up a paramilitary political police force and suspending long-cherished legal rights seemed like a joke. In 1971 it sounded a bit far-fetched.

There’s some stuff about brainwashing, this being another major obsession of that time period. And there’s a considerable emphasis on the problems of crime, both ordinary crime and political crimes, and on effective and ineffective methods of dealing with these problems. This of course was a major obsession at that time - 1971 was also the year in which Kubrick’s A Clockwork Orange was released.

The Guardians has some very real strengths. It doesn’t rely on characters who are simplistic heroes or villains.

The weaknesses are perhaps not entirely avoidable if you’re going to try to address serious political issues - there are a lot of speeches. This means that we do at least know exactly what the various characters stand for but it can make for some very stodgy television.

The Guardians is one of the more fascinating attempts at making a dystopian political thriller. It has its flaws and it can get very talky but it’s intelligent and thought-provoking and  exceptionally complex. It’s an exploration of the conflicts between freedom and stability, authority and chaos, obedience and responsibility, duty and loyalty, liberty and order. It does not try to persuade us that there are easy answers.

The Guardians has been released on DVD in the UK by Network. It is well worth a look.
Posted by dfordoom at 05:26