The Avengers #6 The Drowned Queen (novel) 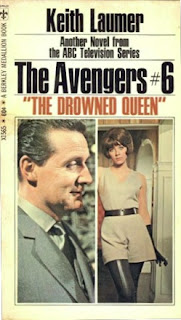 Like most successful television series of its era The Avengers gave rise to a number of tie-in novels. These seem to have all been original novels rather than novelisations of episodes. The cover of The Drowned Queen indicates that it was the sixth Avengers novel but in fact there had been eight previous novels, not all of them from the same publisher. And some of the Avengers novels seem to have been published only in the US while others were only available in the UK so it does get a mite confusing. The Drowned Queen was the first of the Avengers novels to feature Tara King.

The Drowned Queen is certainly very ambitious. Steed and Tara King have gone undercover as crew members on the Atlantic Queen which is making its maiden voyage across the Atlantic.  The Atlantic Queen is not however a conventional ocean liner. It is a submarine ocean liner! It carries two thousand passengers and will make the entire voyage submerged. Trouble has been threatened, hence the presence of Steed and Tara on board.

It soon becomes evident that there is indeed a plot to sabotage the vessel. In fact there may be multiple conspiracies. When Steed engages the chief engineer in conversation he discovers that there may also be real questions about the submarine liner’s safety, even in the absence of sabotage.

There’s a reasonable amount of action and there is some genuine excitement. There’s also the kind of high-tech stuff and gadgetry that you normally get in a Bond movie but that was beyond the budget of a TV series in the late 60s. There is actually a bit of a Bond movie flavour to this tale.

Steed will have to learn to pilot a midget submarine and to deal with Hindu magicians, boa constrictors, pet sharks, predatory widows, card tricks, dangerous blondes and mermen. Steed is very much the hero here with Tara unfortunately playing a somewhat secondary rôle.

I’ve read a number of TV tie-in novels from the 60s recently and I’m starting to realise that writing an original novel based on a TV series was actually a lot trickier than you might think. It’s not that easy for a writer to take characters developed by another writer and keep the characterisations consistent and it’s even more difficult when the characters were originally created in a different medium. A related challenge is to capture the tone of the TV series.

The Drowned Queen doesn’t quite succeed in these two respects although it’s a brave attempt. The author, Keith Laumer, was an American and that might have been the problem. Although it achieved some popularity in the United States The Avengers was one of the most quintessentially English TV shows of the 60s (in fact that was probably a large part of its appeal to American audiences). To get the authentic feel of Steed and Tara as characters probably was something that required an English writer.

On the other hand Laumer does get the right mix of action, adventure and humour. And he is fairly careful not to descend to slapstick, which would have been quite wrong for an Avengers story, and he does try to avoid taking an overtly American approach to the humour.

One of the interesting challenges of a tie-in novel like this is that there is the opportunity to go beyond what could be done on television at the time. That’s both an opportunity and a danger if you take it too far or start moving in a direction that conflicts with the essential character of the TV series. In this case we have an author who was a reasonably successful science fiction writer so it’s no real surprise that he gives us a story that pushes things more overtly in a science fictional direction compared to the series (although the series most certainly dabbled in science fiction). He also takes the opportunity of giving us a story on a larger scale than would have been possible on 1960s television. The Drowned Queen would have required special effects that would have been out of the question on TV. So it is intriguing to see a story that explores possibilities that the TV series could not have explored.

The question is, does Laumer go too far? Has he created a novel that is just too science fictional to be an Avengers story? I don’t really think so. While he was certainly writing a science fiction novel he was aware that it was supposed to be an Avengers novel so he’s careful not to get bogged down on technical stuff and he (quite rightly) isn’t the slightest bit interested in making the story scientifically plausible.

The Avengers could be outrageous but it always managed to avoid descending into mere silliness. Laumer mostly tries to avoid mere silliness as well, and mostly he succeeds. He doesn’t quite manage the wit of the TV series but the book is fairly amusing. It’s also fast-paced and it’s definitely fun. If you’re a fan of the series it’s recommended.
Posted by dfordoom at 06:08