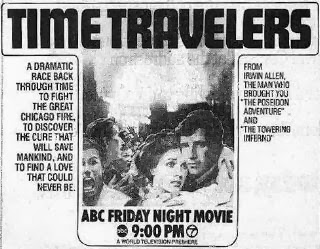 Time Travelers is more than a little unusual in being a collaboration between Irwin Allen and Rod Serling. It’s a TV-movie that was actually made in 1976 as a pilot for a TV series that never eventuated. Irwin Allen had had some success with his 1960s series The Time Tunnel. The Time Tunnel achieved very good ratings but was cancelled after a single season due to some rather unfortunate bungling by network executives. Irwin Allen clearly thought (probably correctly) that the time travel idea still had potential.

The script for the pilot was written by Jackson Gillis from a story by Rod Serling but in fact it’s obvious that Irwin Allen had considerable input since the end result clearly bears a fairly close resemblance to The Time Tunnel.

A frightening epidemic has struck the United States. The cause is obscure and the mortality rate is extremely high. It appears to bear an uncanny resemblance to a disastrous mid-19th century epidemic. Scientists like Dr Clint Earnshaw (Sam Groom) are convinced it’s the exact same disease. A Chicago doctor by the name of Joshua Henderson had apparently had some startling successes in treating the illness back in the 1870s. Almost all his patients recovered whereas almost all of every other doctor’s patients died. It seems that despite the primitive state of medical knowledge in the mid-19th century Dr Henderson had somehow stumbled upon the cure.

Sadly all of Dr Henderson’s records were destroyed in the infamous Chicago Fire of 1871, If only it were possible to travel back in time to talk to Dr Henderson! To his considerable surprise Dr Earnshaw is contacted by a man who claims that such a thing is possible. The man, Jeff Adams (Tom Hallick), gives the impression of being more of a cowpoke than a scientist. Jeff invites Dr Earnshaw to fly with him to a secret location where a top-security research establishment is to be found. Of course the man is obviously some kind of lunatic, but lunatics are not usually given access to jets by the White House and they don’t usually work at research institutions run by Nobel Prize winners. Maybe this guy isn’t a lunatic after all. 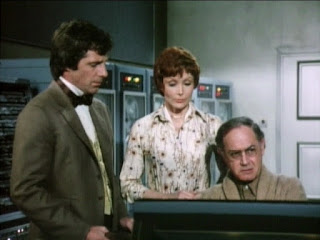 A few hours later Jeff and Dr Earnshaw are in Chicago, and it’s 1871. The only problem is they were supposed to arrive on October 4 but it’s actually October 7, so in just over 24 hours the whole city will be an inferno and any chance of contacting Dr Henderson or seeing his records will be lost. It’s a race against time!

Irwin Allen’s enthusiasm for science fiction was longstanding but this story taps into his later and even more famous obsession, disasters. In fact it’s as much a disaster movie as a sci-fi movie. The Chicago Fire of 1871 was a very big deal, raging for three days and killing 300 people.

My first impression is that the main set in the time travel complex in The Time Tunnel was much more impressive. The Time Tunnel’s control centre looked expensive and stylish and lavish whereas the equivalent in Time Travelers looks small and cheap.

The period stuff in 1871 Chicago is done reasonably well. As with The Time Tunnel Allen relies heavily on footage from earlier 20th Century-Fox movies, in this instance the footage coming from the 1937 In Old Chicago. The period scenes make very effective use of outdoor sets built for Hello, Dolly!

You’ll come across some people who will try to tell you that everything good about this TV-movie is due to the great Rod Serling, and everything bad must be due to the awful Irwin Allen. That’s plausible if you’re a true believer in the Rod Serling cult, which I most certainly am not. Serling has always struck me as a wildly overrated writer who took himself incredibly seriously and was over-praised by critics. I’m always inclined not to subscribe to the popular view that Irwin Allen was a hack. Most of his TV series actually started very well, with quite good concepts, and then got progressively ruined by ill-judged interference by network suits. Even Lost in Space was genuine science fiction for the first few episodes. The Time Tunnel had been a pretty decent series and Time Travelers is essentially a remake of that series. 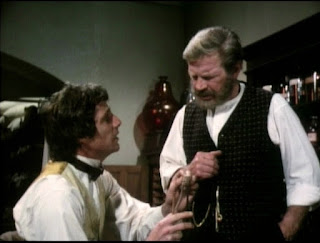 Time Travelers deals with time paradoxes exactly the way The Time Tunnel dealt with them. It doesn’t agonise over all the scientific details but it does make it clear that you can’t change the past. Even when you think you can it turns out to be an illusion. History stubbornly refuses to get changed.

Time Travelers deals in greater depth with an issue that The Time Tunnel did touch upon in some episodes, namely the basic overwhelming tragedy of time travel. As a time traveler you’re interacting with people who are in fact already dead. You might grow to like them, you might even fall in love with them, but if history has doomed them there’s nothing you can do about it. You can’t bring them back to the present day, and you can’t elect to stay in the past permanently yourself. It’s not just that the people you’re interacting with are long dead, it’s also that the societies you visit are long dead as well. You might think you’d like to stay in 1871 Chicago forever but you can’t. These things would clearly be a very major emotional issue for any real-life time traveler and Time Travelers deals with them sensitively but without wallowing too much in sentiment.

Time Travelers doesn’t have any actual action sequences but it has effective dramatic tension and it manages to achieve suspense even when you know, as the characters, know, some of what is going to happen. It has at least some emotional depth. It’s reasonably well thought-out science fiction. The premise that a doctor a hundred years ago had somehow stumbled upon a great medical breakthrough might be a little far-fetched but it has to be said that it’s developed fairly logically and sensibly. 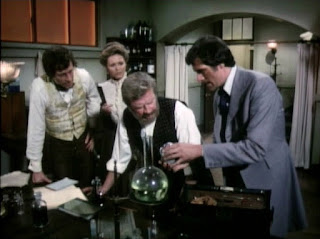 In fact I get the feeling that this was the kind of reasonably intelligent TV science fiction that Irwin Allen was always hoping to do. He was destined always to be thwarted, always forced by commercial pressures and network interference to accept a massive dumbing down of his original concepts.

Unfortunately with Time Travelers he found himself thwarted once again with the network declining to pick it up as a series.

Time Travelers is offered as an extra on the Time Tunnel DVD set (at least it’s included in the complete series set although I’m not sure about the half-season sets). The transfer is not fantastic but it's perfectly watchable and since it's a free bonus feature I guess we shouldn't complain.

Time Travelers is on the whole surprisingly satisfactory. Recommended.
Posted by dfordoom at 05:33