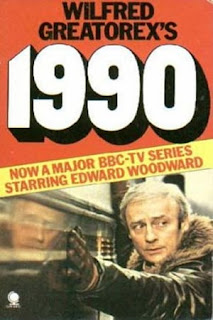 1990 is a dystopian drama series made by the BBC. The first season went to air in 1977 with a second season following in 1978. The series was created by Wilfred Greatorex who had a notable career as a writer and producer on British television from the 60s to the early 80s.

The first episode, Creed of Slaves, doesn’t give us too much information. It’s obvious that Britain has an increasingly totalitarian government and that the main agent of repression is the Public Control Department (PCD), operating as part of the Home Office.

Most of the media is controlled by the government but there are still a few independent newspapers and there are still a few journalists willing to criticise the government. The most notorious such journalist is Jim Kyle (Edward Woodward). Kyle is clever and cautious, he’s very tech-savvy (he has some useful little devices that make it more difficult for the PCD to keep track of him) and he has a highly placed source within the government. Kyle is a thorn in the side of PCD director Herbert Skardon (Robert Lang). At this stage Skardon is using one of his deputies, the glamorous Delly Lomas (Barbara Kellermann), to try to manage Kyle. The idea is for Delly to use her feminine wiles to persuade Kyle to moderate his criticisms of the government.

This is a Britain sliding towards totalitarianism but not yet there. It’s at the point where dissidents are subject to serious harassment and the freedom of the press has been somewhat curtailed.

Kyle is involved with a group that is trying to get people out of the country. Emigration from Britain is pretty much banned. Rather oddly the series chooses to focus quite a bit on this subject of illegal emigrants, but most of them appear to be middle-class people who simply want to leave Britain because they could earn more money in the U.S. and it’s hard to feel much sympathy for them. The idea of smuggling people out of the country does lend itself to some suspenseful situations which are handled quite effectively in episodes like Decoy.

The main interest is the series of overlapping power struggles. Delly Lomas wants Herbert Skardon’s job as Controller and she wants it now. The other deputy controller, Tasker, wants Skardon’s job as well. 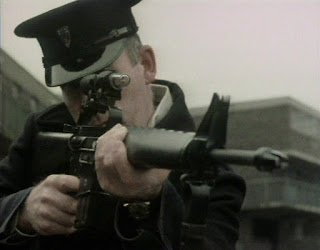 Kyle is mixed up in these power struggles because he has very ambiguous but definite PCD connections. He has helped them in the past. In fact they’ve never been quite sure if he’s an ally, a potential ally, or an enemy.

And then there’s his ambiguous relationship with Delly Lomas. Not a romance, but perhaps with that potential. Not quite a professional relationship. Essentially they’re both trying to use the other without getting used themselves and without getting emotionally entangled. It’s a dangerous game and we wonder which of them is going to turn out to be the better player.

Delly is clever, ruthless and entirely lacking in any kind of moral sense. She is driven purely by ambition. Skardon isn’t much better but he does seem to have some vague belief in the necessity of the repressive system he serves. The only thing Delly believes in is Delly’s career. Or at least that’s what she had always thought but now there’s the troubling possibility that she may be getting emotionally involved with Kyle.

The acting is the greatest strength of this series. Edward Woodward is excellent. Kyle is an interesting mix of cockiness and extreme caution and he’s a decidedly ambiguous character. Is he a brave and dedicated fighter for freedom? We know he’s a journalist so we’re inclined to suspect that he has no actual morals, that it’s all a game to him. Woodward shows great skill in maintaining that edge of ambiguity.

Barbara Kellermann is extremely good also. Delly is more clearcut. Her motivation is ambition and she’s untroubled by moral considerations. She’s clever but the question is whether she has the experience to beat an old hand like Skardon. 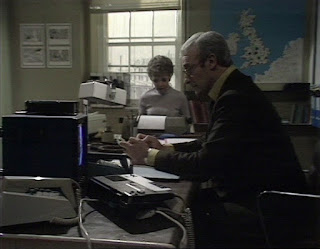 Robert Lang always did sinister characters well and he does a fine job as Skardon.

One thing that is interesting is that this series makes no attempt to disguise the nature of the government. This is clearly a Labour Government. The vicious Home Secretary is a former trade unionist, obviously working class. This is quite explicitly a leftist totalitarianism. It is mostly an old-fashioned leftist totalitarianism, obviously modelled on the old Soviet Union. The series has quite an old-fashioned feel to it.

This is the grey depressing world of Orwell’s 1984. but without most of the really interesting insights included in Orwell’s novel. The repressive measures enacted by the government in 1990 seem crude and amateurish and unimaginative. The idea of using psychiatry for social control was topical in the 70s, being a method favoured by the old Soviet Union, but 1990 does nothing interesting with the idea. The third episode, Health Farm, deals with mind control verging on mind destruction but in a superficial kind of way without any of the refinements of evil that Orwell gives us in 1984. The final episode of the first season is pure Orwell.

The problem is that this is a future society that was very plausible in the 1940s when Orwell wrote 1984. It was perhaps still plausible, but only just, in 1977 when this series was made. To a viewer today however it seems very 1940s. 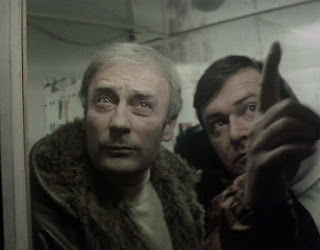 The fact that 1990 deals with a totalitarianism not yet firmly established does add some dramatic possibilities. The danger with dystopian dramas is that everything seems too hopeless, there’s too much wallowing in despair. But in this case the struggle is not entirely unequal. The PCD has wide powers, but they’re not unlimited. Skardon does have to be careful not to overreach himself. The press has been mostly muzzled, but not totally. Kyle does have the ability to make life miserable for the PCD and for the Home Secretary.

It’s also quite strong on the psychology of repression. The types of people who end up joining the secret police are always the same and in an episode like Whatever Happened to Cardinal Wolsey? we get an extraordinarily chilling example in the person of Inspector Jones (Frank Mills).

It’s intriguing to compare this series with the other notable 1970s British dystopian television series, The Guardians, made a few years earlier. The Guardians seems much less dated, much more complex and subtle and much more relevant to today’s world.

1990 has been released on DVD in Region 2. It's a series with some definite flaws but the acting is excellent and it's worth a look if dystopian thrillers are your thing.