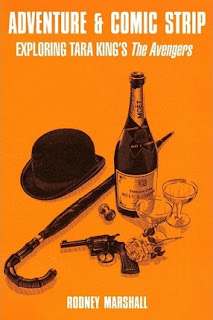 There have been quite a few non-fiction books on The Avengers, but not too many dealing specifically with the Tara King era. So that in itself is a strong recommendation for Rodney Marshall’s 2013 tome Adventure and Comic Strip: Exploring Tara King’s The Avengers. An even better recommendation is that Marshall takes a very favourable view of this period of the show’s history.

Having said all this I’m not entirely sure I can recommend this book. The big problem is that it’s kind of thin. There’s really not much to it. Basically it’s just an episode guide, and not a very detailed one. On the plus side he doesn’t give us just a synopsis of each episode. There is a bit of analysis. It’s not too in-depth but it’s a bit more than just fanboy gushing. On the whole he avoids pretentious academic jargon and he generally doesn’t try to ram his political views down the reader’s throat (which is a very unusual thing for a book published in our modern age).

The episode guides are reasonably stimulating and he shows a real understanding of the appeal of the series.

The biggest plus is that Marshall doesn’t start out with the prejudice that of course the Tara King era was inferior to the Emma Peel era and that of course Linda Thorson was a poor replacement for Diana Rigg. Marshall approaches the series with an open mind and finds a great deal to like about the Tara King episodes. Since I happen to be a very big Tara fan this naturally inclines me to approve of the book.

You just can’t get away from the fact that there’s not a great deal of text here. And there are no illustrations.

Marshall is incidentally the son of Roger Marshall, one of the great British television writers of the 60s and 70s.

Adventure and Comic Strip is a welcome reassessment of a much maligned period of the history of one of the great television series so I’m inclined to recommend it in spite of its thinness.
Posted by dfordoom at 03:56