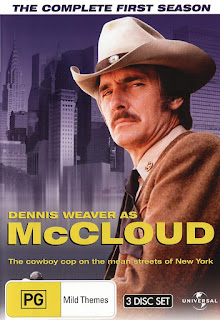 The 1970s was a real golden age for American TV mystery/detective series. There were good 70s cop shows and good 70s private eye shows but the most enjoyable and most characteristic American 70s crime shows were the puzzle-plot murder mysteries in which a brilliant detective matches wits with a brilliant criminal. Columbo was the most famous of these series but Ellery Queen and Banacek were every bit as good, and McMillan and Wife had its moments.

And there was also McCloud. It ran for seven years on NBC so it was one of the most successful of the genre.

What all these series had in common, apart from obvious structural similarities, was that they had colourful and charismatic detective heroes. McCloud certainly qualifies on both counts. Sam McCloud is a Deputy Marshal from a one-horse town in New Mexico. An important case takes him to New York City and for reasons which never really make sense he ends up being on more or less permanent loan to the NYPD. The NYPD isn’t quite sure what to do with him, he can be a bit of an embarrassment but on the other hand he does keep on solving major cases for them.

Dennis Weaver had had a long career already by this time but in McCloud he demonstrates considerable and hitherto unsuspected star quality. When you take Weaver’s performance, combine it with the fish-out-of-water country hick teaching the city slickers a thing or two theme and some fairly solid scripts you have the ingredients for a pretty entertaining series.

Portrait of a Dead Girl was the pilot episode. Deputy Marshal Sam McCloud has to track down a witness who has ignored a subpoena. He finds him in the wilds of New Mexico. McCloud is not altogether thrilled at the idea of having to escort the prisoner all the way to New York, but McCloud always does his duty.

The witness, James Waldron (Shelley Novack), may be able to give evidence that would overturn the conviction of Luis Ramos for the murder of a beauty queen. Or his evidence may have an entirely different effect. No-one knows but clearly someone does not want Waldron to testify since he is kidnapped as soon as he arrives in New York. This is pretty embarrassing for McCloud and he intends to find the kidnapped witness and those responsible for snatching him. 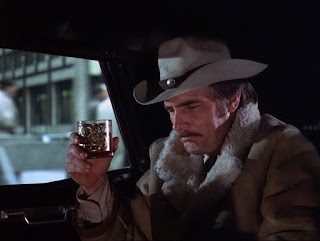 McCloud’s presence in New York is unwelcome to chief of detectives Peter Clifford (Peter Mark Richman). Ramos’s defence attorney Del Whitman (Craig Stevens) also seems disturbed by McCloud’s presence. The one person who is delighted by McCloud is journalist Chris Coughlin (Diana Muldaur). She’s written a book on the beauty queen murder but she doesn’t seem to care if McCloud finds evidence to discredit her book. She finds him fascinating and she’s a good enough reporter to know that Sam McCloud is good copy and hanging around with him will undoubtedly be useful to her career-wise.

The plot is pretty far-fetched. It also has some political overtones and that’s something that American television invariably did poorly.

Dennis Weaver was already well known to viewers from his rôle in the long-running Gunsmoke series. McCloud made him a bona fide star. He’s perfect as the Deputy Marshal from New Mexico. He doesn’t overdo the wide-eyed innocence and he doesn’t overdo the dumb hick thing. Sam McCloud finds New York to be a very strange place but he’s a smart cop and he learns quickly and he’s nobody’s fool. To some extent he uses the Columbo technique of persuading suspects to underestimate him.

Diana Muldaur is a semi-regular character in the series and provides a love interest for Sam McCloud as well as managing to get him lots of publicity which gets him into constant trouble. She’s pretty good. Terry Carter as Sergeant Joe Broadhurst plays the sidekick rôle and does it fairly effectively.

Portrait of a Dead Girl doesn’t quite gel for me, partly because I just didn’t but the central plot idea as being plausible. But it does introduce Sam McCloud effectively enough. 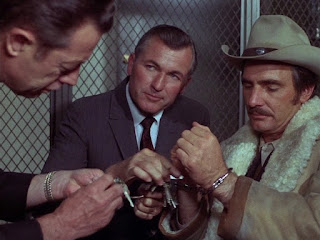 The first episode of the first season proper is Who Says You Can't Make Friends in New York City? McCloud has been posted to Peter Clifford’s precinct in New York to learn about big city policing. I have no idea why a Deputy Marshal from New Mexico would need to learn such things but the premise of the whole series is that it’s about a hick cop in the big city so some justification for his continued presence had to be cooked up. McCloud proves to be a bit of an embarrassment to Clifford who is overjoyed when he finds an excuse to ship McCloud back to New Mexico. The only problem is that McCloud refuses to go until he’s cleared up the case he’s stumbled into.

Horse Stealing on Fifth Avenue is about actual horse stealing on Fifth Avenue, and it’s about a gunman who won’t kill. It’s an offbeat tale and it plays to the strengths of McCloud as a character - he gets to crack a few down-home jokes, he gets to demonstrate his gift for understanding and empathising with people and he gets to approach a case in his own inimitable and unconventional way. And he gets to play the climactic action scene on horseback!

The rodeo comes to New York in The Concrete Corral and McCloud is assigned to keep an eye on the cowboys. He’s pretty annoyed by this since he’d rather be chasing actual criminals but he’ll find plenty to keep him occupied with those cowboys, especially when their dramas lead to murder. And McCloud finds that when you have to track down a country boy it’s a definite advantage to be able to think like a country boy yourself. A decent episode.

The Stage Is All the World plunges McCloud into the world of the theatre where a megalomaniac producer is receiving death threats but he has a track record of publicity stunts so the threats may or may not be bogus. The threats still have to be taken seriously, and McCloud is inclined to think there really is a tragedy brewing. A pretty solid episode. 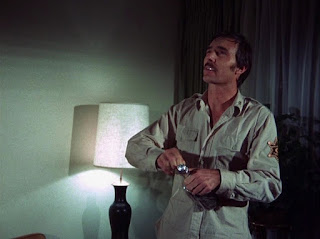 In Walk in the Dark McCloud gets assigned to an all-female squad for training. As you might expect there’s a fair bit of politically incorrect humour (in fact there’s quite a bit of political incorrectness in this episode, this being 1970 when it wasn’t necessary to tread so carefully). McCloud fears he’s going to be stuck investigating shoplifting incidents but in fact he finds himself in the middle of a multiple murder case, with one of the victims being a policewoman. He’s not supposed to be on the murder case but when Sam McCloud is given an instruction he tends to interpret it rather loosely. He also finds time for some romantic dalliance with a pretty young policewoman (played by Susan Saint James). There are some interesting moral subtexts to this story, subtexts you would never get away with today, wth McCloud being less than happy about young women being used as bait for a murderer. It’s a good story with a solution that is a bit far-fetched but still quite clever.

A word of warning in regard to the DVD releases of McCloud. After their original broadcast the six first season episodes were clumsily edited together into three feature-length episodes. The editing was done so badly that some of the original writers and directors subsequently had their names removed from the credits in disgust. The original hour-long episodes were later lost. When McCloud was released on DVD in the U.S. only the butchered movie-length versions were available and and so those were the ones issued on DVD. Then Madman Entertainment in Australia located the original hour-long versions, which fortunately were in excellent condition. Madman’s Australian DVD release of the first season includes both the original hour-long versions and the edited feature-length versions. So if you’re going to buy the first season on DVD the Madman release (which is in print and easily obtainable in the U.S.) is the only one to consider buying. Of course you’ll need to remember that the Madman release is Region 4.

McCloud isn’t quite in the same league as Columbo or Banacek but it’s still very enjoyable viewing and it’s recommended. There you go.
Posted by dfordoom at 00:42