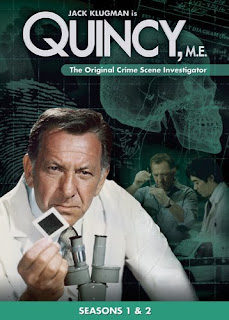 The title character is a Los Angeles Medical Examiner and we very soon discover that he’s a chronic trouble-maker. Quincy just can’t help himself. He’s never satisfied. If a post-mortem establishes a cause of death with 99% certainty that’s not good enough for Quincy. He’s a natural contrarian. He’s argumentative. He ignores instructions from his superiors. He antagonises the police. He can’t stop himself from playing amateur detective. He’s a complete nightmare, and the worst thing about him is that he’s usually right.

To play a rôle like this you need an actor who can be cheerfully obnoxious and still be likeable and sympathetic and Jack Klugman was the perfect choice. He plays Quincy with manic intensity and single-mindedness but still manages to convey to us that Quincy is basically a good-natured overgrown kid.

This series is often seen as a forerunner of later crime series focused on forensic science.

Quincy’s boss is Dr Robert Asten (played with oily smarminess by John S. Ragin). Asten might be a doctor but he’s a bureaucrat by nature and he and Quincy clash constantly. Quincy despises Asten as a pen-pusher and Asten regards Quincy as a gratuitous trouble-maker. 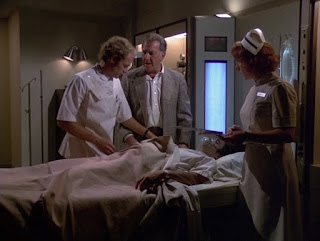 Quincy’s private life is not surprisingly somewhat chaotic. He and his girlfriend have a very 1970s no-commitments relationship.

As with the other Sunday Mystery Movie series production values are consistently high.

The Episode Guide
Go Fight City Hall... to the Death starts with a routine case. A girl has been raped and murdered on a beach and shortly afterwards the killer is gunned down by a cop. It’s an absolutely open and shut case but Quincy is obsessed by a couple of irritating small details. The perpetrator shot and wounded by the cops just doesn’t seem like a guy powerful enough to snap a girl’s neck, plus his hands are kind of small and the marks on the victim’s neck suggest large hands. The police are exasperated. They have a straightforward case and they have the suspect in custody and Quincy is making trouble for them. And then there’s a suicide at City Hall and it’s just as straightforward and Quincy has to go and make trouble about that case as well.

It’s the third death that really gets Quincy wound up.

There’s not really much in the way of actual technical forensic science stuff in this episode. Quincy solves the case mostly by having the sort of suspicious mind that notices things that form a pattern. The plot is solid enough. You might find that the the action climax stretches credibility a bit - Jack Klugman is an unlikely action hero and it seems a bit out of character. On the other hand the producers presumably felt that an action climax was needed and they got one.

In Who's Who in Neverland Quincy’s boss Dr Asten makes a mistake that could be more than embarrassing. It’s a mistake that could be career-ending. He releases a body to the funeral home and the body is immediately cremated. The problem is that the body was not properly identified, all the paperwork was phoney and Quincy had intended to do an autopsy because he was not satisfied about the cause of death. Now it turns out the woman was a celebrity and the whole thing looks less and less like death due to natural causes and all hell is going to break loose unless Quincy can solve the mystery of the woman’s death and solve it quickly. 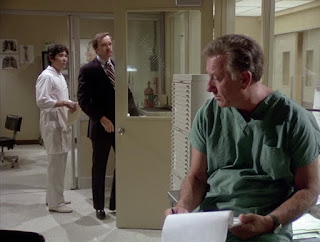 A Star Is Dead concerns a dead movie star, dead in circumstances that are highly ambiguous. Suicide is entirely possible, but so is murder. And accusations are being levelled at a smooth-talking congressman who happens to be an old buddy of Quincy’s. There are very important people wanting to protect the congressman and very important people wanting to bring him down. And there’s the editor of a scandal sheet who would be happy to bring Quincy down as well.

Quincy gets personally involved in this case, perhaps to a dangerous degree. At times it does appear that his judgment has been clouded by his personal feelings. But that’s Quincy. That’s the way he rolls. It’s a weakness but it’s a strength as well. He relies on gut feelings. On the other hand he is a scientist and he backs up his gut feelings with hard evidence.

This episode is the first to feature a courtroom scene. OK, not quite an actual courtroom, but a formal coroner’s inquest. And Quincy produces the kind of courtroom pyrotechnics that would make Perry Mason proud.

If there’s a weakness to this series it’s the sensationalistic endings, but then this is television and it’s in the business of providing exciting and highly dramatic climaxes and while they might be sensationalistic they are fun. There’s not much scientific stuff in this story but it’s certainly entertaining. 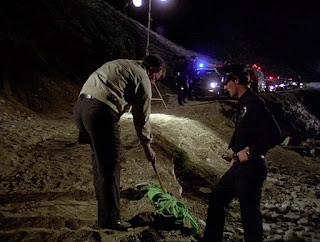 Hot Ice, Cold Hearts sees Quincy and his girlfriend Lee on vacation. And of course the first thing they encounter is a dead body. A young man who was stung by a stonefish. The odd thing is, there are no stonefish within 6,000 miles of California. That’s pretty suspicious but when Quincy wants to do an autopsy he hits a brick wall. The local authorities refuse to coöperate. Needless to say that doesn’t stop Quincy. It does slow him down a bit though. The second corpse manages to get the attention of the local sheriff. It’s all connected with the spectacular jewel robbery which took place in the opening scene.

It’s not just a robbery but an enormous criminal conspiracy. Quincy’s stubbornness is the only thing that might derail the conspiracy, if he can overcome the obstacles that just keep on appearing in his path. This one’s pretty outrageous but it has lots of action and it’s non-stop fun.

Final Thoughts
Quincy, M.E. is very much in the tradition of the terrific mystery series that American television produced in such prodigious quantities in the 70s. And it’s a fine example of the breed. The first season plots can be a little over-the-top but they’re executed with style and energy and they work.

The first of the DVD boxed sets includes the four movie-length episodes and season and the next thirteen one-hour episodes as well.

While this may have been the forerunner of so many later forensic science-based crime series Quincy, M.E. is mercifully free of the gratuitous gruesomeness that later came to define the genre.

A very entertaining series. Highly recommended.
Posted by dfordoom at 23:12