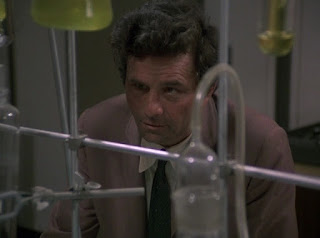 The final two episodes of Columbo season five, screened in 1976, were the excellent Now You See Him and the controversial Last Salute to the Commodore.

I’m particularly enamoured of murder mysteries that involve stage magic. Magic and murder just seem to go so well together. Now You See Him is a very good example of this sub-genre.

The celebrated illusionist the Great Santini (Jack Cassidy) has a pretty good alibi for the murder of his business associate Jesse Jerome. At the time of the murder Santini was locked in a metal trunk suspended in a tank of water. That’s pretty much the ultimate alibi. Except that, as Santini cheerfully admits, how much store is anyone going to put in an alibi for an illusionist. Maybe he was in the trunk during the trick. Maybe he wasn’t. He’s an illusionist, so really he could have been anywhere!

In fact the method by which the trick is worked is a fiercely guarded secret. Apart from Santini himself his daughter Della (Cynthia Sikes) knows the answer. And neither of them has any intention of revealing the secret. So Columbo has a suspect who may or may not have an airtight alibi.

Jack Cassidy was an extraordinary larger-than-life style of actor and in this episode he gives a particularly extravagant performance. Which of course is exactly as it should be. Santini is a very smart guy, his professional career (and a very successful career it has been) has been based on his ability to fool people and he has also been able to guard some very deep and dark personal secrets. He’s exactly the type of hyper-confident and fiendishly clever suspect that we love to see matching wits against Columbo.

The magic tricks are not there just to provide an exotic background. They’re an integral part of the plot. Michael Sloan’s script works perfectly. Everything in this story works perfectly. Now You See Him is a delight. 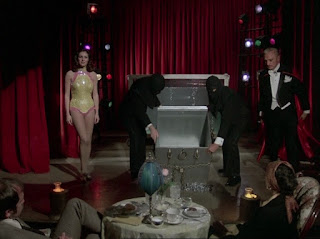 Last Salute to the Commodore wraps up the fifth season. Commodore Otis Swanson (John Dehner) owns a boat yard. A very big boat yard. He is a celebrated yacht designer and his business is worth a very great deal of money. His son-in-law Charlie Clay (Robert Vaughn) takes care of the day-to-day running of the business but increasingly the Commodore and Charlie have not been seeing eye to eye. Charlie may be on the way out. In fact the Commodore has had just about enough of his whole family, including his permanently drunk daughter Joanna (married to Charlie Clay). The Commodore seems to have been contemplating some major changes that would have been rather disagreeable to almost everyone.

It’s not a great surprise that the Commodore meets with an accident. It’s one of those accidents that you can kind of see coming.

Both Columbo and the audience learn quite a few things about yachts in this episode. Things like self-steering vanes and gybing. Gybing was probably the cause of the tragic accident that cost the Commodore his life. Assuming of course that it was an accident, and Lieutenant Columbo assumes no such thing.

Patrick McGoohan directed this episode and it’s definitely an attempt to do something different with the established Columbo formula. It’s stylistically different, with some eccentric framing and some offbeat pacing and some odd acting performances. There’s a subtle difference in the tone - a bit more edgy and a bit more histrionic.

This is also a departure from the usual formula in that Columbo is given a sidekick. In fact he’s given two sidekicks! A sergeant plus a young up-and-coming detective who is imposed on Columbo by someone very senior in the department. 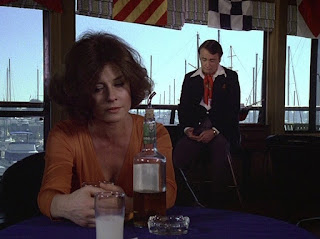 There’s also a great deal of humour. Some of the humour works very well, some doesn’t.

The differences are not just stylistic although I can’t say anything more than that.

This is a rather controversial episode that is strongly disliked by most Columbo fans. In fact it’s strongly disliked by almost everyone. The script was written by Jackson Gillis but I’m inclined to think that the episode’s peculiarities were mostly the work of Patrick McGoohan. It really does have McGoohan’s fingerprints all over it. This is the McGoohan who was responsible for The Prisoner and it has so many of the characteristics that distinguished The Prisoner - the same anarchic quality, the uneasy mixing of black humour and drama, the odd pacing, the very experimental feel, the touches of self-conscious artiness, the hints of the surreal (very strange in a Columbo episode), the wilful and deliberate eccentricity, the staginess, the bizarre acting performances.

It’s a risky approach and you can’t help expecting that at any moment it’s going to crash and burn. And that’s exactly what happens. It really is very much like the less successful episodes of The Prisoner, especially the disastrous later episodes of that series. It’s a slow-moving trainwreck but it’s a fascinating trainwreck. It’s not all bad. It’s a mixture of very bad ideas and very good ideas. McGoohan was a genius but he was a very flawed genius. It has to be said that he never lacked the courage to push things to an extreme. Having decided to do a very different kind of Columbo episode he can’t be accused of half-measures.

The fifth season really did have some strange moments. Some superb episodes and quite a few that were intriguingly offbeat. There was obviously a feeling that steps needed to be taken to keep things fresh. It’s an uneven season but overall it’s surprisingly strong. Highly recommended.
Posted by dfordoom at 08:15