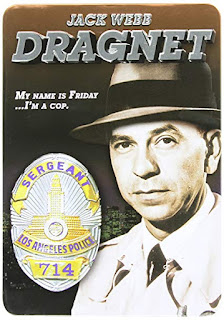 Dragnet was one of the all-time classic American TV cop shows. It started as a radio show then switched to television in 1951 and ran on the NBC network until 1959. Despite its legendary status mention of Dragnet will often be greeted by sniggers or even sneers. This is largely because if the ill-advised and very inferior 1967 reboot. The lamentable 1967 version is more familiar and sadly a lot of people assume that its faults were also present in the original version. That simply isn’t the case.

The 1950s version also suffers from being in the public domain. There have been many DVD releases and most of them have been pretty awful. And these public domain DVDs are pretty much the only way to get to see this excellent series. To make things even worse most episodes don’t give you a title during either the opening or closing credits and the lists of episodes on the DVDs are often completely wrong.

The 1950s Dragnet was a realistic crime series that was not afraid to tackle difficult subject matter. It was not without humour. In fact it struck pretty much the perfect balance for a cop show.

The word iconic is overused but it’s the only word to describe Jack Webb’s performance as Sergeant Joe Friday. Webb also created the series and he directed every episode. On top of that he wrote a few episodes as well. Unfortunately here again we’re up against the curse of the 1967 revival, in which Webb’s performance just doesn’t work anywhere near as well. In fact it sometimes seems close to self-parody. But in the 1950s incarnation of Dragnet he’s superb. You will never see more laid-back acting, or more minimalist acting. He still manages to convince us that Friday is a hard-working dedicated cop who is by no means lacking in sensitivity. And his patience is phenomenal.

In the early days of the series Friday had several partners but by the end of the second season Ben Alexander as Officer Frank Smith has become Friday’s permanent partner. Alexander’s performance complements Webb’s perfectly. While Ben Alexander was the best of Friday’s partners it has to be said that Barney Phillips as Ed Jacobs is also pretty good, and he’s almost as laconic as Jack Webb! 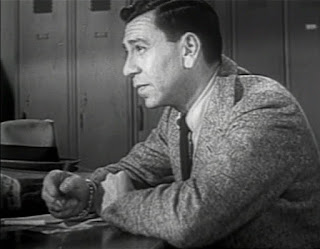 This was the 50s, when American TV series were made on tight budgets and even tighter production schedules and there wasn’t much scope for fancy visuals or location shooting. The studio-bound feel tends to work in Dragnet’s favour. Dragnet was not an action series. It was very much a series focused on routine police work. Being a successful cop generally has little to do with an officer’s prowess with firearms or ability to engage in spectacular car chases. It requires patience and thoroughness, attention to detail and an understanding of what makes people tick. Friday has these qualities and that’s what the series concentrates on.

Even today Dragnet stands out for its realistic depiction of the way crimes are actually solved. Friday does not have brilliant leaps of intuition. He follows the obvious leads and he follows them methodically until he gets a break. He doesn’t care how tedious the process is. He doesn’t care how long it takes. It’s the way it has to be done. In one hit-and-run case he and Smith find that the truck involved in the incident could have been any one of the 173 identical trucks owned by a particular bakery and as the drivers are allowed to use the trucks outside of working hours the only thing to do is to check up on all 173 trucks. Friday’s response to this is, “Well we’d better get started.“ When they interrogate a suspect the process can go on hour after hour, getting the suspect to tell his story over and over again. The genius of this series is that it makes this thoroughly routine police work absolutely fascinating.

276 episodes were made, of which around 50 are available on various DVDs. I’ve review a selection of the episodes which I happen to have on DVD.

The Big Confession seems to be a routine robbery investigation. A young man named Tom Stanford has confessed but his story doesn’t quite add up. The victim has made a positive ID but her story of the events is not consistent with Stanford’s. Joe Friday and his partner Frank Smith just aren’t happy with the case at all. 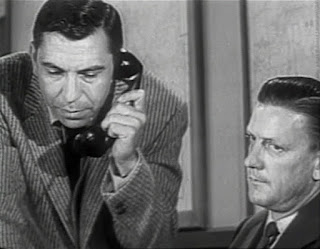 The Big Break is the tale of an armed robber who just won’t give up. He claims he can break out of any jail any time he likes, and it seems like he really can. There are some neat little plot twists in this one. A very good episode.

In The Big Frame Joe and Frank are assigned to traffic, investigating suspected hit-and-run incidents. The latest such fatality seems less than clear-cut. The skid marks on the road seem to be too old to be connected with the accident and the account given by the victim’s fiancée is not at all satisfactory.

One of the running gags in the series is that Joe is always suffering from some minor ailment and Frank always turns out to be an expert in that field and usually has his own home remedy or his own brand of medical advice to offer.

Friday and Smith get assigned to various duties which allows the series to deal with a huge variety of crimes ranging from the most serious to the most trivial. In The Big Shoplift they’re on the burglary detail and they’re investigating a string of shoplifting incidents. There are clues but they’re confusing. It’s an interesting episode as an example of changing social attitudes. Whether the social attitudes of 1954 are more or less enlightened than those of today is a moot point.

The Big Hit-Run Killer is a classic example of the Dragnet formula. An investigation of a hit-run accident drags on day after day, with promising leads frustratingly going nowhere after days of effort. When they find a promising suspect they then have to check out his alibi. That takes more days of patient leg work. This is basic routine police work but it’s also incredibly tense human drama. It might be a game requiring infinite patience but the stakes are high. Get it wrong one way and you’ve sent an innocent man to jail for years. Get it wrong the other way and a killer walks free. So you make sure you don’t get it wrong. You go everything until you’re certain. It’s an enthralling episode.

The Big Producer turns out to be an old-time movie producer who used to be a big deal in the silent movie days. Now he’s in the obscene publications business. He’s a sad defeated man who lives in the past and still dreams of resurrecting his movie career. In the world of Dragnet people sometimes commit crimes out of weakness but while Friday and Smith sometimes feel sorry for such criminals weakness isn’t an excuse. You have to take responsibility for your actions and if you commit a crime you have to pay the price. An interesting and rather poignant episode. 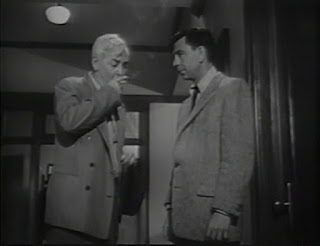 The Big Phone Call is a season one episode with Friday being partnered with Sergeant Ed Jacobs (Barney Phillips). The entire episode takes place in one room in which Friday and Jacobs are interrogating a robbery suspect. They’ve spent months accumulating overwhelming evidence but the suspect stubbornly refuses to admit anything. It’s another fine example of Dragnet taking a story that could have been deadly dull but instead it’s gripping television as the patient but remorseless interrogation continues. A very good episode.

The Big Casing is another first season episode, also with Ed Jacobs as Friday’s partner. This is a great one for anyone who loves stories that go into extreme detail on forensic science. A fine episode.

The Big Seventeen is a second season episode with Herb Ellis playing Officer Frank Smith, a rôle which soon be taken over by Ben Alexander.

The Big September Man is a murder case. The police have a body, a murder weapon and a pretty promising suspect. What they don’t have is any actual evidence to connect these three things. If there’s one thing that Sergeants Friday and Jacobs know it’s that there’s no point in sitting around waiting for a brilliant inspiration. It’s time to do some legwork.

In The Big Look a number of women have been viciously attacked in their own homes. At first there’s not much to go on but finally a victim is able to give the police a reasonable description. Friday and Smith have a suspect in custody, but is he the right man? A pretty good episode.

In The Big Crime two four-year-old girls go missing and the police have reason to fear the worst. This manages to be a fine hard-hitting episode without resorting to the gratuitous gruesomeness that would inevitably have featured in a modern version of the story. 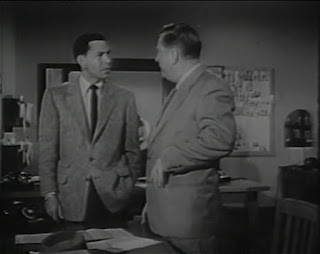 Friday and Smith are working the Bunco Division in The Big Betty and they’re after a particularly nasty gang of con-men who target the recently bereaved. Very few criminals can get under Joe Friday’s skin but this gang manages to do just that. A good episode.

The Big Little Jesus is a Christmas episode about the theft of a statue of the infant Jesus. It tries to be both heartwarming and whimsical and, oddly enough, it succeeds.

The Big TV (AKA The Big Send-Off or The Big Sound-Off) is a missing persons case. A young mother has disappeared. Her mother-in-law filed the missing persons report but it just doesn’t seem quite right to Friday and Smith.

It’s interesting to compare Dragnet to M Squad. They represent radically different approaches to the half-hour cop series. The whole idea of Dragnet is that it’s a glimpse into the working lives of ordinary cops working everyday cases. M Squad on the other is an elite police squad dealing with cases that are anything but ordinary. Dragnet’s Joe Friday is a good cop but there’s nothing extraordinary or colourful about him. He just does his job. M Squad’s Lieutenant Frank Ballinger is a very colourful larger-than-life character. Dragnet started as a radio series and it’s very dialogue-driven. M Squad takes its inspiration from film noir and it’s much more visually oriented. Two very different approaches, but they both work and Dragnet and M Squad are both outstanding examples of the 1950s American cop show.

Series like Dragnet were produced on very tight budgets and very tight production schedules. The results in many cases were series that looked cheap and shoddy. Dragnet avoids that hazard. As a director Jack Webb certainly knew how to get episodes shot as quickly and cheaply as possible but he came up with a certain style that made that approach work. He uses lots of close-ups, and lots of extreme close-ups. It gives a sense of tension and urgency to interrogation scenes. The laconic acting styles affected not just by Jack Webb (who turned laconic into an art form) but by the other actors as well gives us a sense of the wheels of justice turning slowly but inexorably. The Dragnet style could be, and often was, parodied but it undeniably worked.

It was cheap mass-produced television but Dragnet remains one of the most iconic and one of the best cop shows ever made. Very highly recommended.
Posted by dfordoom at 05:33