The Girl from U.N.C.L.E. - The Global Globules Affair (novel) 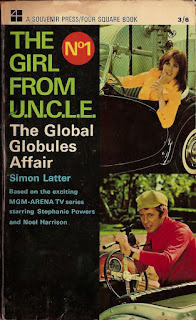 The author was Simon Latter, who was actually British writer Reginald Martin (1908-71). Martin wrote in various genres and was also reasonably successful as a children’s author.

The Global Globules Affair gets under way when secret agent April Dancer, on leave in London and wandering through Carnaby Street, notices a curious new fashion trend - metal dresses. She also runs into Dr Carl Karadin. Karadin is a mad scientist but he’s generally been presumed to be a harmless example of the breed. And then April’s fellow U.N.C.L.E. agent Mark Slate has to borrow money from her. He had two five-pound notes in his wallet but they’ve kind of disintegrated. Which causes April to remember that Dr Karadin had been something of a crank on the subject of global currency reform.

There doesn’t seem to be much connection between these odd events but April has a hunch there may be a sinister pattern here and U.N.C.L.E. chief Alexander Waverley has learnt to respect April’s hunches. April and Mark will investigate further, and they will uncover a bizarre conspiracy involving molecular globules of a chemical known as K.S.R.6, disappearing bank notes, metallic clothing, sinister street signs and dolly birds on mopeds.

It’s a story that is in keeping with the feel of the TV series. It’s outlandish but clever and witty. The TV series at times became too overtly silly and too self-consciously high camp. Both Simon Latter and Michael Avallone, who wrote the other Girl from U.N.C.L.E. tie-in novel I reviewed recently, have (wisely) tried to keep the silliness and the camp elements within strict limits. They’ve also added just a very slightly darker edge. On the whole I think The Global Globules Affair feels like it could have been one of the better and less silly Girl from U.N.C.L.E. episodes.

Latter has done a reasonably effective job bringing April Dancer and Mark Slate to the printed page. Mark Slate is the trickier character since his personality in the TV series is largely the product of Noel Harrison’s delightfully quirky performance. On the whole though the two U.N.C.L.E. agents are fairly believable as the characters from the TV show.

In the TV series the relationship between the two characters is made quite clear. They’re friends and colleagues but they have no romantic interest in each other. That relationship is maintained in the novel.

Most crucially Latter has come up with a fairly entertaining story. There’s plenty of action, there’s reasonably amusing banter between the two lead characters, there are cool gadgets, there are fast cars and helicopters and the conspiracy is something that threatens the entire civilised world.

Latter’s prose style is perfectly adequate and he avoids the temptation to try to be too jokey.

Like most TV tie-in novels this is a fairly short novel. Like the TV series it’s based on it’s a light-hearted and enjoyable mix of science fiction and spy thriller. Recommended.
Posted by dfordoom at 16:23