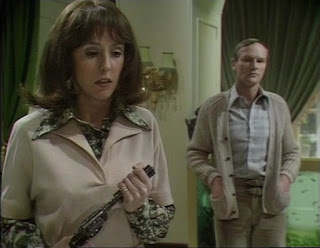 Two more episodes from the excellent British ITC anthology series Thriller, both from season five and originally aired in 1975.

Good Salary, Prospects, Free Coffin
Good Salary, Prospects, Free Coffin (retitled as Mirror of Deception in the U.S.) starts with a hole being dug, a hole that looks not unlike a grave. The scene then switches to a London flat shared by three girls, Wendy, Babs and Helen. The delivery of the newspaper has raised some excitement, It contains a job advert that sounds very tempting. It’s a well-paid live-in job in the country for a young woman with no ties and a sense of adventure.

Wendy lands the job and Babs and Helen never hear from her again. Of course that’s not all that unusual - they had only shared a flat for six months or so, and Wendy did not the other two all that well. A few months later the same job advert appears again. This time Babs gets the job. And Helen never hears from her again. This is a little surprising since Babs and Helen were reasonably close.

Another few months go by. Helen gets married to her long-time boyfriend Charley (Keith Barron). Helen is an American and so she has to go to the American Embassy to get her passport updated with her new marital status. She has quite a shock when the Embassy official dealing with passports turns out to be Babs Bryant, an amazing coincidence since Bryant was the surname of Helen’s friend Babs. And this Babs is from York too, just like the other Babs. But it’s not Babs.

The other curious incident concerned the scarf. Bans had borrowed Helen’s scarf and left it behind at the office where she was interviewed for the mystery job. When Helen turned up at the office the following day to retrieve her scarf the office was deserted, and she was informed that it had been deserted for months. A very curious employment agency. 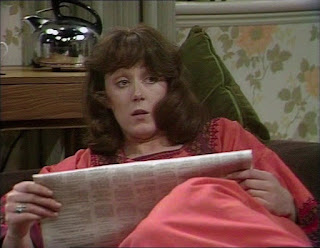 In fact Helen has no idea just how curious this employment agency is.

It doesn’t take too long to get a fairly good idea as to what’s going on. That’s not a weakness in Brian Clemens’ script - he wants us to know exactly what it is that is happening. He wants us to be very afraid indeed for the heroine when she decides to play amateur detective. He wants us to know just how much danger she is putting herself in.

And he has some twists still held in reserve.

Julian Glover is deliciously sinister as the sadistic Gifford. James Maxwell is extremely good as Carter and there’s a nice edge to the relationship between the two bad guys.

The weak link is Kim Darby as Helen. This was an ITC series which meant that it was pretty much compulsory to have at least one American star per episode (ITC boss Sir Lew Grade being totally obsessed with the wrong-headed notion that this was the secret to cracking the U.S. market). Thriller’s American imports are all very much second-string stars but mostly they do a decent job. Kim Darby however is just a bit too bland. The chemistry between Darby and Keith Barron just isn’t there also and it’s difficult to imagine why two such people would want to get married. 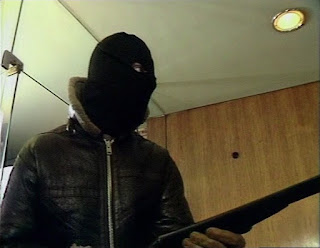 It opens with a prologue in 1964. Visiting American jazz pianist Stan Kay (Bradford Dillman) is caught in the middle of a bank raid in London. His wife is killed and he is blinded permanently by a shotgun blast.

That sounds like a lucky break for Stan, a chance he will finally get justice. The difficulty is that it was a voice heard at a very crowded party and in such circumstances it is just about impossible for a blind man to tell which of a hundred or so guests was the man with the voice.

He does have an ally. Julie (Catherine Schell) works for Stan’s agent and she is acting as a kind of personal assistant/companion to him during the British leg of his tour. She likes Stan and she believes his story. It’s still an awesomely difficult task to identify the killer. Stan knows the voice and Julie doesn’t, but Julie has eyes and Stan doesn’t. Maybe between the two of them they can do it.

The danger of course is that their snooping is going to be noticed by the killer, so that while  Stan and Julie are stalking him through the crowded party the killer could be stalking them. 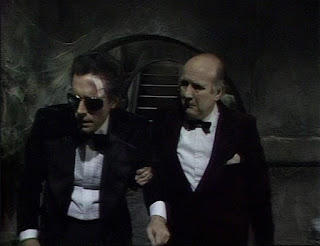 Bradford Dillman is this week’s cheap imported American star and he’s OK. He manages to be convincing as a slightly temperamental musician type and he conveys Stan’s anger and frustration pretty well.

Catherine Schell is also good as Julie. She’s a woman whose job entails being nice to people who are sometimes very difficult but she’s a sympathetic sort of person and although Stan is prickly she copes with him very well. She gets completely drawn into Stan’s obsessive quest to find the murderer.

Thriller was made on tight budgets with very little location shooting. That’s ideal for this kind of story where everything has to take place in just a few rooms and a claustrophobic feel is highly desirable. The nature of the story also means that almost every scene involves at least a dozen people - it is all taking place at a crowded party - so you need a competent and pretty experienced director to keep things under control. Robert Tronson was perfectly qualified for the job and he handles it well. He manages to make a party overflowing with guests seem like a very dangerous place.

This is another Brian Clemens story but the actual screenplay is by Terence Feely. So you’ve got a lot of very experienced and talented TV people involved and the results are more than satisfactory.

Another fairly good episode.
Posted by dfordoom at 21:41