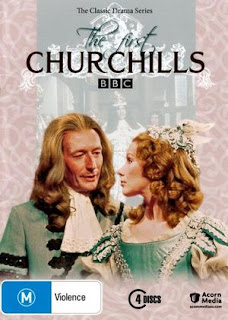 The First Churchills is a lavish 1969 BBC costume drama. These productions are I guess the television equivalent of chick flicks, although in 1969 they were generally well-written well-acted and very handsomely mounted. And they were the one thing that British TV could do that American TV couldn’t.

This one has the advantage of being set in a truly fascinating period of English history which is sadly little known and since Restoration England was also a famously debauched period of history it has the added advantage (from the BBC’s point of view) of providing plenty of titillation with a kind of artsy veneer.

It is the story of John Churchill (who eventually became the 1st Duke of Marlborough and was claimed as an ancestor of by Winston Churchill) and his wife Sarah. John Churchill rose from relative obscurity to the heights of fame as a general and the Churchills also enjoyed immense prestige and influence in the court of Queen Anne. John Churchill’s success was at least partly attributable to what might charitably be called his moral flexibility. He betrayed his king but he was lucky enough to choose the winning side and became, for a time a least, a hero.

The mini-series takes up the story in the latter part of the reign of Charles II. John Churchill is an obscure courtier and junior officer. He is as debauched as the rest of Charles II’s court. He is also quite penniless and he desperately needs a rich wife. He meets Sarah Jennings, maid of honour to the Duchess of York. Sarah is also penniless and desperately needs a rich husband. To the horror of their families they fall madly in love and marry. John Churchill is so much in love he is even prepared to give up his mistresses.

It was an incredibly turbulent period of history with a series of rebellions, both unsuccessful and successful, a series of rather futile wars and endless conspiracies. The Churchills contrived to be in the thick of it all. 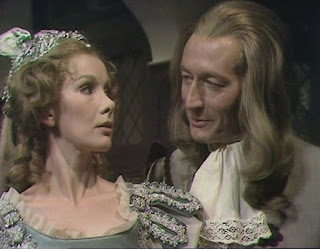 John Neville was in my view a very poor choice to play John Churchill. He was always an actor who contrived to combine woodenness with pomposity.

Susan Hampshire was not the first choice to play Sarah and it was apparently made clear to her by other members of the cast that they did not consider her to be good enough to play the rôle. In fact she does very well in a difficult and challenging rôle, giving a characteristically spirited performance. In contrast to John Neville, who seems to be merely declaiming speeches, she brings Sarah to life.

The other acting highlight is the criminally underrated James Villiers’ deliciously overripe performance as Charles II. In fact Villiers is by far the best thing about this series.

This is a mini-series that does definitely assume that you have a basic knowledge of the religious and constitutional crises of late 17th century English history. If you’re not familiar with the period you’d be well advised to read up on it a bit before watching the series.

The series tries to be reasonably even-handed, which isn’t easy. This is a period of English history that still generates a surprising amount of angst and ill feeling. It’s amazing how many people have an axe to grind when it comes to subjects like the Glorious Revolution and Monmouth’s Rebellion. 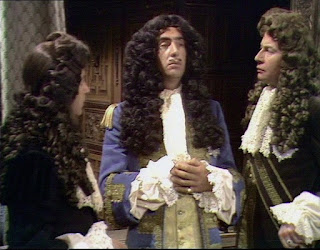 Charles II comes across very sympathetically, which is fairly natural. He was dealt a very bad hand by fate but played it with immense skill and it’s hard not to feel a certain admiration for him. James II is more controversial and more difficult but the series does at least take his religious motivations seriously and does portray him as a complex man with the wrong personality to be a successful king at that time. John Westbrook’s performance might seem superficially dull but it’s probably accurate - James seems to have been a man who took things very very seriously and lacked the ability to make people like him.The Prince of Orange, later William III, is interestingly enough portrayed as a rather nasty and very untrustworthy little creep.

To be honest the only entirely sympathetic character here is Charles II, and perhaps to a lesser extent Marlborough’s close friend Sidney Godolphin, a politician with at least some principles. The unsympathetic portrayals of the other characters are probably quite realistic. These were people who played the game of power. You don’t win at that game by being a nice guy (or a nice lady). You win by putting ambition first and destroying anyone who gets in your way.

One of the main themes of the series is Sarah Churchill’s friendship with Princess (later Queen) Anne. It was a friendship that gave Sarah Churchill enormous influence over Anne, and whether that was a good thing or a bad thing is a matter for historians to debate. It’s certainly a friendship that makes for good television. It’s hard enough for a friendship to bridge the gap between monarch and subject and Sarah’s legendary foul temper did not always help matters. Anne, played by Margaret Tyzack, comes across as well-meaning but not too bright.

John Churchill himself was always going to be difficult. The series gives us a slightly sanitised version of the man (in the 1960s it’s hardly likely that a British television production would have portrayed one of Winston Churchill’s ancestors unsympathetically). I’m not sure it succeeds - to me Churchill still seems ambitious and self-serving. John Neville’s performance is particularly unfortunate since rather than showing Churchill as a man facing a crisis of conscience he seems to be merely a pompous self-justifying prig. 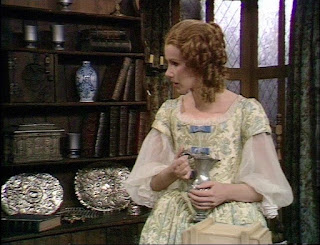 The year 1969 was an interesting era for British television. These were still the days when British television was shot more or less live on videotape, videotape being horrifically expensive to edit in those days. Shooting on film was becoming slightly more common in big-budget commercial TV productions and within a few years location shooting would become much more common. But The First Churchills, based on the testimony of Susan Hampshire, was apparently shot almost entirely on videotape.

The series was shot in colour. Production values are extremely high. The sets are lavish and the costumes are gorgeous. Given the subject matter you expect a visual extravaganza and by and large that’s what you get. Of course on a television budget it was not going to be possible to do full-scale battle scenes so the challenge was to try to capture the drama and the confusion and the terror whilst using only a handful of extras and spending virtually no money. That’s not easy to do but they succeeded reasonably well.

The First Churchills is like a combination of a superior domestic melodrama and a political thriller, with the emphasis on the melodrama. It’s the personalities that matter, and the personal relationships between them. The characters might not be loveable but they are intensely fascinating. As I said at the beginning it’s clearly a series made primarily with a female audience in mind. If you enjoy these costume dramas this one is more interesting than most and can be recommended.

The First Churchills is readily available on DVD in Regions 1, 2 and 4.