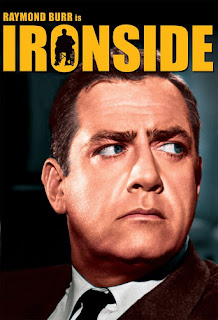 The enormous success of Perry Mason had made Raymond Burr one of the biggest stars on American television. When Perry Mason ended its nine-year run in 1966 Burr went straight into Ironside, another immensely successful series that enjoyed an eight-season run. At this time Raymond Burr truly could do no wrong.

Ironside began in 1966 as a made-for-TV movie, A Man Called Ironside. It was picked up as a series by NBC and began its run in 1967.

One thing that is obvious from the start is that Raymond Burr did not intend to play Ironside as Perry Mason in a wheelchair. They’re very different characters and Burr, very wisely, was determined to make them as different as possible. Perry Mason has a great deal of charm and affability and this is not just something he fakes in the courtroom. The charm is genuine, and the warmth is genuine as well. There’s nothing charming or warm about Robert T. Ironside. He’s abrasive and he’s rude and he rides roughshod over anyone who gets in his way. He’s not the kind of guy to whom anyone would take an instant liking. He’s the kind of man for whom you would develop a grudging respect which might, in the fullness of time, ripen into affection. Perry Mason is a lawyer. It’s his job to make a jury like him and trust him and empathise with him. Ironside is a cop. He expects people to hate him. He doesn’t care.

Of course the hero of a TV series has to be someone that audiences will empathise with but Burr is confident enough to believe that he can persuade the audience to accept Ironside as an uncompromising curmudgeon and to learn to admire the positives in his personal makeup and overlook his character flaws. In fact he was confident that they’d accept that there was real depth beneath the curmudgeonly exterior. The series was a hit so clearly Burr knew what he was doing.

This was 1967 and this was a time when American television decided it had to focus on “social issues” - almost always with cringe-inducing results. Ironside was not immune from these pressures and in the TV movie there’s plenty to cringe about. 1967 was also a time when American TV wanted to get in touch with youth culture, with results that were always excruciating. There’s a lot of that here as well. It’s not enough to wreck the TV movie but it is embarrassing.

The TV movie is crucially important as it gives us the essential backstory. San Francisco Chief of Detective Robert T. Ironside (Burr) is gunned down while on vacation. He survives but will never walk again. It marks the end of a distinguished police career. Or it would for any normal man. But not for Ironside. He can’t officially work for the department any longer and he can’t earn money without losing his pension but he persuades the Commissioner to take him on as a volunteer consultant. Persuade is perhaps the wrong word. He tells the Commissioner that this is what is going to happen and the Commissioner does what everybody does - he does exactly what Ironside tells him to do. 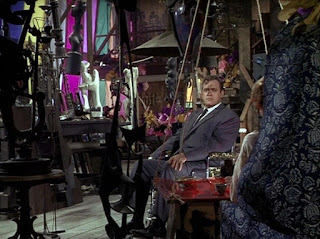 So we pretty much know by now how Ironside operates. The man is unstoppable. When he encounters an immovable object he simply crushes it. Finding himself confined to a wheelchair is no more than a petty annoyance. Ironside is a cop. It’s what he lives for. If he can’t be a cop officially he intends to go on being one unofficially. And being unofficial (or semi-official would be more accurate) will give him a lot more leeway.

Ironside has a team of assistants and they’re pretty predictable. There’s Detective-Sergeant Ed Brown (Don Galloway), a rather dull straight arrow. There’s the obligatory female cop, Officer Eve Whitfield (Barbara Anderson), who is not too irritating. And there’s the black street thug Mark Sanger (Don Mitchell) who has been reformed by Ironside. The interactions between these four are every bit as cliché-ridden as you’d expect. Raymond Burr is the only regular cast member who can actually act so he has to carry the whole thing himself.

The TV movie follows Ironside’s investigation into his own shooting. There’s some awful 60s arty/hippie stuff to try to distract us. The plot is OK. The art gallery climax is unusual and original. It’s very very silly, but it is unusual and original. It is at least a bold attempt to solve the problem of having an action climax with a hero confined to a wheelchair so they get points for trying. Overall I was at best moderately impressed.

Look out for an appearance by bizarre 60s icon Tiny Tim.

The first actual season one episode is Message from Beyond and it takes Ironside to the racetrack where we learn something new about him - he likes to play the ponies. His gambling fever serves the useful purpose of making him a bit more human. But there are bigger things to worry about, like the $175,000 that has just been stolen from the track. It was a clever theft by a stupid thief which gives Ironside something to ponder. 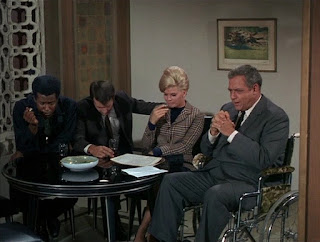 Once again we see the action climax done quite imaginatively so as to allow Ironside to be involved. A good solid episode with a clever hidden clue involving a car. Everyone knows the clue is there but no-one can find it. This is good stuff.

The Leaf in the Forest pits Ironside against the Bayside Strangler. Six murders, all following an apparently identical pattern. So why is Ironside extremely interested in one of these murders and much less interested in the others? This episode has a reasonably solid plot and works pretty well.

Dead Man's Tale is a gangster story. The number two man in a major organised crime organisation has been trying to contact Ironside, to make a deal. He has a pretty fair idea that there’s a contract out on him. One way or another Ironside intends to use him to get to the number one man, John Trask (Jack Lord). It’s a battle of wits and wills between Ironside and Trask which works very well (and Jack Lord provides Ironside with a convincingly formidable opponent). This episode is a good one.

In Eat, Drink and Be Buried it seems that someone is out to get rich successful advice columnist Francesca Kirby. The problem is, as one of Ironside’s team puts it, almost everybody would like to kill Francesca but none of them can afford to do so. A pretty nifty mystery plot here. Very entertaining.

I’m inordinately fond of mysteries that hinge on the breaking of an unbreakable alibi and The Taker includes a fine example. Ironside investigates the murder of a cop who was one of his protégés. There are two investigations that the dead cop had been involved in that catch Ironside’s attention as providing possible motives. A good old-fashioned puzzle-plot mystery.

In An Inside Job Ironside and Eve are held as hostages by escaped prisoners in Police Headquarters. Ironside has to help the prisoners to escape or they’ll shoot Eve. This one falls a bit flat. This is possibly because the odds are too clearly stacked against the prisoners. 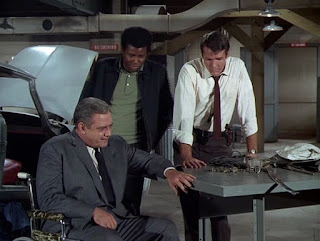 Tagged for Murder is quite a neat little story. A man is accidentally electrocuted but that isn’t possible. He was an electronics specialist in the Army during the war. And his dog tags, which he always wore around his neck, are missing. The main clue is a list of numbers, serial numbers of six American soldiers. Three of whom are now dead, which is odd. Something links these men together and Ironside has to find that link. Look out for Bruce Lee is a guest staring appearance.

Let My Brother Go is an episode that tries to be socially aware and it illustrates all too neatly why such attempts invariably backfire. Ironside wants to get young black gang members off the streets so he gets football hero Bat Masterson to give them some coaching. Meanwhile Bat’s brother Joe is out on parole and getting himself into deep trouble. It’s excruciatingly earnest and it’s heart is in the right place but it ends up being embarrassingly contrived.

The series gets back to proper crime stories and back on track with Light at the End of the Journey. This is the blind witness idea that has been used in various movies and TV shows  over the years. The only witness to a murder is a blind girl and of course being blind she didn’t actually see anything so she isn’t really a witness but the killer doesn’t know that, and Ironside wants to use a bluff to smoke out the gunman. It might not be original but it’s well executed and it works.

The Monster of Comus Towers is a heist story and a pretty good one. A very very valuable medieval religious painting is stolen. It’s more or less an impossible crime story. It’s hard to see how the thief could haver gained entry, and quite impossible to see how he could have left with the painting, considering that it’s not a canvas but a large wooden panel.

The Man Who Believed unfortunately takes us back to Youth Culture. An irritating junkie girl singer-songwriter kills herself by jumping off the Golden Gate Bridge only Chief Ironside knows it’s not suicide because the singer wrote him a letter after he was shot. He doesn’t think the girl who wrote that letter would have killed herself. Everyone think he’s crazy but Ironside is adamant. He eventually finds what could be definite proof but it turns out to be useless. Or maybe not so useless?  Ironside is after all a cunning old curmudgeon and he can find a way to use even useless evidence. A fairly clever story. 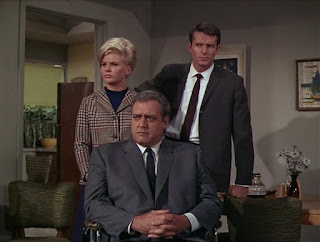 A Very Cool Hot Car deals with a clever car theft scam but again we’re back to Youth Culture and Socially Aware television. An OK episode.

In The Past Is Prologue Ironside has to try to save a friend from a 19-year-old murder rap. He starts digging into the records of the case and what he finds disturbs him. It looked like an open-and-shut case so everybody involved from the police to the defence attorney assumed that was what it was and didn’t exert themselves too much. Ironside is not convinced that the case was quite so clear-cut. He also doesn’t like it when people get lazy and take their jobs casually, especially when it’s a capital case and a man’s life is at take. So now he’s really riled up and he isn’t going to stop until he’s absolutely satisfied that justice has been done. A good episode.

Girl in the Night is quite ambitious. It has a bit of a 1940s hardboiled private eye movie vibe with perhaps just a hint of film noir. Ed Brown goes to Las Vegas to bring back an extradited hoodlum and he meets this girl (played by Susan Saint James, looking as cute as a button). Then he gets knocked on the head by two guys. It sounds like he’s been set up by the girl but he won’t believe this. This girl is different. She’s special. And she’s in trouble. He has no evidence for any of this, but he just knows it. He has in fact stumbled upon something very nasty and eventually Ironside is convinced that he’s right. This is fairly dark stuff with some nasty bad guys and some sadly broken people. A very good episode.

The DVD release (in Australia anyway) is a half-season set, a deplorable practice. This first set contains the original TV movie and the first fourteen episodes of season one. There are no extras. Image and sound quality are fine.