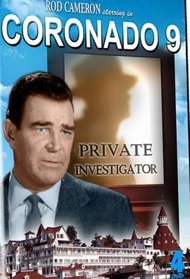 Coronado 9 is a now entirely forgotten American private eye series that aired in syndication from 1960 to 1961. Thirty-nine episodes were made in total.

Rod Cameron plays PI Dan Adams. Initially we’re not told very much about him but over the course of the first ten episodes or so we can piece together the vague outlines of his story. He’s an ex-Naval Intelligence officer, unmarried and apparently never has been married, and his greatest passion in life is his sailing boat. This offers the opportunity to introduce some vaguely nautical storylines which gives the series a bit more colour.

Rod Cameron was a big hulking guy who was pretty much born to play tough guys and cops. And private eyes. He’s reasonably convincing but he is just a little lacking when it comes to personality. Which I suspect is the reason the series only lasted one season. He certainly doesn’t have the charisma of the stars of other private eye series of that era, like Darren McGavin in Mickey Spillane’s Mike Hammer or John Cassavetes in Johnny Staccato.

Dan Adams is also very much a straight arrow, perhaps to an excessive degree. He believes in keeping nothing from the police and he definitely does not believe in cutting legal corners. That’s no doubt a sensible philosophy for a real-life private detective but you expect a TV detective to be prepared on occasions to sail a bit closer to the wind in protecting the interests of his clients.

Dan Adams also seems to be quite uninterested in any romantic entanglements with women, another factor that possibly contributed to the show’s cancellation.

The setting is San Diego. Dan Adams actually lives on Coronado Island, in a rather cool modernist beach house.

Much of this series was directed by William Witney who a couple of decades earlier had been probably the finest ever director of movie serials. As a director of serials he had been known for his skill at shooting action scenes and he gets a few chances to demonstrate that skill in his work on Coronado 9. 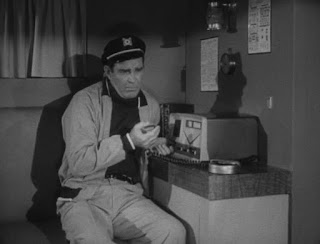 Private eye series proliferated in American TV in the late 50s and the biggest problem facing the producers of such a series was to give your production some touch of individuality or originality. You could do that by having a slightly offbeat detective (such as Johnny Staccato) or you could try putting your PI in an exotic setting (Hawaiian Eye being an example). Giving Dan Adams a sailing boat and having a few episodes with some connection to boats was a kind of token attempt to give Coronado 9 a mildly exotic flavour but unfortunately apart from the opening episode the budgets weren’t sufficient to allow actual shipboard settings.

So it’s not that it’s a bad series. It just didn’t have anything much to make it stand out.

This covers the dozen or so episodes I’ve watched.

In the opening episode, The Widow of Kill Cove, a woman hires Dan Adams to take her to Mexico to look for her missing husband. Adams finds he’s been set up and it’s a tense battle for survival on his boat. A pretty good way to kick off a series although it actually tells us nothing at all about Dan Adams except that he owns a boat and he’s a guy who can handle himself in a fight. He could be a PI or he could just be an ex-military guy.

Stroll in the Park clarifies the situation. He is definitely a PI. He’s been hired by a guy who was mugged while enjoying a romantic idyll in the park with a young lady. He’s a married man but the young lady in question was definitely not his wife, so of course he didn’t report the matter to the police. His big problem is that the muggers stole some papers and if he doesn’t get them back he’ll lose his job, so he’s relying on Dan to do so discreetly. Being discreet becomes more difficult when Dan discovers that he’s dealing with much more than a mugging. A good solid episode. 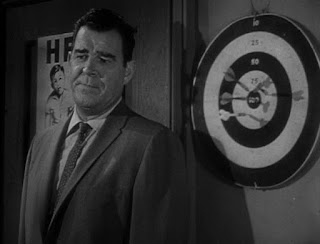 Doomtown is one of the countless TV and movie stories in which a city person travels to a nice little country town only to discover that all country people are evil knuckle-dragging rednecks and all country lawmen are corrupt thugs. This is a particularly tedious example of a tedious species. My advice is to skip this embarrassingly bad episode.

The Spinster of Nob Hill is an OK was it suicide or was it murder story. The police certainly think the dead woman’s husband murdered her and Dan has to find out the truth.

The Groom Came D.O.A. starts with a drive-by shooting, at a wedding. Dan has a kind of indirect connection with the groom and he agrees to look into the case. There are some nice little plot twists here and it’s a pretty effective story.

The Day Chivalry Died puts Dan in an awkward position. He runs into Joe Cardoza, an old Navy buddy,  at a party. Joe has to return to his ship (he’s now in the Coast Guard) and he asks Dan to keep an eye on his wife. Dan keeps an eye on her and what he sees is very disturbing. But is it what it appears to be? And how will the notoriously hot-headed Joe react? Dan needs the skills not of a private detective but of a marriage counsellor, a diplomat and a psychologist. And some all-in wrestling skills will come in handy too. A slightly offbeat episode and a good one.

I Came for the Funeral takes Dan to Mexico, to attend the funeral of the son of an old friend. Dan wants to find out exactly what happened to the deceased young man. It seems that whatever the circumstances everyone is overjoyed that the guy is dead. Including the Mexican police, represented by the vain, arrogant, foolish local police lieutenant. Or at least he likes people to think he is vain, arrogant and foolish. A good episode.

I Want to Be Hated is a serious misfire. Dan meets a woman on the ferry. Nancy is obviously crazy. And it’s not just your regular kind of craziness. This is bad craziness. The craziness that ends with someone in the morgue. But Dan decides to rescue her. Now I may be wrong but I’m not at all convinced that a hardbitten PI like Dan Adams would be dumb enough to try a thing like that. But he does. And it all becomes rather contrived. And it left me totally unconvinced. 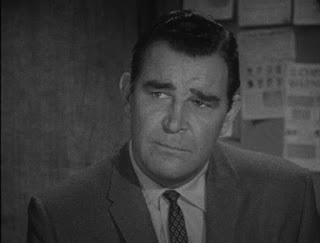 Four and Twenty Buddhas is more of a straightforward private eye tale and it’s pretty good. A young Chinese girl is conned out of some valuable art treasures but Dan Adams is on the case and pretty soon he has a personal reason to nail these hoodlums. Good episode.

In Run Scared a guy who’s just come out of prison is threatening to kill Dan, for sending him to prison in the first place. Everyone assures Dan that Harry Matthews is really serious about his threat. Which is odd, because Harry has never seemed the type for vengeance. Another very competent episode.

Alibi Bye a stereotypical over-privileged spoilt rich young man kills a woman in a hit-run accident. His rich mother wants to hire Dan to prove her son’s very dubious alibi but Dan has a really bad feeling about this case.

In A Bookie Is Not a Bibliophile gambling leads to murder, although in this case in a rather indirect manner. And it may lead to more direct forms of murder as well. A solid enough episode.

Careless Joe is a musician and he’s a nice guy but he’s too fond of women and much too fond of the ponies. Now he’s in real big trouble and wants Dan to bail him out.

Remember the Alamo presents Dan with a kidnapping case but there’s that doesn’t feel right. We know that there are several possible twists in this kind of story and Remember the Alamo does a fairly good job of keeping us uncertain as to which twist it’s going to pull. It also makes great use of the wonderful Hotel del Coronado with a fine action climax. An excellent episode.

Blow, Gabriella is a spy story about two brothers. Both are young scientists. One is a scientific genius, the other is - well let’s just say he isn’t a scientific genius. This leads to some tensions, and these tensions cause one brother to get mixed up in an espionage plot. A slightly odd episode. I wish I could assure you it’s odd in a good way, but it isn’t really. 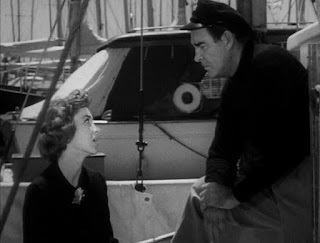 Loser's Circle is a murder case, but it’s a murder in the distant past. Except the past doesn’t always stay in the past. The mystery in this story is not too difficult to figure out.

Obituary of a Small Ape is an enjoyable spy thriller story. The small ape in question is actually a monkey and he’s the key to an espionage plot. Despite the title you’ll be pleased to know that at the end of the story the monkey is still alive and well and happy. Which is not a spoiler. The monkey is the key but whether he’s alive or dead makes no difference to the plot.

In Film Flam Dan travels to Paris and then to Algiers (through the magic of stock footage) to help out a Frenchwoman who is being blackmailed. Dan has to convince the blackmailers that he’s as crooked as they are. Not a bad episode.

Londonderry Heiress takes Dan to London, for a job as bodyguard to the daughter of a retired Irish-American gangster. Someone has been making threats against the daughter. Keeping her safe is a challenge; fending off her amorous advances is an even bigger challenge. An OK episode.

Run, Shep, Run takes Dan to an old mansion in the bayou country for a week’s duck shooting. There turns out to be shooting but it’s not the ducks being hunted. The bayou setting is effective, the plot has some decent twists and it’s reasonably exciting. All in all a good episode.

The Daley Double benefits from its setting, a movie studio where star Belinda Daley’s latest picture is being shot. Miss Daley thinks someone is trying to kill her and the recent death of her stunt double in an accident heightens her fears. So she calls in Dan Adams. The problem is that Belinda Daley has an awful lot of enemies. This one has some decent action scenes and it’s not bad.

Coronado 9 is an average sort of American private eye series for its era. If you like private eye series and you like American TV of that era it’s a harmless enough time-waster. Just don’t expect it to be in the same league as Mickey Spillane’s Mike Hammer or Johnny Staccato.

Timeless Media Group have released all 39 episodes of Coronado 9 in a four-DVD set. The transfers are reasonably good.

I’m a big fan of American TV of this era and of private eye series and I quite enjoyed Coronado 9. I think it’s worth a look if you can find it as a rental.
Posted by dfordoom at 00:35