The Man from U.N.C.L.E. - The Moonglow Affair 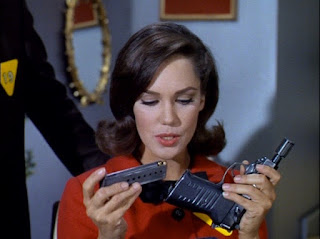 When the television series The Man from U.N.C.L.E. was being developed by Ian Fleming (yes, that Ian Fleming) the intention was to have two regular characters, a male spy (whom Fleming named Napoleon Solo) and his female partner, April Dancer.

So April Dancer, The Girl From U.N.C.L.E., can in fact be considered to have been created by Ian Fleming (which is why she has a cool name - all Fleming’s female characters had delightful names).

For various reasons Fleming severed his relationship with the series (one story is that he thought the series would be too Bond-like so he would in effect be competing with himself).

After Fleming’s departure it was decided there would be only one central character, Napoleon Solo. That’s why the series was called The Man from U.N.C.L.E. rather than The Men from U.N.C.L.E. and the pilot episode, called Solo, does indeed feature only Napoleon Solo. When the series went into production the first episode featured a minor character named Illya Kuryakin. He was so popular that the immediate decision was made to make him the co-star.

Miss Dancer had however not been entirely forgotten. A spin-off series, to be called The Girl From U.N.C.L.E., seemed like a tempting idea and episode twenty-three of the second season became in effect the pilot episode of The Girl From U.N.C.L.E.. This episode was The Moonglow Affair. It was scripted by Dean Hargrove and directed by Joseph Sargent and originally went to air in February 1966. 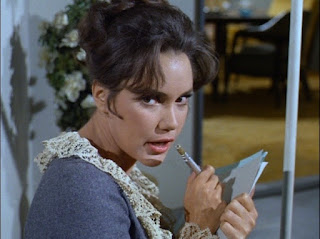 In this episode April Dancer is played by Mary Ann Mobley with her partner Mark Slate being played by Norman Fell. When The Girl from U.N.C.L.E. got the go-ahead as a spin-off series Stefanie Powers took over the role of Miss Dancer while Mark Slate became very English and was played by Noel Harrison.

By this stage the fatal decision had been made to turn both The Man from U.N.C.L.E. and The Girl From U.N.C.L.E. into zany comic-book style adventures inspired by the Batman TV series. This ill-considered decision doomed both series. It just didn’t work. They already had the right formula, an American copy of the mixture of action and tongue-in-cheek charm that worked so well for the Bond movies, and changing that formula was an idea that only 1960s TV network executives could have come up with.

The Moonglow Affair is still in the early Man from U.N.C.L.E. style, sophisticated sand witty rather than zany and goofy.

In some ways April Dancer resembles Cinnamon Carter in Mission: Impossible, relying on her wits and her sex appeal rather than her fighting skills. She is slightly more of an action heroine than Cinnamon Carter, but she is not really a Cath Gale or an Emma Peel-style full-blown kickass action heroine.

In The Moonglow Affair both Napoleon Solo and Ilya Kuryakin have landed themselves in very bad trouble and in desperation Mr Waverley has to send a brand new agent into the field to rescue them. April Dancer is only twenty-four but Mr Waverley assures doubters that she really is fully trained and very capable. 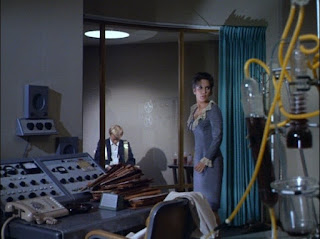 April’s partner Mark Slate is balding middle-aged Norman Fell. In fact he’s past retirement age for a field agent which becomes a running joke through the rest of the episode.

THRUSH is trying to sabotage the American space program, and the Russian space program as well. THRUSH has its own plans for space exploration. They’re using a cosmetics company as a front and April manages to get herself chosen as Miss Moonglow, the centrepiece of their promotional plans for a new glow-in-the-dark lipstick (and that glow-in-the-dark lipstick will be used quite cleverly at the episode’s climax).

The Moonglow Affair was broadcast in February 1966. The idea of The Girl from U.N.C.L.E. series was obviously already in the air (it would make its debut in September 1966). I have no idea if Mary Ann Mobley was considered for the role in the series. She’s quite good but perhaps she didn’t quite have the star power for a series. Or perhaps the decision to put more emphasis on zany comedy made Stefanie Powers seem like a more suitable choice.

While Norman Fell was fun as the middle-aged Mark Slate that casting was obviously only going to work as a one-off.

The Moonglow Affair certainly puts April Dancer at centre stage. Napoleon Solo and Ilya Kuryakin scarcely appear in this episode at all. The idea presumably was to find out if April Dancer was likely to be a strong enough character to carry a series. 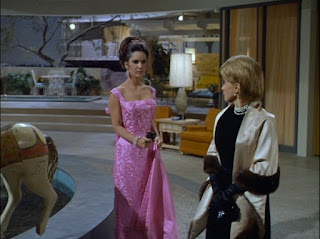 The potential of the character was obvious. The producers however clearly thought that Mary Ann Mobley was not the right actress for the upcoming series.

I like Mary Ann Mobley in this episode. I like her a lot. She’s adorable and her acting is fine, and she captures the character very well. She can be amusing, she can be sexy. She’s not called upon to do anything physical since April Dancer was not conceived of as the kind of lady spy who relies on her unarmed combat abilities. She was, incidentally, Miss America 1959. She had some bad luck as an actress, having originally landed the part of Batgirl in the Batman TV series only to be replaced by Yvonne Craig. In a way I can see why Stefanie Powers was ultimately preferred. Mary Ann Mobley is perhaps just a bit too soft and feminine.

When it came to The Girl from U.N.C.L.E. series the producers obviously wanted April’s male partner to be more of an action hero type so Norman Fell was not likely to have been seriously considered. It’s a pity. He and Mary Ann Mobley have fine chemistry and this original version of the April Dancer-Mark Slate pairing is rather delightful.

The Moonglow Affair is actually vastly superior to most of the episodes of The Girl from U.N.C.L.E. which far too often suffered from weak writing and excessive silliness. The Moonglow Affair by contrast hits just the right balance, being witty and clever and outrageous without ever descending into self-conscious goofiness or self-parody. An entire series pairing Mary Ann Mobley and Norman Fell would most likely have had more of the feel of The Avengers rather than trying unsuccessfully to ape Batman.

The Moonglow Affair is an excellent episode. A tantalising glimpse into what might have been.
Posted by dfordoom at 09:49