Thriller, The Return of Andrew Bentley (1961) 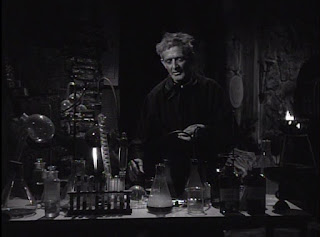 The Return of Andrew Bentley was episode twelve of the second season of the classic TV horror anthology series Thriller (hosted by Boris Karloff) . It originally went to air in December 1961. It was scripted by Richard Matheson from a story written by August Derleth and Mark Schorer and directed by John Newland (who also stars). With personnel like that involved my expectations were very high indeed.

When it comes to movie and television horror (and science fiction) very few people have résumés that can match that of Richard Matheson. He wrote most of the best episodes of the Twilight Zone. He adapted his own novel for the superb 1973 haunted house movie The Legend of Hell House. He adapted his own novel for the equally good 1957 science fiction movie The Incredible Shrinking Man. He wrote the screenplay for The Night of the Eagle (one of the best witchcraft movies ever made) and for Roger Corman’s excellent Poe movie The Pit and the Pendulum. And of course he wrote the screenplay for Hammer's best-ever movie, The Devil Rides Out.

As an editor and publisher August Derleth is usually credited with having turned H.P. Lovecraft into a major cult figure. Derleth was a fine horror writer in his own right.

John Newland is best remembered as the host of the supernatural/paranormal anthology series One Step Beyond. 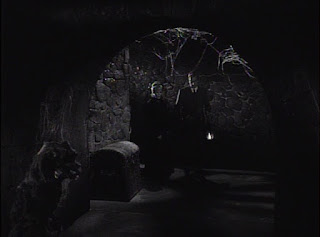 The time period in which The Return of Andrew Bentley isn’t stated but judging by the women’s dresses and the fact the protagonists arrive on the scene in a carriage would suggest the late 19th century.

Ellis Corbett (John Newland) and his wife Sheilas (Antoinette Bower) have been summoned to the decaying gothic mansion of Ellis’s uncle Amos Wilder. Amos appears to be quite mad. He tells them he is about to die and that he is leaving the house and his considerable fortune to Ellis, on certain conditions. They must live in the house and every day they must check Amos’s burial vault, looking out for anything that might indicate that the vault has been tampered with.

It seems that Amos had been a practitioner of black magic, along with a fellow named Andrew Bentley. They had a falling out. Amos thought Andrew had gone too far. Now Amos believes that Andrew is out to get him. Andrew Bentley is dead but that doesn’t make him any less dangerous. And there’s always Andrew’s familiar to worry about.

Ellis and Sheila are plenty scared but there are two reasons they can’t just flee. The first is that they would then lose the inheritance, and they really need Uncle Amos’s money. The second reason is more honourable. Ellis made a promise to his uncle. So his motivations are both selfish and selfless which makes him more interesting than most such characters.

Initially we wonder just how much Ellis knows, or perhaps more to the point just how much he believes. Then he has a terrifying encounter in the crypt. Any scepticism he may have had soon vanishes, and Sheila sees something as well. 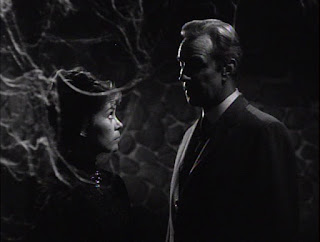 The episode then becomes full-blooded supernatural horror. This is not one of those stories in which the audience is left to wonder just how much of what they’ve seen might have a rational explanation. No rational explanations are possible. Ellis and Sheila are confronted with incontrovertible evidence. And the story is then played out dead straight. There is of course a way to defeat the evil, if you have the necessary knowledge of the occult.

There’s nothing tongue-in-cheek here, no jokiness and no attempt to be ironic or camp. Thriller had started life as an Alfred Hitchcock Presents-style mystery thriller series but by this time they’d realised that the series had to find its own identity as an unapologetic supernatural horror series.

John Newland does a solid job as director. He knows how to deliver the necessary scares.

He does a capable job as an actor as well. The whole cast is good, with Reggie Nalder very creepy as the ghost.

The Return of Andrew Bentley is fine supernatural horror, going all out for spookiness and scares. Great stuff. Highly recommended.