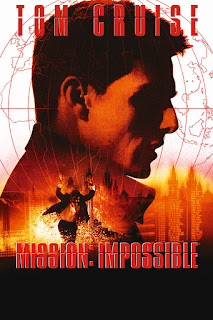 Movies based on popular 1960s TV series are usually pretty dire but the 1996 Mission: Impossible movies is an interesting exception.

At this stage of his career Tom Cruise had reached the very reasonable conclusion that the best way to ensure that he got rôles that appealed to him was to produce the movies himself. As a kid he’d been a huge fan of the 1960s Mission: Impossible TV series and making a movie version sounded like a tempting idea. The fact that Cruise was a sincere and enthusiastic fan of the TV series is significant. He didn’t want to do a deconstruction of the TV series or a parody. He wanted to make a movie capturing as much of the spirit of the TV version as possible.

This was actually quite a challenge because Mission: Impossible was a very unusual TV series. Bruce Geller, the creator and executive producer of the TV series, not only had some highly idiosyncratic ideas as to the form it would take he actually managed to persuade the production company and the network to allow him to do it his way. His first and most notable idea was that the characters would have no personality whatsoever. The focus would be entirely on plot. And, after all, spies don’t have personalities - their whole lives and their very survival are based on being able to pretend to be something other than what they are. By the time you get to the end of the 171 episodes of the series you know no more about any of the characters than you knew at the beginning. You know pretty much nothing important about their backgrounds and absolutely zero about their personal lives. Does Barney have kids? Is Cinnamon married? Does Mr Phelps play golf on the weekends? Was Willy in the army? We have no idea. Having characters with zero personality was going to be tricky for a 1990s feature film.

The TV series also has no humour at all. Humour might have humanised the characters, which was not what Geller wanted. That was also going to be tricky for the movie version.

The series also had a very distinctive structure. These were very specialised spies. They conducted not just covert operations but what would later be known as black ops, totally illegal. Almost every mission was an elaborate con game, a tortuous exercise in deception and misdirection. The Impossible Mission Force did not shoot people but it did very often manoeuvre them into a position where their own side would shoot them. Any attempt to transfer the series to the big screen would have to at least partially incorporate this idea.

The movie nails its colours to the mast right at the start. We get a pre-credits scene that is classic Mission: Impossible deception stuff and then we get the opening credits, done very much in Mission: Impossible style. And we get the theme music, and yes it’s Lalo Schifrin’s original theme music for the TV series. After which we get Mr Phelps (yes, Mr Phelps) receiving his instructions complete with the “this tape will self-destruct in five seconds” thing. He chooses his IMF team and explains his plan. 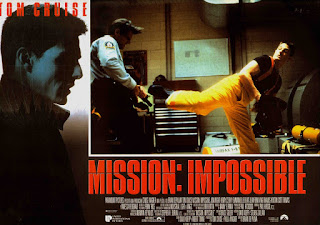 The key member of the team is Ethan Hunt (Tom Cruise) and he’s rather in the same mould as Rollin Hand from the TV series although considerably more athletic. He is a master of disguise (just like Rollin) and he even does magic tricks (just like Rollin). There’s also hacker Jack Harmon who performs pretty much the same function as Barney in the TV series. He even has to climb up inside an elevator shaft, just as Barney did in at least one TV series episode. Instead of Cinnamon Carter the team includes three glamorous females.

Up to this point the movie is practically an episode of the TV series. It then departs from the original formula in some respects button entirely. The film’s most spectacular action sequence could have been taken straight from the TV series, albeit it’s done on a much more lavish scale. There is a major action set-piece at the end of the movie that is very Bond movie, but commercial realities being what they are there’s no way they could have avoided including such a sequence.

The famous lines from the TV series about the Secretary disavowing all knowledge of the IMF if they got themselves killed or captured also become painfully relevant.

It’s also interesting that despite a few Bondian moments this is definitely not a Bond movie clone. And Ethan Hunt is most definitely not a James Bond clone. In this movie he does carry a gun but it’s noteworthy that he doesn’t shoot anybody. He also doesn’t rely on his fists or martial arts skills. He does make use of his superb physical fitness and his nerves of steel but mostly he relies on out-thinking his opponents and on the classic Mission: Impossible TV series methods of deception and of setting elaborate traps. As the CIA agent tasked with catching him says at one point the difficult part of hunting someone like Hunt is that he’s so pro-active. And that describes him perfectly. He’s constantly devising plans. When you thinking you’re hunting him he’s probably actually hunting you. His mind never stops working (there’s one superb scene in which you see him talking to a key character and all the while Hunt is analysing the data available to him and fitting the pieces of the jigsaw together). As action heroes go Ethan Hunt is pretty cerebral. His methods are more like George Smiley’s than Bond’s. And the plot is the kind of classic mole-hunt that Smiley would have relished.

What’s most notable is just how closely this movie adheres to the formula and the structure of the TV series. Ethan Hunt is a more well-rounded character than any in the series but when you think about it how much do we actually learn about him? Was he ever married? Is he married now? Does he have children? Is he ex-military? How was he recruited to the IMF? What does he do on his days off? What are his tastes in music and books? The very very few facts that we learn about him are those essential to the plot. 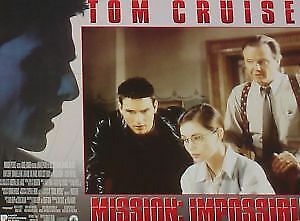 The movie’s plot is a series of complex snares relying on deception and misdirection. Some of the traps are laid by Mr Phelps, some by Hunt’s enemies and some are improvised by Hunt himself.  Any of these traps could have made a fine episode of the TV series.

The only departures from the formula are those that were unavoidable given the commercial realties of the film marketplace. Tom Cruise had to be permitted the occasional (actually very occasional) wry wisecrack. Ethan Hunt had to be marginally more human than the TV characters. There had to be more action. There had to be a Bond movie-type action finale.

There’s also no more sex than there was in the TV series, the violence isn’t graphic and there’s very little bad language.

There’s some definite Cold War atmosphere in the movie and visually there are even a few hints of film noir. And with Brian de Palma directing there are of course lots of references to other movies. In this case de Palma has fun paying homage to the classic heist movies of the ’60s, movies like Topkapi, The Thomas Crown Affair and Gambit.

To be honest I don’t think it’s possible to appreciate this movie fully unless you’re a fan of the original TV series. There are all sorts of little touches that only make sense when you recognise them as homages to the TV series. Ethan Hunt’s disguises and his magic tricks are much more fun when you know they’re nods to the series. The same applies to the gadgets (which are much closer in spirit to the original series than to the gadgets in a Bond movie). The insanely over-complicated plot is more enjoyable when you know that the series was renowned for its insanely over-complicated plots. The lack of a really strong romance angle makes more sense when you know that in the TV series romance was only ever present as a weapon used by the IMF to entrap people. I suspect that a lot of the critics who disliked the movie didn’t notice the extraordinary efforts to capture the feel and the conventions of the series.

Mission: Impossible is surprisingly successful in retaining the feel of the TV series whilst still being an exciting ’90s action movie. It’s enormously enjoyable. Highly recommended.
Posted by dfordoom at 23:08