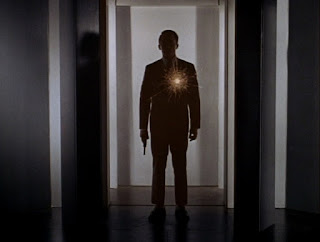 Solo is the original feature-length pilot for The Man from U.N.C.L.E., shot in colour in 1963. The head of U.N.C.L.E. is Mr Allison, played by Will Kuluva. It was later edited down to 50 minutes with some reshoots (and with Leo G. Carroll as Mr Waverley replacing Will Kuluva) and screened in black-and-white as the opening episode of the series, The Vulcan Affair.

It has a fairly straightforward spy story plot. U.N.C.L.E. has discovered that wealthy industrialist Andrew Vulcan is a THRUSH agent. Vulcan intents to assassinate the president of a new independent African nation, THRUSH having decided that having their very own country would be very useful - for one thing their agents could claim diplomatic immunity.

Solo makes use of a device that the series would use again and again - an innocent bystander gets caught up in the world of espionage. In this case it’s Elaine May Donaldson, an ordinary housewife who just happened to have been Vulcan’s girlfriend years earlier when they were both at college. U.N.C.L.E. persuades her to help them foil Vulcan’s scheme.

When it was picked up as a series by NBC it was retitled The Man from U.N.C.L.E. and you might wonder why it was not called The Men from U.N.C.L.E. The answer is obvious when you watch Solo. The focus is entirely on Napoleon Solo. Illya Kuryakin is a minor character, in fact very minor, and was intended to be at best a minor character in the series. Illya was however so immediately and insanely popular that that idea was hurriedly revised and so there ended up being two men from U.N.C.L.E. but it was too late to change the title. It was pure accident that David McCallum lasted long enough for any of this to happen since the network wanted to fire him after the pilot, another example of the reliable stupidity of network executives. 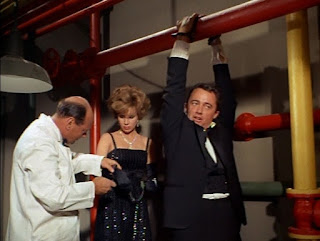 On the subject of titles it’s worth mentioning that the original working title was Ian Fleming’s Solo, later shortened to Solo. Solo was however the name of a Bond movie minor character and MGM discovered they weren’t allowed to use it as the series title but oddly (and luckily) they were still allowed to use it as a character name.

Ian Fleming had been involved in the early planing stages of the series. He had at first intended it to feature two U.N.C.L.E. agents, Napoleon Solo and glamorous girl spy April Dancer (Fleming was always amazingly good at character names). Fleming’s involvement was short-lived but the pilot episode still has a very Ian Fleming feel to it. Napoleon Solo is an American James Bond - suave, cultured, charming, educated, upper class and with a taste for the good things in life. Including women. Especially women. There’s a touch of refined arrogance and there’s supreme self-assurance.

Like Bond Napoleon Solo is a very 1950s kind of hero. He’s dapper but his suits are both well-tailored and very conservative. And like Bond he’s a touch old-fashioned even by 1950s hero standards. He could be the hero in a Hitchcock spy movie. That’s why it turned out to be very fortunate that David McCallum wasn’t fired - lllya Kuryakin is a much more 1960s hero. Even though Robert Vaughn and David McCallum were almost exactly the same age Solo and Kuryakin seem to belong to different eras. Which is why they made such a great team.

The whole thing has that characteristic Ian Fleming feel to it. This is espionage with glamour, excitement and wealth. The plot is not too outlandish. THRUSH is a totally Ian Fleming concept - it’s just SPECTRE with a different name, an international criminal organisation aiming for power and wealth but with no ideological overtones whatsoever. The villain, Andrew Vulcan, could have stepped straight out of one of the 1950s Bond novels - a smooth very upper-class megalomaniacal industrialist. 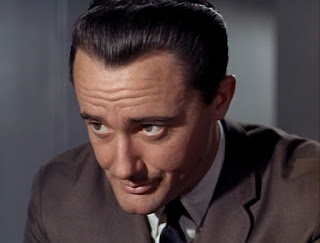 It’s very stylish and very classy. It was made by MGM Television and some of the old MGM gloss is still in evidence. It looks expensive. It probably was expensive by television standards. There’s an ambience of money and glamour. The chemical plant sets are pretty good.

Will Kuluva is quite adequate as Mr Allison but of course Leo G. Carroll proved to be a better choice for the series. The guest cast, as was the case throughout the run of the series, is very strong with Patricia Crowley playing the innocent rôle to perfection. Fritz Weaver as Vulcan is a good villain but he’s much less colourful than later Man from U.N.C.L.E. bad guys.

The first season was considerably more serious than even the second season and the pilot is more serious still. Solo is however definitely worth seeing.