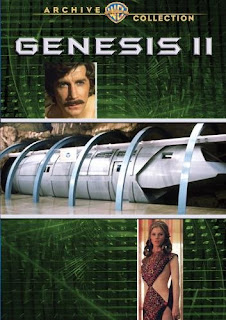 Gene Roddenberry came up with a pretty good idea when he created Star Trek. The execution of the idea was sometimes brilliant and sometimes terrible but Star Trek still deserves its legendary status among TV sci-fi series.

Naturally enough after Star Trek was canceled Roddenberry tried to come up with another great TV science fiction idea. He tried really really hard but never quite succeeded. Genesis II was one of several failed pilots for which he was responsible in the 70s. Interestingly enough he made no less than three failed pilots at the time all utilising the same basic idea.

The basic idea is in fact a direct rip-off of Buck Rogers. In 1979 scientist Dylan Hunt (Alex Cord)  is experimenting on suspended animation, with himself as the test subject. He expects to be asleep for a few days. What he doesn’t know is that the secret research facility under Carlsbad Mountain is about to be buried by an earthquake. He wakes up in the year 2133.

He is brought back to life by the beautiful Lyra-a (Mariette Hartley), who is half-human and half-Tyranian. She has two hearts which of course means that she has two navels (no I have no idea why that’s supposed to make sense either except that it’s an excuse for her to take most of her clothes off).

There had been a nuclear war many years earlier and now there are a number of competing societies. There’s PAX, apparently descended from the scientists of the 20th century and since they worship Science! they’re naturally the good guys. Then there are the Tyranians. They’re rich and evil and cruel and they keep humans as slaves. They dress like ancient Romans so we know they’re bad guys. 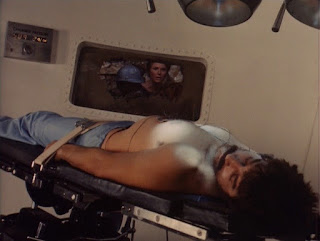 The Tyranians are apparently mutants (or at least I think they're supposed to be mutants although I must admit that I was a little bit confused on this point). Lyra-a is therefore half-human and half-mutant, a very Gene Roddenberry concept.

Some 20th century high technology still survives in the world of 2133. Nuclear power plants are still functioning, as are the ultra high speed underground railways. The trouble is that nobody now knows how the technology works so they can’t fix it if it breaks down.

The really bad news is that some nuclear warheads and some missiles still survive as well. 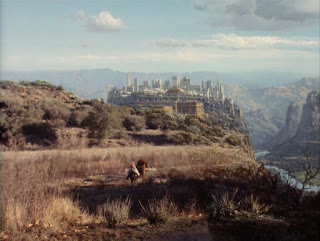 Dylan gets himself mixed up in a PAX conspiracy to start a slave revolt but he doesn’t know what to do about Lyra-a. He knows he shouldn't trust her but she’s really hot so he wants to trust her.

The major weakness is that the PAX people come across as irritating smarmy do-gooders with a passionate devotion to art, science and everything virtuous. They’re socially progressive atheists who know that science is the answer and that if we try we can all learn to get along. They’re a typical Gene Roddenberry idea of a utopia which actually strikes me as being a holier-than-thou nightmare society. 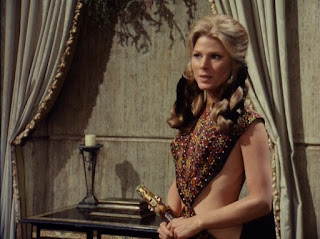 Alex Cord makes a decent enough hero but with perhaps not quite enough charisma.

Mariette Hartley is excellent. Ted Cassidy (best known as Lurch in The Addams Family) plays an Apache chief working for PAX. Which kind of works because at least it adds an offbeat touch.

The subterranean shuttles are quite cool although they’re also stolen from Buck Rogers. It’s almost as if all the good ideas here have been borrowed from elsewhere while the bad ideas are Roddenberry’s.

The costumes are as cringe-inducing as those featured in the worst episodes of Star Trek. The sets are not too bad.

It’s easy to see why network executives who saw this pilot had serious misgivings. There’s just not enough action and we have to wait a long time for any action at all. There’s too much talking. The dialogue is awful. It has too much of the feel of a Star Trek episode, but without starships and proton torpedoes and without the excitement that Star Trek provided (at least some of the time). 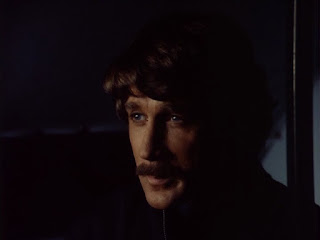 This might be giving you the impression that I hated Genesis II but I didn’t really. It does have all the faults you’d expect from Gene Roddenberry but it also has some of his strengths - and some of the strengths of Star Trek. This is a future world of many competing societies without any one dominant power so it’s a setup with plenty of potential. The idea of a world with high technology that is slowly failing because nobody knows how it works is extremely good. And it is a lot more interesting than most post-apocalyptic science fiction.

Genesis II has been released on DVD in the Warner Archive series and it looks terrific. The lack of extras is disappointing - it would have been great to get some insights into the directions a series might have taken.

Genesis II was not entirely lacking in promise and despite its flaws it’s worth a look. Star Trek had most of the same flaws but it still worked.
Posted by dfordoom at 00:16