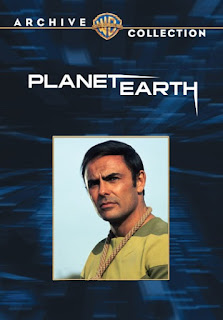 After his 1973 Genesis II pilot failed to be picked up as a series Gene Roddenberry tried again the following year with the same basic concept and surprisingly Warner Brothers Television financed another pilot. This was Planet Earth. This time the screenplay was co-written by Roddenberry and Juanita Bartlett.

Genesis II had not been entirely lacking in potential but suffered from a noticeable lack of action. Planet Earth tries to rectify this by going for a more straightforward adventure formula.

Once again we meet NASA scientist Dylan Hunt (played this time by John Saxon) a century and a half in the future after an experiment in suspended animation goes wrong. This aspect of the story was given a lot of attention in Genesis II but it’s glossed over in a few seconds of exposition in Planet Earth. Which is a pity since it makes the whole premise a bit pointless. We don’t get to see Dylan Hunt trying to making sense of this strange new world in which he finds himself.

The idea presumably is that this is a sequel to Genesis II so we already know the backstory but in fact it’s a sequel that changes things considerably. PAX is now a much more high-tech civilisation.

As in Genesis II the future Earth, having suffered a nuclear war, is home to a variety of competing societies. The most advanced is PAX. They’re the most civilised and enlightened society because they worship science and everyone knows that scientists are always right. 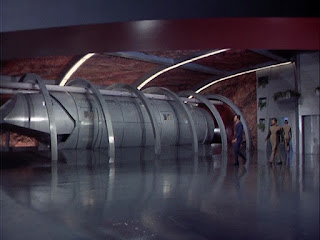 PAX regularly sends out teams to the other societies on the planet to teach them how to be properly civilised. The way to be civilised is of course to be exactly like PAX. On one of these expeditions they encounter a band of violent marauding mutants and their beloved leader is injured. He’s going to need specialised surgery but the only surgeon capable of doing the operation was captured by another barbarian society a year earlier. So Dylan Hunt and his three sidekicks set off to rescue the unfortunate surgeon from the barbarians.

The surgeon, Connor, was captured by a society of amazon women who keep men as slaves. Dylan and his team members all manage to get themselves captured and Harper-Smythe finds herself having to fight the cruel and sinister Marg (Diana Muldaur) for ownership of Dylan. All the women want to buy Dylan because he looks like good breeding stock. They all desperately want babies since babies are in very short supply. Their men are drugged to keep them docile and that seems to reduce their breeding capabilities.

What the women really need is for their men to be real men, especially with mutants running about. The women just need someone like Dylan Hunt to demonstrate how useful a man can be. 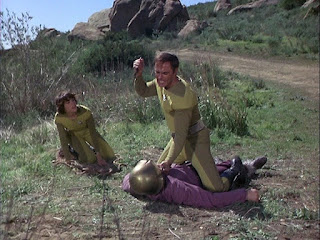 It all plays out very much like an extended episode of Star Trek. In fact it’s way too much like a Star Trek episode. And not one of the better ones. The PAX is clearly the Federation. They’re idealistic and progressive and generally virtuous. The mutant bands are the Klingons. The women’s society is the kind of alien society you see in Star Trek, even down to the costumes. The PAX people wear uniforms that look uncannily like Star Trek Federation uniforms.

John Saxon is always a very entertaining actor but he makes Dylan Hunt a bit too much of an obvious James T. Kirk clone. He may have been a safer choice than Alex Cord (who played the rôle in Genesis II) for an action adventure series but I thought Cord’s performance was the more interesting of the two simply because it was less Kirk-like.

Diana Muldaur does the best she can with the script she’s given but Marg was always going to be a rather limited character. 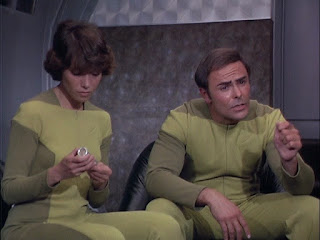 Ted Cassidy plays pretty much the same character he played in Genesis II - he’s an Apache chief but a loyal PAX foot soldier.

Planet Earth has a bit of a Planet of the Apes vibe to it - both visually and with the idea of a world turned upside down.

The subshuttles are the same as those used in Genesis II, and they’re still a good idea. If you’re going to do a science fiction series you need some cool technology and they make a nice change from starships and robots.

The decision to make PAX more or less pacifists (they only use stun guns) is more dubious - it makes them seem a bit too smug and self-righteous. 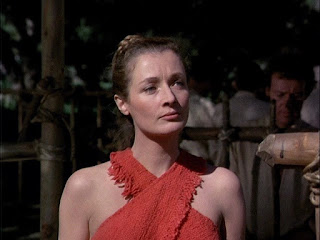 When Planet Earth failed to excite network executives Roddenberry (perhaps wisely) gave up on the whole idea. But Warner Brothers (perhaps very unwisely) decided to make a third attempt. By this time they owned the rights to the concept so without Roddenberry’s involvement they came up with yet another pilot, Strange New World. Not so strangely, it was a failure as well.

All three pilots are available on DVD in the Warner Archive series. The first two at least look great but both would have benefited enormously from an audio commentary to give them a bit more context.

I think Genesis II could have worked if only Roddenberry had gone back to it and added a few more action scenes. Planet Earth suffers from being Star Trek without the exciting stuff like starships. Both are worth a look with Genesis II being the more interesting. I haven’t seen Strange New World yet so I cannot comment on that one.
Posted by dfordoom at 11:49