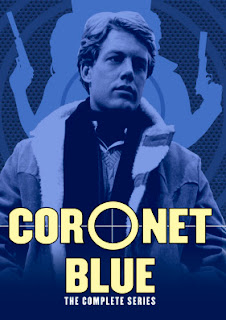 Coronet Blue is a short-lived offbeat series that aired on CBS in 1967. It was created by Larry Cohen. Cohen also created The Invaders with which Coronet Blue has some slight affinities.

A young man is mixed up in something big. It’s something dangerous and possibly illegal. Whatever it is the people behind it decide the young man has to die. Before killing him they remove all traces of identification, even the labels on his clothes. Then they dump him into the harbour. But the young man doesn’t die. He is fished out of the water, but now he doesn’t remember anything and he doesn’t know who he is or what his name is.

He is taken to the hospital where a psychiatrist tries to put him back together again but he still can’t remember anything but the words Coronet Blue. He decides he can’t stay in the hospital but before he leaves he needs a name. His psychiatrists name is Michael and the hospital is Alden General Hospital so he becomes Michael Alden.

Now he has to find out who he is. He also has to bear in mind that somebody is still trying to kill him. Neither Michael nor the audience has any idea initially as to his identity or to the part he played in whatever it was that got him dropped into the harbour. He may be a criminal. He may be an undercover cop. Or a spy. Or even an innocent bystander.

Coronet Blue is a thriller but it’s an attempt to add a few psychological and philosophical dimensions to the genre. The hero grapples with the problem of either rediscovering his identity or constructing a new life while the thriller plot bubbles away in the background, occasionally coming to the forefront suddenly and unexpectedly.

Coronet Blue belongs to an odd genre very characteristic of the 60s in which a man is both running from something and searching for something. What they are searching for varies. Sometimes it’s a meaning to the puzzle of life but often it’s the answer to a question. The Fugitive and Run for Your Life are obvious examples of this genre. The Invaders is a variation on the theme.

Coronet Blue is a series that struggles a little to find a consistent tone. It’s very 1960s in being at times quite dark and disturbing and then switching suddenly to slightly zany light comedy. There was clearly an intention to aim at a hip young audience, the sorts of viewers that the networks were desperate to reach at that time. It has that  60s “young people trying to find themselves” vibe that characterised series like Route 66 and Then Came Bronson.

Frank Converse is very good in the lead rôle. He’s sympathetic and his performance mercifully avoids wallowing in self-pity. 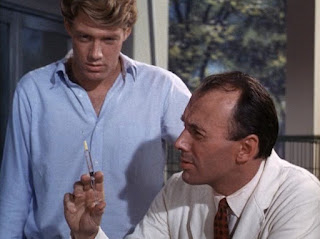 Larry Cohen lost control of the series early on and it went in a direction which was not at all what he’d intended. He saw the series as a suspense thriller story but it became a “finding yourself” series. Cohen had a very clear idea where the story was going to end up and the solution to the mystery (which I’m certainly not going to reveal) could have been very satisfying. Cohen’s idea also had the virtue of explaining why Michael had so much trouble discovering his identity.

Had Cohen remained in control it would have been more like The Invaders with the protagonist gradually putting more and more of the pieces together. Neither the production company nor the network seemed to know what to do with this series with the unfortunate result that it lasted only thirteen episodes and so we never do find out the answer to the puzzle. If you buy it on DVD then make sure you watch the series before you watch the interview with Larry Cohen in which he reveals that answer.

A Time to Be Born sets things up. Michael Alden leaves the hospital intent on finding to exactly what Coronet Blue refers to. His search leads him to a party at which he meets Alix Frame (played by one of my all-time favourite actresses, Susan Hampshire). Alix’s father offers him a job selling boats. Alix is searching for something as well but she doesn't know what it is. They fall in love but Michael still has somebody pursuing him trying to kill him so settling down with Alix is obviously not going to be possible. It’s a fine story that sets the tone for the series.

In The Assassins Michael thinks he’s found his mother but he may have found a whole lot of trouble. There’s also a girl to whom he was apparently engaged. He doesn't remember anything about her. Curiously enough the girl doesn’t seem to remember anything about him either. He also gets introduced to a visiting prince. Michael thinks there’s something strange going on but he can’t figure what it is. This seems to be a typical Coronet Blue episode - Michael finds a possible clue to his identity, he meets a girl and falls in love but sinister forces are at work against him. Another very good episode with the trademarks of this series - a vague feeling of uneasiness, of possible deception and manipulation. 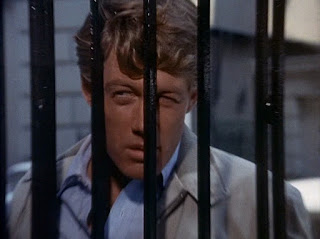 The Rebels takes Michael to college, where he’s employed as a campus security officer but he’s actually being used as an experimental subject by a scientist who thinks he can cure his amnesia. It’s a particularly dire example of American television trying to be socially relevant by confronting the problems facing college kids today. In this case they’re being oppressed by having to attend lectures and do exams. The potential interesting aspects of the story (the experiments with memory) end up being ignored. An atrocious episode.

Another attempt is made on Michael’s life and he ends up taking refuge in a monastery in New York City, in A Dozen Demons. The demons are in a stained glass window. It’s a modern window, painted quite recently, of the Temptation of St Anthony. And the St Anthony in the picture looks exactly like Michael. Michael is convinced that it is him, that he must have been the model. This clue could give him some answers. To help him find the answer he has a crazy artist, the artist’s pretty blonde daughter and a runaway monk who, like Michael, is searching for an identity and a place in the world. This is a much better episode that maintains its focus on Michael’s search for the answer to the Coronet Blue riddle.

In Faces Michael finds a photograph. It was taken at a funeral and he’s in it. The funeral took place in a town called Jennings Grove. A popular local girl had been murdered. Nobody can remember seeing Michael at the funeral and nobody can tell him who he is but he’s sure that if he keeps pushing then somebody must remember something. Meanwhile a young man awaits execution for the murder. It’s a decent mystery story with the twist that Michael can’t be sure that he himself is not the murderer.

In Man Running Michael saves a man from an attempted murder. The man (played with aplomb by Denholm Elliott) is being hunted by agents of a Caribbean military dictatorship. He has come to New York to see his daughter for the first time in ten years. Michael really doesn’t want to get mixed up in this situation but of course he does get involved and the situation gets more complicated. This is an odd episode since mostly the focus is not really on Michael. It’s more a straight thriller story, but enjoyable enough. 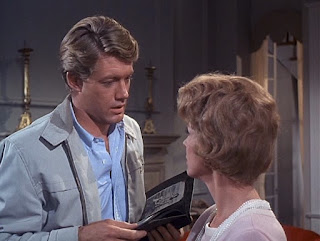 Although A Charade for Murder does involve a murder this is an episode that is characterised by extreme quirkiness and a slightly farcical tone. Michael’s ex-monk friend Tony (introduced in A Dozen Demons) is framed for murder but the real intention had been to frame Michael. The conspiracy is totally over-the-top with a bogus Navy intelligence officer and a ditzy actress doing a fortune-teller spiel. And it’s definitely kind of fun.


Saturday tries to combine some psychological drama with the ongoing mystery plot. A guy who claims to be able to tell him the secret of his identity but on the way to meet him Michael runs into a kid whose father has just died. The kid suddenly has to deal with grown-up problems of identity which is pretty much what Michael faces. It works reasonably well.

In The Presence of Evil a stage magician believes he really has supernatural powers and that they come from Satan. The powers work through his young female assistant and allow her to see the future. What interests Michael is that blue coronet the assistant wears during the performance.

Michael is used to people bring to kill him but what he didn’t expect was that someone would want to send him to Mars. Literally. But that’s what happens in Six Months to Mars. It’s a U.S. Government project but the guy in charge of it is definitely in the mad scientist mould. Interesting episode.

The Flip Side of Timmy Devon presents Michael with another puzzle. Pop star Timmy Devon is dead. The last song he wrote has not yet been released. No-one has heard the song. And yet Michael knows the words. But how does he know them?

Since this series was clearly aimed at a younger demographic a story with a pop music background was an obviously good idea and although the final twist probably won’t come a huge surprise it’s sill pretty well executed. And it has the oddball feel that characterises Coronet Blue at its best. Another good episode. 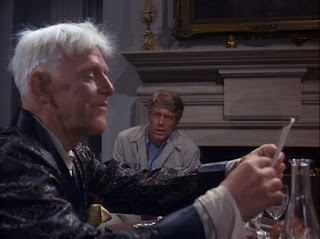 In Where You from and What You Done? Michel is in a smarten in Virginia called Coronet catching a bus when he meets ditzy blonde singer Ava Lou Springer. Or maybe she’s a writer. Or maybe her identity is as uncertain as Michael’s. Or maybe there’s not a word of truth in anything she tells him. She is pretty though and although the last thing Michael really needs is to hook up with a crazy young woman that’s what he does. Although he is worried about the guy at the bus terminal who seemed to be taking a bit too much interest in him. Another good episode.

In Tomoyo Michael sees a Japanese girl in the street and he’s convinced he knew her. Trying to get to talk to her leads him to Mr Omaki’s dojo and gets him beaten up. He learns something from this. He learns that he knows quite a bit about martial arts. But is this going to help him discover his identity? An interesting episode with some reasonable suspense and mystery elements.

In commercial terms Coronet Blue was perhaps a bit too quirky for its own good. I personally like its quirkinesss but structurally it’s a bit too loose. It needed a tighter focus on the ongoing story arc involving Michael’s past. Michael just doesn’t discover enough about his past to keep the mystery and suspense thriller elements interesting. Having said that it’s still an intriguing series that had potential. And the theme song will burrow itself into your brain!

The DVD release offers excellent transfers and a very revealing interview with the show’s creator Larry Cohen. If you like slightly offbeat dramas Coronet Blue is worth a look. Recommended.
Posted by dfordoom at 11:16