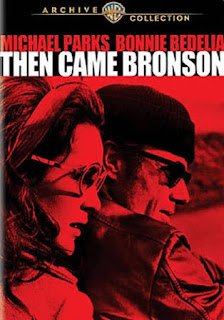 Then Came Bronson is a 1969 TV-movie which served as the pilot for a TV series of the same name. The pilot was given a theatrical release in Europe. The series was not particularly successful, lasting just one season on NBC, but it developed quite a cult following.

For many years the series has been little seen and has never been released on DVD. As a result it has gradually subsided into almost total obscurity. The pilot was released on DVD in the Warner Archive series a few years back but apparently sales were not healthy enough to warrant the release of the series.

Then Came Bronson was basically conceived as Route 66 but with a motorcycle (a 1969 XLH Harley-Davidson Sportster) instead of a Chevy Corvette and with a single protagonist rather than the buddy formula of Route 66. Since Route 66 had been a substantial hit it must have seemed like a good idea at the time.

Michael Parks stars as reporter Jim Bronson. After his best buddy’s suicide and after yet another argument with his editor Jim decides to walk out on his job, hop on his motorcycle (inherited from his dead buddy) and set off to, you know, discover stuff. To find himself. And maybe find America as well. Or something like that.

In fact, reading between the lines, Bronson is a second-rate reporter who is too undisciplined and self-indulgent to be a success but of course he doesn’t see it that way. He feels oppressed by his boss. He needs freedom man. 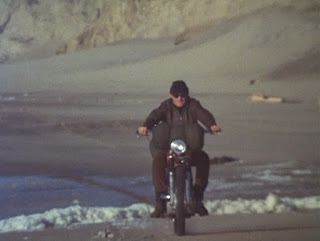 First he decides to take a ride along a beach and he encounters a bride. She then takes her clothes off and runs away. Because it was 1969 so there has to be some gratuitous nudity. Then he encounters some girl in a convertible (she looks like the girl on the beach and maybe she really is the girl on the beach) and after a stormy beginning they hook up together. It seems that the convertible wasn’t actually technically hers and the police seemed like they were going to be tiresome about that so she figures she’ll tag along with Bronson.

So they ride around on Bronson’s motorcycle and have adventures. Only they don’t actually have any adventures. They visit one of Bronson’s buddies, an old Mexican artist (at least he thinks he’s an artist but his art is rubbish).

Bronson and the girl fall in love, well sort of. She falls in love. Bronson isn’t ready for commitment. A committed relationship with his motorcycle is about all he’s capable of. He takes the girl shopping and she displays an intense interest in baby clothes, and Bronson definitely isn’t ready for that.

Then they ride around on Bronson’s motorcycle some more. 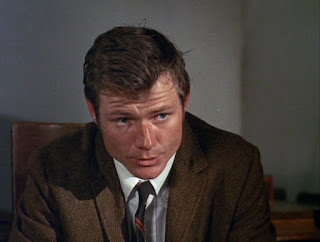 This is not quite a plotless movie but it’s pretty close to being one. Apart from the love story nothing very much happens. And since this is a pilot for a series about a guy riding around on a motorcycle on his own we can be forgiven for being just a tad sceptical as to how the great romance is going to pan out. And it was the 60s, freedom and finding yourself and all that, and marriage and children wasn’t part of that. It does however give us the protagonist’s backstory which does the necessary job of setting things up for the series.

Of course the girl (who doesn’t reveal that her name is Temple Brooks until the end) is trying to find herself as well. Girls did that as well in the 60s but it didn’t necessarily mean spending your whole life on the back of a motorcycle.

The performance of Michael Parks as Bronson is interesting. I guess we’re supposed to see the character as a romantic rebel, but he givers the impression that he’s rebelling against oppressive stuff like taking responsibility and growing up. He’s thirty years old, going on sixteen. Apart from the selfishness there’s a fascinating hint of darkness beneath the surface. Bronson thought he was too sensitive and caring to be a reporter but there’s a fair amount of anger there as well. 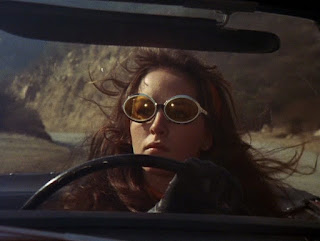 Bonnie Bedelia is pretty good as Temple, and at least she doesn't look like a 60s casualty. She makes the character’s transition from spoilt brat to grown-up woman fairly convincing and she makes Temple oddly likeable - in some ways we’d like to see her and Bronson get together but we suspect that he’d probably wreck her life. Maybe it would be best for her in the long run if riding around on a Harley with a brooding self-absorbed rebel without a clue turned out to be just a stage she had to work through.

Akim Tamiroff overdoes it a bit as the old Mexican artist.

Apart from its obvious affinities with Route 66 it’s also worth comparing this TV pilot to series like the much more interesting Coronet Blue and also to The Fugitive. In both Coronet Blue and The Fugitive the hero is searching for something tangible (his identity and the identity of his wife’s killer respectively). The pilot of Then Came Bronson gives no indication that Bronson has any idea what he is looking for.

On the plus side there’s some nice location shooting and both Bronson and Temple do have some depth. And they do have character arcs of a sort - Temple wants to grow up and Bronson wants to run further and further away from adult responsibilities. 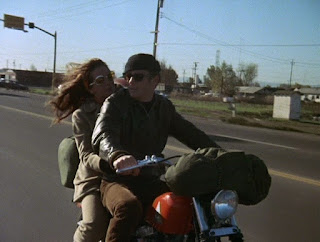 One thing that’s intriguing is that the pilot seems slightly dated for its era. This is 1969 but there’s no sign of the drug culture, and no hippies. Bronson might be an overgrown teenager but he’s not a criminal or a drug dealer (this is a long long way from Easy Rider which came out in the same year). His bike is not a chopper. He’s no outlaw biker. He’s pretty law-abiding. And while the girl may have “borrowed” that convertible without letting the owner know she’s not really a car thief and she’s not really a good girl gone bad. She’s just a bit confused because she’s young (probably around 20) and she’s scared of taking the step into adulthood, which is pretty scary for most of us. Then Came Bronson could be taking place in 1964. It’s an America that was already vanishing by 1969.

Sadly we don’t get to hear Long Lonesome Highway which Michael Parks sings at the end of each episode of the series itself. That song is my most vivid memory from seeing the series many many years ago.

The Warner Archive DVD offers a pretty good transfer which is important because it all takes place outdoors (for a 1969 TV pilot is has a very expansive look).

Is Then Came Bronson worth watching? If you love motorcycles and road movies and you have a high tolerance for the finding yourself thing then you’ll probably enjoy it. If you don’t have much tolerance for those things you might find it heavy going although it’s an interesting social document.
Posted by dfordoom at 08:31