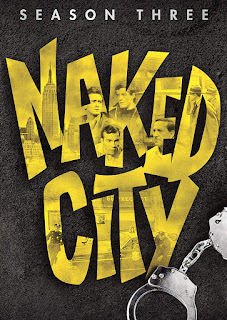 I’ve posted before about Naked City, not just one of the classic American cop shows but one that can truly be described as ground-breaking. It’s not just that it took advantage of the one-hour format (still fairly unusual at the beginning of the 60s) to feature complex plots, it also used the format to add considerably psychological complexity. And it was not afraid to be slightly unconventional or even just the tiniest bit experimental.

The Hot Minerva is definitely an offbeat episode. An extremely valuable classical Greek statue has been stolen from a museum. The thieves and the museum’s curator are all slightly odd, not quite the sorts of thieves that the detectives of the 65th Precinct usually deal with. This story is slightly tongue-in-cheek and slightly whimsical. It’s a quirky episode but it works for me.

A Case Study of Two Savages is about a nice young couple of newlyweds from Arkansas. Ansel Boake (Rip Torn) and his teenage bride Ora Mae are very much in love. Ansel wants to give Ora Mae lots of nice things. The only way he can get these nice things for her is to steal them. And that often involves killing people. In fact Ansel has to kill people for a lot of reasons. Which is OK, because he doesn't mind killing people. And Ora Mae knows that Ansel only kills people because he loves her. A great episode with a terrific performance by Tuesday Weld as Ora Mae.

The Face of the Enemy is a spree killer story, fairly unusual subject matter for 1962. Cornelius Daggett is a war hero. He killed 126 people in 1942 and the Army gave him a medal for it. Unfortunately the only thing that Cornelius Daggett has ever been any good at is killing people. And now the Army doesn’t need him to kill any more people. Nobody needs him to kill any more people. So what the hell does he do now? What he does do is drink and feel sorry for himself. His family doesn't want to know him any more. It was so much easier back on Guadalcanal. Those were good times. He killed people and everybody admired him for it. If only he were back on Guadalcanal. Pretty soon Cornelius Daggett is back on Guadalcanal, in his mind. You know this is not going to end well.

An intriguing episode because on the one hand there’s the temptation to make it a Social Problem Story and make Daggett a victim (and Detective Adam Flint’s social worker instincts are in full cry in this episode) but on the other hand the man is a drunken self-pitying loser and a psychotic killer. The episode veers between these two tendencies, which is sort of interesting. 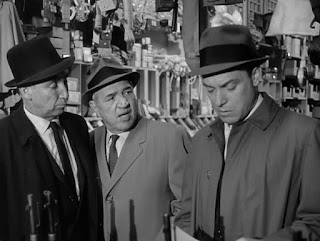 Portrait of a Painter is (naturally) about a painter but it’s really more about evidence, particularly psychiatric evidence, and about preconceived notions affecting an investigation. The case seems open-and-shut. Roger Barmer is an artist with a history of psychiatric problems, including hostility to women, so when his wife is found stabbed to death he’s obviously the prime suspect. Barmer claims to have been out cold and to have found his wife’s body after regaining consciousness. He immediately goes to see his psychiatrist and makes a confession. At least it’s a sort of confession. Detective Flint is not happy about it at all - he feels that the psychiatrist bullied Barmer into the confession and given that Barmer has no memory of having committed the murder he thinks this confession is very very dubious. So he decides to press ahead with the investigation with an open mind. It’s an interesting and rather thought-provoking story, plus William Shatner plays the crazy artist and you just know how much fun that performance is going to be. An extremely good episode.

Let Me Die Before I Wake is quite offbeat. Joe Calageras (Jack Klugman) runs a successful trucking business with his brother Vito (Michael Constantine). The Calageras brothers are Sicilian and they have a pretty conservative outlook on life. They’re popular and well-respected. Then somebody tries to run Joe down in a truck. The truck misses Joe but hits a little girl. All the eyewitnesses are adamant that it was attempted murder but Joe insists it was an accident.

There are a lot of things that Joe doesn’t want to talk about. Like the reason he can’t leave the block. He gets as far as the corner and then he starts to sweat, his vision starts to blur, he gets dizzy. Joe also doesn’t want to talk about his wife Rosie. Unless someone will talk about these things Detectives Adam Flint and Frank Arcaro don’t see how they are going to find out the truth about that hit-run incident.

Maybe some things should get talked about. And maybe some things shouldn’t. Maybe talking about things can make things worse. Maybe it’s best not to know certain things. When there’s a powder keg of emotion ready to blow talking about it can set off the explosion. Is anybody better off then? This is an interesting performance by Klugman - he really keeps a lid on it which is not exactly his usual style. It’s another slightly unconventional but extremely interesting episode. 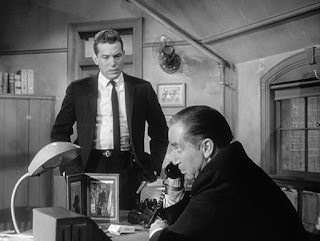 American television in the early 60s started to get rather keen on attempting to address social problems (much as Hollywood had had a minor obsession with Social Problem movies in the 50s). Most of these attempts were pretty cringe-inducing but Naked City was an exception. At times they did this sort of thing remarkably well. The One Marked Hot Gives Cold is an intriguing example. L. Francis Childe (the L stands for Love - yes the poor guy was named Love Childe by his parents) is thirty-one years old and he has a record of occasional outbursts of extreme violence. During his navy service he killed a fellow sailor and served a prison term. Now he’s trying to find his father. He had been left in an orphanage as a boy and had been told his parents were dead but he has reason to believe that his father is alive. He breaks into the orphanage and steals his records.

Childe has befriended a 12-year-old girl named Aggie. He has (or had) a girlfriend, a married woman. Now she has accused him of molesting Aggie. In fact we know that the relationship between Childe and Aggie, although odd, is completely innocent. They’re both lonely and craving someone to talk to. Detectives Flint and Arcaro, and Lieutenant Parker, suspect the the charges are malicious and that the relationship is innocent but when accusations like that are made they obviously have to investigate.

The treatment of the relationship between Childe and his father (when he finds him) is all very much what you expect at this period, rather Freudian and obsessed with the dangers of weak fathers. The Childe-Aggie relationship is quite touching - Aggie is probably the first human being that Childe has felt any liking for and Childe is probably the first person who has ever given Aggie the attention she craves. And he’s probably the first person who has ever taken her problems (the perfectly normal problems of a perfectly normal 12-year-old girl) seriously. This episode carefully avoids sensationalism or crassness. A grown man and a 12-year-old girl riding a merry-go-round and visiting the Children’s Zoo together could have been creepy but it isn’t really - Childe is at about the same level of emotional development as the girl. He just wants a friend.

It’s an example of this sort of thing done sensitively and perceptively. The ending is genuinely moving. It’s a very good episode. 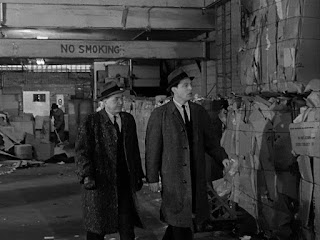 The Fingers of Henri Tourelle is a whodunit episode and a very good one. Fashion house owner Henri Tourelle is murdered. The murder weapon, a gun, cannot be found. Between the time Tourelle died and the time the police arrived it would have been impossible for anyone to have left the building. The murderer therefore must be one of half a dozen people, the inner circle of Tourelle’s fashion empire. Each of them tells his or her story in a flashback. The solution to the puzzle is clever and the means by which Detective Adam Flint finds the solution is equally clever. Great stuff.

The central character of Goodbye Mama, Hello Auntie Maud is a house. It’s a very grand old house and Ellen Annis loves it dearly. Unfortunately her mother, a rich cantankerous old lady who is slowly dying, hates the house and wants to sell it. When Mama dies it comes as no great surprise and really it’s a good thing for everybody. Ellen will get to keep her house. The staff will get to keep their jobs (something both the butler and the chauffeur were rather worried about). And Ellen has told Auntie Maud she can live in the houses as long as she wants to. The police were a little concerned about an odd ’phone call at the time of Mama’s death but since the autopsy showed natural causes the case is soon closed.

The second corpse is more difficult to dismiss so lightly.

There’s some fine acting here from Salome Jens as Ellen, Carroll O’Connor as the butler and James Coburn as the chauffeur. Equally impressive is the subtle but oppressive atmosphere of the house. It’s a lovely old house but it seems to do things to people. An excellent episode, typical of the slightly offbeat nature of this series.

Which Is Joseph Creeley? is another demonstration of the willingness of this series to take major risks. The ending was very daringly unconventional for 1961 network TV. Joseph Creeley is convicted of first degree murder and sentenced to the electric chair. Then it is discovered that he has a brain tumour. An operation is carried out, successfully, and a startling discovery is made - the post-operation Joseph Creeley is an entire different person to the pre-operation version. He has gone from being a crazed killer to being a quiet gentle man. And he has no memory of the murder. In fact he cannot remember anything of the ten years that preceded the murder. 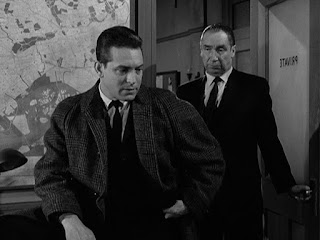 A retrial is ordered and the jury must decide if he can be convicted of a murder that was in effect carried out by a different man. Detective Adam Flint was the arresting officer but now he’s a witness for the defence.

Typically for this series the idea is a good one and it’s developed intelligently and provocatively, without sentimentality and without trying to treat a complex dilemma in simplistic terms. This is an excellent episode.

Ooftus Goofus is the story of George Bick, a little man who is slowly coming to realise that his life amounts to nothing and that nobody will ever take him seriously. He decides to make people listen to him. He starts out with harmless but rather clever pranks, such as switching all the prices at the local supermarket thereby creating pandemonium. The pranks gradually become more dangerous. This is a fine example of Naked City’s willingness to take risks. This story mixes whimsicality with pathos and tragedy. It has to tread a very fine line between sentimentality and black humour and between inspired whimsy and mere silliness. Somehow it succeeds and it’s genuinely moving. Mickey Rooney as George and Maureen Stapleton as his wife give bravura performances that still manage to feel real. A very fine episode.

One of the great cop shows and one that took TV police drama in risky but rewarding new directions.