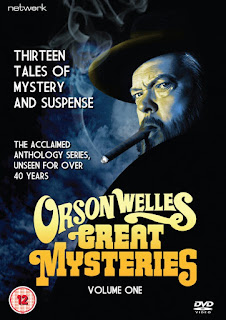 Orson Welles Great Mysteries is another of the mystery/horror anthology series that enjoyed such a vogue from the mid-50s right through to the end of the 70s. This one was made by Anglia Television in Britain in 1973  and was shot in colour. It’s somewhat in the style of the classic Alfred Hitchcock Presents, with an emphasis on human weakness and evil rather than the supernatural (although there are occasional suggestions of the supernatural).

The only contribution that Welles actually makes to the series is his brief into and outs, which almost certainly would have been done in a single day. But Welles did earn his money - his amused cynicism does add to the atmosphere.

Even by the standards of half-hour television drama these stories are rather simple, with just one little sting in the tail. Sometimes the payoff isn’t quite as satisfactory as one might have hoped, and too often it’s too easy to see the payoff coming.

In some ways the lack of ambition is a plus. The stories are for the most part just amusing and ironic little vignettes but they manage to be generally entertaining. Many have period settings and despite obviously limited budgets they do capture at least some of the feel of mystery tales of a bygone era, although the 1970s haircuts sported by the men do make the suspension of disbelief that much more difficult to sustain. It also has to be said that the historical episodes do suffer from a few anachronisms in terms of social mores and from an occasional tendency to present caricatured views of social attitudes of the past. These are of course a problem with every television series or movie with a period setting but they seem a bit more noticeable in this one.

The better episodes are however quite good.

There are quite a few stories by acknowledged masters, writers of the calibre of Wilkie Collins, Balzac, Charles Dickens, W.W. Jacobs and Sir Arthur Conan Doyle and also some lesser-known but interesting writers (including some writers who have fallen entirely into obscurity).

This was  time when British television was starting to up the ante as far as violence was concerned, and to a lesser extent becoming a bit more daring in regard to sexual content. Orson Welles Great Mysteries is however very subdued in its treatment of such matters. The violence is mostly offscreen. The general approach is low-key. Compared to Brian Clemens’ Thriller anthology series, which began to air at around the same time, it seems rather genteel. This is however part of its charm. It’s content to be subtle and to rely on suggestion. 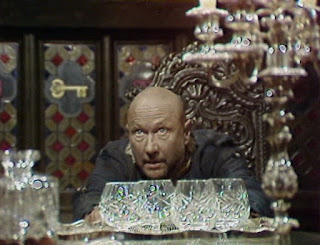 There’s quite an array of acting talent on view in this series including quite a few who were already major stars (such as Susannah York and Bond girl Jane Seymour). And there are plenty of cult movie stars, like Christopher Lee, Peter Cushing and Donald Pleasence. And some good directors, like Peter Sasdy.

For some bizarre reason Network have decided to release only thirteen of the twenty-six episodes in a two-disc DVD set. Whether the other thirteen ever see the light of day remains to be seen. The transfers are reasonably good.

Episode Guide
In A Terribly Strange Bed (based on a famous story by Wilkie Collins) a well-to-do young man wins a great deal of money in a very disreputable gambling house in Paris sometime in the mid-19th century. Unfortunately he celebrates a little too enthusiastically with the result the he is in absolutely no condition to make his way safely back to his hotel. Luckily there is a proud old soldier, a veteran of Austerlitz and Borodino, who arranges a bed for him for the night. But will the young man make it through this night? Not a bad episode but there’s not much of a payoff.

Compliments of the Season is set in London in 1930. A little girl, the daughter of an American millionaire and an English lady of quality, loses her rag doll. It’s a very disreputable rag doll but it’s the little girl’s most treasured possession. An American derelict is lucky enough to find the doll. Will he be lucky enough to live long enough to claim the reward? Amusing enough but with no real substance.

The Monkey's Paw by W.W. Jacobs has been filmed many times. A soldier brings a monkey’s paw back from India. It has the ability to grant three wishes. The problem with wishes is that sometimes they come true. This is a good version of a classic tale.

The Ingenious Reporter is set in the pre-World War 2 period. A brash young American reporter who sees a brutal murder in a French village as a chance to get the story of a lifetime. He gets more than he bargained for. There’s such a thing as being too clever. Not a bad episode, if a little predictable. 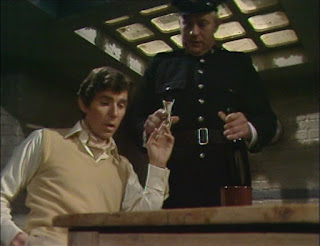 Captain Rogers is about a man with a past. Mr Mullet is a prosperous innkeeper and he’s rather alarmed when a fellow named Cawser shows up on his doorstep. You see Mr Mullet was once the notorious pirate Captain Rogers and Cawser was one of his officers. Captain Rogers amassed a vast fortune from his piratical adventures and Cawser wants half of it. If he doesn’t get it he’ll have a quiet word to the local magistrate and Mr Mullet will face the prospect of being hanged for piracy. It’s a ticklish problem. Great performances by Donald Pleasence as Cawser, Joseph O’Conor as Mullet and Willoughby Goddard as the local squire and magistrate. The first really excellent episode so far.

For Sale - Silence has a contemporary setting. A wealthy businessman is being blackmailed. This story actually manages to come up with a new twist to the blackmail game. A very neat little episode.

La Grande Breteche is based on story by Balzac. A handsome dashing young Spaniard is a prisoner-of-war of the French during the Napoleonic Wars. As was the custom at the time, being a gentleman of breeding and an officer and having given his word not to escape, he is housed comfortably in an inn and allowed to come and go freely. Nearby in the house known as La Breteche lives the Count Gerard De Merret (Peter Cushing) with his wife. The Countess (played by Susannah York) is much younger than her husband, she is very beautiful and she has a romantic and passionate nature. You can see where such a situation could lead. In fact it leads to a horrifying conclusion. An excellent episode with a very nasty sting in the tail.

An Affair of Honour by F. Britten Austin. When a soldier commits treason it can of course be dealt with by a court-martial, but sometimes that is not the most desirable way to handle the matter. It is better to leave it as an affair of honour. In this case there was however a twist. A reasonably decent story. 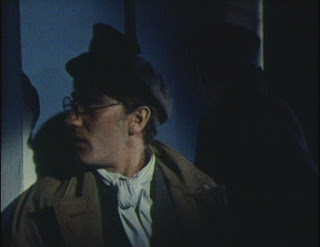 In the Confessional is based on a story by Alice Scanlan Reach, a now very obscure writer who in the 1960s penned a series of clerical detective stories featuring kindly Irish Catholic priest in an American parish. In this tale Father Crumlish hears a disturbing confession, and an amiable drunk named Old Harry hears it too. There are all kinds of sins. The twist ending is fairly effective. A reasonably good episode.

The Furnished Room (based on a story by O. Henry) is unusual in that we’re offered, in the intro by Orson Welles, a hint of the possibility of the supernatural. Whether anything supernatural actually occurs is something I’m not going to tell you. A young man is tramping from one furnished room to another in New York, looking for his girlfriend. This story relies very heavily on trying, with limited success, to achieve an atmosphere of subtle ambiguous unease. Unfortunately it’s also a story that doesn’t amount to very much. One of the lesser episodes.

Trial for Murder is the one old-fashioned ghost story in the series (and it’s based on a very famous story by Charles Dickens). A juror in a murder trial sees the ghost of the murder victim, or perhaps it’s an hallucination. The accused sees visions as well. For me this one falls rather flat. Perhaps there’s such a thing as trying to be too subtle.

The Leather Funnel (based on a story by Conan Doyle) is one of the better episodes. The funnel in question is very old, a kind of bizarre family heirloom. It has an interesting if terrible history, as young Stephen Barrow is about to find out. Stephen n is about to marry the beautiful Veronique d’Aubray (Jane Seymour) but before that happens her uncle (plated by Christopher Lee) is determined that the young man should know the secret of the funnel. This episode has both a contemporary and an historical setting and it has a nicely ambiguous plot. Good stuff.

If you enjoy the Alfred Hitchcock Presents style of television mystery then Orson Welles Great Mysteries is worth grabbing. Recommended.