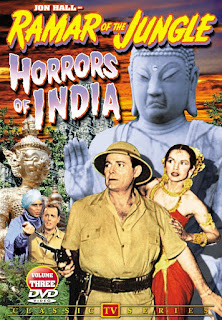 Jungle adventures were a big thing on American television in the 1950s. It was a genre that soldiered on into the 1960s. By the 70s such shows were starting to be seen as too politically incorrect (the term political correctness exploded in popularity in the 90s but the concept certainly existed by the end of the 60s. The jungle adventure series became just too risky. But it was a genre that had a good run. Ramar of the Jungle was a syndicated series that ran from 1952 to 1954 and it was typical of the breed. 52 episodes were made, in four batches of thirteen.

Mostly the series takes place in Africa but the second batch of episodes was set in India.

Tom Reynolds (Jon Hall) is a doctor who spends his life treating the sick in the jungles of Africa and India. He is aided by the young Professor Howard Ogden (Ray Montgomery). Reynolds has become known as Ramar which we are told means White Medicine Man. In India they get some help from their faithful servant Zahir (who is actually pretty brave and resourceful).

With a series like this you have to keep in mind they were never intended as sophisticated entertainment. These jungle adventure shows were aimed at younger viewers, the same sort of audience that watched lightweight westerns like The Cisco Kid, The Lone Ranger and Annie Oakley. They had to be reasonably exciting but without being really scary and the violence had to be kept strictly within bounds. The good guys had to triumph and they had to do so without doing anything underhand. Within those constraints Ramar of the Jungle does a fairly decent job.

One of the great attractions of these jungle adventure series was that if you were prepared to rely very heavily on stock footage (and the producers always were willing to do so) they could be made very cheaply and still have that exotic feel to them. And given that TV was in black-and-white in those days and also given the fairly low quality of TV reception the stock footage didn’t stand out the way it would in later television eras. Ramar of the Jungle actually makes quite effective use of stock footage. Surprisingly the stock footage features actual Indian wildlife rather than just random jungle animals. 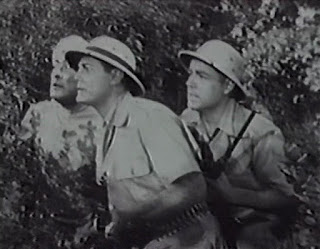 Adult viewers would undoubtedly figure out very quickly that such shortcuts were being employed but the target audience of kids probably would not have noticed.

The acting is adequate for the kind of series this is.

Of course the political incorrectness level is off the scale. By the early 50s India was an independent nation but the series still has very much the atmosphere of the Raj, although with the Americans taking the place of the British. The political incorrectness is undoubtedly mostly unconscious and probably without any malice. There’s simply an assumption that the natives are inherently superstitious and inclined to follow murderous cults. I suspect the writers were actually trying to be respectful towards the locals. The maharajah is a decent man and quite enlightened. Zahir is a good chap whose bravery is never in doubt. Indian women are treated very respectfully by the writers. There’s a Sikh policeman who turns out to be honest, courageous and very competent.

There’s just that assumption that the natives need the White Ramar to save them all the time. To a large extent the series is simply basing itself on well-established templates for jungle adventure stories going back to the 19th century and it doesn’t seem to have occurred to them to update the templates to reflect Indian independence. But I really don’t think there was any actual intention to demean the Indians. By the standards of the early 50s it may indeed have had perfectly good intentions.

Alpha Video have released the majority of episodes on DVD. The DVD I’m reviewing at the moment includes four episodes from the second batch and is subtitled Horrors of India. The transfers are what you expect for an early 50s TV series. They’re rough but watchable.

The first of the four episodes on this disc is Mark of Shaitan. Reynolds and Ogden have just arrived in India to do some medical research and some doctoring in the territory of an enlightened maharajah. They encounter Max Kruger who is convinced that Reynolds is really searching for the lost treasure of the followers of Shaitan. He is quite paranoid on the subject.

Ogden is attacked and left with a strange marking, which seemingly cannot be removed, that is apparently the mark of Shaitan. When a man receives that mark he is doomed. When the mark fades, he will die. Ogden doesn’t believe such superstitions but he does get sick. Reynolds suspects he knows what is really going on. But can he save his friend? And is there really a treasure? 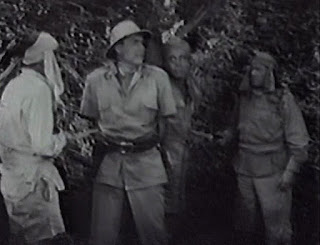 If you’re going to have your hero in India then at some stage he’s going to have to encounter the Thugs and the cult of Kali and that’s what happens in The Hidden Treasure. In reality of course there’s a lot more to the worship of Kali than Thuggee but in popular culture Kali-worshippers tend to be murderous and evil. The treatment of the subject in this episode therefore comes as quite a surprise. There are certainly dirty deeds afoot but this story avoids that automatic assumption that Kali’s worshippers are evil. It starts with a dying man and a hunt for a talisman. It’s not a bad episode.

In Bride of the Idol the followers of an evil god have kidnapped a girl named Najia. They intend to make her the bride of their god. What happens to the bride after the wedding is not stated but we can rest assured it won’t be good for poor Najia. Can Tom Reynolds save her? He’s certainly going to try. Indian actress Sujata (as Najia) adds a touch of glamour to this story. The plan devised by the White Ramar is clever enough. It’s all quite entertaining.

The Crocodile God of Kaa pits Reynolds and Ogden against another murderous cult, this time the worshippers of a crocodile god. They’re pretty unpleasant, practising human sacrifice. Their priests are reputed to have the strength of five ordinary men. This turns out to be true and Reynolds has to find out how they manage this. It cannot be magic so it must have a scientific explanation. He has to find the answer to save the locals who keep getting sacrificed to the crocodile god. A reasonably OK episode.

The Indian setting of these episodes makes a change from the more usual African settings. Ramar of the Jungle is undemanding fun if you love the jungle adventure genre, and if do do love that genre it’s worth a look.
Posted by dfordoom at 05:50