Regan and the Deal of the Century (The Sweeney novel) 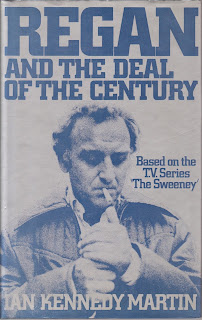 Like so many TV series of its era The Sweeney spawned a series of TV tie-in novels. Regan and the Deal of the Century was the third of The Sweeney novels and was written by Ian Kennedy Martin, the creator of the TV series. Nine novels were published, three of them by Kennedy Martin, and they were original stories rather than novelisations of TV episodes.

So the first surprise is just how different it is to the series. The series was very much a buddy series, with Detective Inspector Jack Regan of Scotland Yard’s elite Flying Squad and his sergeant George Carter being the buddies. There is some slight tension between the two men. Regan doesn’t just bend the rules. He beats them senseless and then puts the boot in. Carter isn’t always happy about this, and he lets Regan know. Despite this the two men are firm friends. Carter is scarcely even mentioned in this novel, but when he is mentioned it’s obvious that Regan doesn’t like him all that much. The novel appeared in 1976. The series aired between 1974 and 1978. It would be fascinating to know if the novel represents Kennedy Martin’s original concept for the series, and whether that concept involved a much tighter focus on Regan, or whether Kennedy Martin simply decided to try something slightly different with his three spin-off novels.

The second surprise is that the novel takes place almost entirely in the south of France. Taking Regan out of his familiar London milieu changes the tone dramatically.

This is essentially a political thriller rather than a cop story, but since Regan is a cop to his boot-heels he naturally tries to approach it as a police case. His job is to catch villains. That’s pretty much what gives the novel its flavour - Regan is very much a fish out of water in the world of international intrigue.

The novel starts with the assassination of an Arab oil sheikh in London, to which Regan just happens to be an almost-witness (he saw the killer leaving the building and is the only man who can identify that killer). This is obviously a job for Britain’s secret police, Special Branch. So why has Regan been assigned to the case? Whatever the reason Regan is not happy about it.

Regan finds himself working with a Bahreini cop named Hijaz. He doesn’t entirely trust Hijaz, but Regan is also more than half convinced that everything Special Branch has told him is a pack of lies as well.

It appears that the assassin’s next target will be another oil sheikh, a man named Almadi.

This brings Regan into intimate contact with Almadi’s entourage, specifically Almadi’s girls. Almadi likes to be surrounded by beautiful women. Beautiful is perhaps not an adequate word. These girls are technically prostitutes but they are so stingy gorgeous that it takes Regan’s breath away and they are very very high class and very very expensive. For the price of one night with such a girl you could buy yourself a very decent car. Not a used car. A new one. If fact a night with one of these girls would cost Jack Regan most of a year’s salary. Naturally Jack falls for one of the girls, an exquisite English rose named Jo. It’s not just lust (as it usually is for Jack with women). He thinks she’s the most perfect female who ever walked the Earth. But she belongs to Sheikh Almadi. Which doesn’t stop her from hopping into Jack’s bed. This is likely to get Jack into a world of hurt.

As for the case, Regan is more and inclined to think that there’s a whole lot more going on here that he hasn’t been told about. There’s the matter of the deal with the French government. What the deal might involve he has absolutely no idea.

This is pretty much the Jack Regan of the TV series, but maybe even more pessimistic and more cynical and definitely more given to depression. He drinks too much. But he drinks too much in the TV series as well. He chases women he shouldn’t chase. He argues with his superiors and clashes with just about everybody. He doesn’t have any actual dislike of Arabs, or of the French. Jack just doesn’t have the knack of keeping his mouth shut and following orders and coöperating with other place officers. The one mystery is perhaps Jo’s attraction to him. This is a girl who has billionaires eating out of her hand. Maybe she just has a thing for alcoholic self-pitying broken-down policemen with no future. Maybe they just drive her wild with desire.

Reagan is very much an anti-hero but despite his egregious character flaws we can’t help liking him, even if we sometimes despise him just a little as well and even if we’re often horrified by him. He does his best as a cop, and usually gets results. As a man he does his best also, with much less successful results. But he is what he is, and he doesn’t know any other way to live. He doesn’t really know how to do anything but be a cop so it’s lucky he’s a good one.

There’s some politics in this novel but the political aspects are not always quite what you’re expecting. It won’t do to jump to conclusions about who the bad guys are. And in this world it’s questionable whether there are any good guys.

It’s perhaps a little disappointing that Regan's fascinatingly ambivalent relationships with both Carter and with his immediate superior DCI Haskins, which are highlights of the series, play no part in the novel. But Regan’s very uneasy relationships with authority in general certainly do play a major rôle.

Apart from the very distinctive character of Regan the novel doesn’t bear much resemblance to the TV series but it’s a decent political thriller. Regan and the Deal of the Century is worth a look and it is interesting for fans of the series to see Jack Regan in an unfamiliar environment. Recommended.
Posted by dfordoom at 23:00