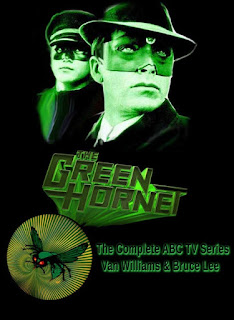 They say timing is everything and that turned out to be true, in a sadly ironic way, for the ill-fated television series The Green Hornet. When Batman proved to be gigantic success for ABC in 1966 the network naturally wanted more of the same. So The Green Hornet was rushed into production. It premiered in September 1966. Audiences saw it as a blander and duller version of Batman and they weren’t interested. Only twenty-six episodes were made.

Newspaper publisher Britt Reid (Van Williams) has a secret life as the Green Hornet, a notorious masked criminal who is actually waging an implacable war against crime. Apart from his assistant Kato (played by martial arts legend Bruce Lee) and his secretary the only person who knows the truth is the District Attorney.

The comparisons to Batman were inevitable. Both series are about mild-mannered, even slightly timid, fabulously wealthy men who are actually masked crime-fighters. The true identities of these daring crime-fighters are unknown to the public. Both Batman and the Green Hornet have faithful assistants who also wear masks. Both drive custom cars loaded with gadgets. Both have secret headquarters with cunningly concealed entrances. Both take on major villains the police are unable to touch. It was just not ever going to be possible to avoid comparisons been the two.

The tone is much more serious and even slightly dark. This is a hero who fights criminals who are ruthless murderers. 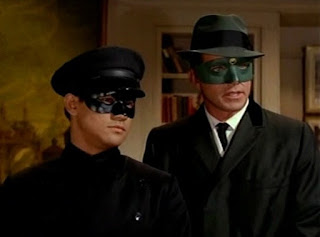 The acting is much more naturalistic than you’ll find in Batman. Van Williams as Britt Reid/the Green Hornet and Bruce Lee as Kato play their rôles absolutely straight. Some of the villains are slightly exaggerated but in a melodrama stye (such as you find in 1930s/1940s serials) rather than an over-the-top comic-strip high camp style,

Had The Green Hornet been made a couple of years earlier or a couple of years later it might have had a good chance of being treated on its own merits and of being reasonably successful. But appearing in 1966 it was going to be seen as an unsatisfactory Batman clone and as such it was doomed. It’s unfortunate because The Green Hornet has a unique flavour and it is in fact vastly superior to Batman.

In a very economical manner The Silent Gun fills us in on the setup and the characters, and it sets the tone for the series. A murder has been committed and the weapon used is a gun that is totally silent and has no muzzle flash. Such a gun obviously has the potential to be horrifyingly dangerous in the wrong hands. The Green Hornet has to find it destroy it but some rather nasty gangsters are after that gun as well. It’s a solid series opener.

In Give 'Em Enough Rope Reid’s newspaper The Daily Sentinel has rashly accused a crooked businessman of faking an injury to get an insurance pay-out. Even more rashly The Sentinel published the accusation without proof and now they’re getting sued. The Green Hornet will have to find the proof and with luck also help to get a dangerous criminal off the streets. A reasonably decent episode.


Programmed for Death is the first episode to introduce some slightly outlandish elements. A Daily Sentinel reporter is murdered. The murder weapon is a leopard. There’s a mad scientist type manufacturing fake diamonds. Even why those elements it’s still much much more reality-based than Batman. It’s a pretty cool episode.

Crime Wave concerns a series of daring robberies for which the Green Hornet is framed. Also mixed up in the affair is a computer genius who tells Britt Reid that he can predict the Green Hornet’s next crime, not knowing that Reid is actually the Green Hornet. An OK episode that doesn’t quite manage to make full advantage of a promising idea. 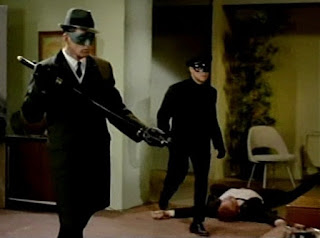 The Frog Is a Deadly Weapon starts with a body fished out of the harbour. Britt Reid believes there’s a connection to a dead gangster, a dead gangster in whom he has a personal interest. It’s not a dazzlingly original idea but it’s executed reasonably well.

Eat, Drink, and Be Dead pits the Green Hornet against a bootlegging gang. The Black Beauty is really the star of this episode, showing off its almost indestructible qualities and its awesome firepower. It’s not too bad and there’s plenty of action.

Brainwashing and mind control techniques developed by an unfortunate scientist are the key ingredients in the two-parter Beautiful Dreamer. Peter Eden's exclusive health club offers more than just health. It’s a front for a clever criminal operation, and Eden has no cripples about getting rid of people who threaten his profitable sideline. He also has some very effective means for doing so which he intends to use against the Green Hornet. A good episode and it has a couple of terrific Bruce Lee moments in it.

In The Ray Is for Killing an art exhibition at Britt Reid’s home is the target for thieves using an ingenious weapon - a laser beam. Another fun episode.

In The Preying Mantis a protection racket is operating in Chinatown and tong involvement is suspected. But are the tongs the good guys or the bad guys? And Kato gets a personal grudge to settle. A great episode for Bruce Lee fans.

In The Hunters and the Hunted big game hunters from the Explorers Club are hunting human prey - racketeers. But maybe it’s not as simple as that and in any case since the Green Hornet is next on their hit list he’s going to have to do something. This is a good example of the distinctive tone of this series - fairly gritty stories of crime and gangsters but with a few outlandish touches to liven things up. Good episode.

The Secret of the Sally Bell is more of a hardboiled crime story, with both a big-time drug dealer and the Green Hornet trying to find a stash of drugs hidden aboard the salvaged freighter Sally Bell. Not a bad episode.

In Freeway to Death the Green Hornet is trying to expose an insurance racket in the construction industry. Ace Sentinel reporter Mike Axford tries to play a lone hand and it might cost him his life. A decent episode. 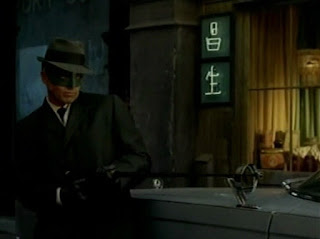 A firebug has to be stopped in The Hornet and the Firefly and Mike Axford thinks the best way is the Sentinel to hire ex-cop Ben Wade who supposedly knows everything there is to know about arson. What’s actually going on in this episode is perhaps a bit too obvious.

In Seek, Stalk, and Destroy a tank is stolen, and as you might exit the District Attorney is not very happy about the idea of someone driving around the city in a tank. Britt has reason to suspect the theft is connected with the case of a man currently on Death Row, a man Britt believes to be innocent. A fairly good episode.

There’s a fake Green Hornet on the loose in the two-parter Corpse of the Year and he’s carrying out a terror campaign against the Daily Sentinel. But maybe it isn’t that simple. A pretty good newspaper/crime drama story and another example of how this series really was very very different from Batman. There’s quite a high body count in this one and a certain amount of grittiness. There’s also a reasonably solid mystery plot with some good misdirection. A very good episode.

In Ace in the Hole two rival gangsters have joined forces and the Green Hornet forces his way into the deal as well. With, of course, the intention of double-crossing both gangsters and bringing them to justice. But as usual Mike Axford blunders his way into the middle of things. A good episode with some fine Bruce Lee fight scenes.

Bad Bet on a 459-Silent is another hardboiled episode. The Green Hornet is on the trail of some crooked cops but in the process he gets shot. Of course he can’t go to a doctor or a hospital - every doctor and hospital in the city is being watched by the cops. His solution to this dilemma is quite clever. A pretty good episode.

Trouble for Prince Charming sees the Green Hornet trying to avoid an international incident and also trying to ensure that the course of true love runs smoothly. The Price of Kahara is about to marry an American girl. Somebody wants to get rid of the prince and they’re prepared to use the girl to achieve that end. A good episode and there’s a great Bruce Lee moment at the end.

Alias the Scarf is not a typical episode. There are no gangsters and it has the atmosphere of a horror movie rather than a hardboiled crime tale. It even takes place mostly in fog! The local wax museum’s new star attraction is the Green Hornet, displacing the previous main attraction, The Scarf. The Scarf was a notorious serial killer but nothing has been heard of him for years so he’s obviously dead. Except that he is now stalking the streets of the city once again. The key to the mystery could be a stripper named Vina with whom The Scarf had an odd relationship. The mystery in this one is easy enough to figure out. The atmosphere is fun though and John Carradine is good as well. 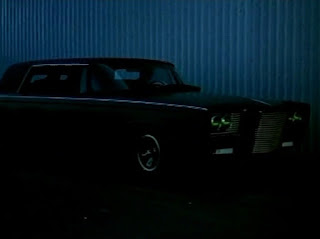 Britt Reid is facing a murder rap in Hornet, Save Thyself. Since he was holding the fatal gun at the time it was fired and there were a dozen witnesses things look grim. The solution is quite clever and there’s some excitement in the scenes at the cleaning plant. A very good episode.

Invasion from Outer Space represents a change of pace for the series. Perhaps it was an attempt to give The Green Hornet a bit more Batman-like outrageousness. This episode even starts uncharacteristically, with the camera focusing in on Miss Case’s legs (and since she’s wearing a very short skirt there’s plenty of leg to focus on). It’s odd that the series really didn’t give Wende Wagner much of a chance to display her potential for glamour. Then we get an alien invasion, and more glamour. The alien chief’s sidekick is extremely dangerous but she’s also a very definite babe. This is all very atypical for this series. And once the secret of the aliens is revealed the Batman resemblances are increased.

And we get a villain named Dr Mabuse. Dr Mabuse was the super-villain in a series of movies dating back to 1922 but the series had been revived in Germany in the early 60s with Fritz Lang’s brilliant The 1,000 Eyes of Dr Mabuse which had been followed by several sequels (such as Dr Mabuse vs Scotland Yard). The Dr Mabuse films achieved considerable international success. It’s fun to see them referenced here and the villain in this episode really is in the grand Mabuse tradition. It's over-the-top but enjoyable.

The Green Hornet was an unlucky series at the time and it’s misfortunes have continued to the present day with complex rights issues preventing an official DVD release. Some episodes were released on VHS years ago and there are grey market DVD sets available.

Comparing The Green Hornet to the Batman TV series is a mistake. It’s much closer in feel to the original Green Hornet serials of the 40s with a masked crime-fighter battling racketeers. There are gadgets but they just add a bit of spice, they’re not the focus. These are mostly hardboiled crime stories with just a touch of outrageous adventure. Highly recommended.