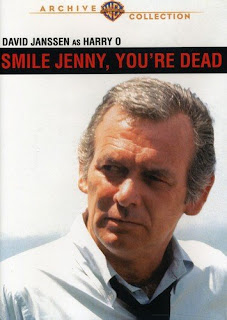 The Fugitive made David Janssen a very big star. His career was a bit up-and-down after that. In 1973 he starred in a feature-length pilot for a proposed private eye series called Harry O. The pilot was Such Dust As Dreams Are Made On and it failed and the series was not picked up. A year later a second pilot, Smile Jenny, You're Dead, was made and this time Harry O was picked up by ABC.

The series was however destined to have a troubled history. The first 13 episodes were set in San Diego. Ratings were not all that great and the network decided the series was too unconventional. They demanded that it be transformed into a much more orthodox  private eye series, to be set in Los Angeles. So the second half of the first season was almost a different series. It was renewed for a second season, ratings were reasonable but ABC felt the series was still too intelligent and had worrying traces of originality. Harry O was cancelled in favour of Charlie’s Angels, a series dumb enough that even TV network executives could understand it.

It’s not difficult to see why Such Dust As Dreams Are Made On did not please the networks. It’s not so much that it’s rather dark. It’s more the character of Harry O (he’s actually Harry Orwell). He’s about as cheerful as you would expect a guy to be with a bullet lodged in his spine because when he was a cop some punk shot him during a robbery and now he’s in constant pain. And he’s  a very fallible private detective. He makes mistakes that put people in danger and he makes one really big, and costly, mistake. He chases women but most of the time he’s barely civil with his girlfriends. His sense of humour, such as it is, is pretty bleak. Harry Orwell isn’t loveable. He’s cynical. He doesn’t lack guts but he has no great interest in being a conventional hero. He’s not a white knight who rescues damsels in distress or helps out widows and orphans. He isn’t overly fond of people. He’s the sort of lead character who would make a network executive very nervous.

That’s not to say that he lacks charisma. It’s just that it’s a weird downbeat charisma. He’s actually a fascinating character. You want to find out more about him. But he’s not a conventional hero and network television likes conventional heroes.

I intensely disliked The Fugitive but that had nothing to do with David Janssen. I hated the concept of the Fugitive and I hated the scripts. Harry Orwell is a much more interesting character and David Janssen is perfect in the rôle. He gives a very low-key performance, in fact almost minimalist, but he doesn’t make Harry bland. Not at all. A really good actor in the right rôle can be low-key but still make a character fascinating and that’s what Janssen does.

The plot has an intriguing premise. A guy breaks into his house and at gunpoint tries to force Harry to accept a large amount of money. The guy is Harlan Garrison (Martin Sheen) and he explains that he’s the guy who shot Harry four years ago. Now he wants Harry's help because the other guy involved in that robbery is trying to kill him.

Such Dust As Dreams Are Made On is smart and quirky and fascinating. No wonder the network executives hated it.

Now my guess is that Harry O creator Howard Rodman, who had been around the TV industry for a long time, knew that his idea for a slightly offbeat private eye series about a very offbeat private eye was a very good idea. But words like unconventional and offbeat make network executives break out in a cold sweat. So he decided that the only way to sell his idea to a network was to give the impression that Harry O was going to be an utterly conventional private eye series. Once he had persuaded a network to pick up the series he could always do his best to make it the offbeat series he’d always intended it to be. So when he wrote the script for the second pilot, Smile Jenny, You're Dead, he made it absolutely conventional. Five minutes into it you not only know every single thing that is going to happen, you know how it is going to happen. And sure enough that’s exactly how it happens.

It starts off with a model named Jennifer who wants a divorce so she can marry her new boyfriend. But there’s this photographer guy who’s obsessed with Jennifer and he decides he has to kill any man that Jennifer is involved with.

Harry of course falls for Jennifer. It’s difficult to understand why anyone would want anything to do with Jennifer - even by the standards of airhead fashion models she’s selfish, shallow and not very bright. But the detective has to fall in love with the woman who’s in danger. Anything else would be vaguely original and Smile Jenny, You're Dead avoids originality like poison.

Not surprisingly the ABC network executives absolutely loved it and Harry O was picked up as a series.

The sub-plot with Jodie Foster is quite amusing but like everything else about Smile Jenny, You're Dead it was a wasted opportunity - both Jodie Foster and David Janssen were capable of doing a lot more with that sub-plot.

It’s perfectly understandable that Smile Jenny, You're Dead is the way it is. There is nothing that warms the heart of a TV network executive more than that combination of predictability, maudlin sentimentality and unoriginality. If you want to get to make a TV series you have to make the network execs think that you’re going to give them something absolutely safe. Once you’ve persuaded them to give you the green light you can try to make your actual series witty and intelligent and original. You might even get away with it for the first season. That seems to have been the trajectory followed by Harry O - a quirky and incredibly interesting first two-thirds of season one before the network lowered the boom and insisted on the removal of disturbing original ideas.

Even with the network pushing the series in the direction of risk-averse conventionality the first season of Harry O is still surprisingly good and I’ll be having much more to say about it in the near future.

In the meantime Such Dust As Dreams Are Made On (which is included in the season one boxed set) is very highly recommended while Smile Jenny, You're Dead (released separately) is reasonably entertaining.
Posted by dfordoom at 21:46