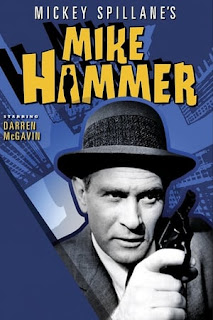 In the late 1940s Mickey Spillane revolutionised the private eye novel by massively increasing the amount of sex and violence and adding a dash of sadism for good measure. Critics were aghast but readers loved Spillane’s Mike Hammer crime thrillers which went on to sell several hundred million copies.

Bringing Mike Hammer to the small screen in the late 1950s was always going to be quite a challenge. The sex and violence wold have to be dialled way way down. The danger was that Hammer would end up being just another generic television private eye. The syndicated Mickey Spillane's Mike Hammer TV series (which debuted in 1958 and lasted for 78 episodes) somehow managed to solve this insoluble problem. It retains at least some of the flavour of Spillane’s novels and it’s astonishingly violent for its time. It adds some humour to make things a bit more palatable but it’s still pretty hard-edged.

The awkward part of course is that Mike Hammer is the hero and we have to like him. Somehow McGavin contrives to pull off that trick as well. Hammer can be brutal and sadistic but he can also be charming and sensitive. We just can’t help liking this guy. That’s actually not too far removed from Spillane’s original creation either - Spillane’s Hammer divides people into good people and bad people. He’ll do anything for good people but he shows no mercy to bad people. Spillane’s Hammer also divides women into two categories. Ladies and nice girls get treated with a great deal of respect. Bad girls just exist to be used for sex. In the TV series this latter aspect is obviously toned down a little but it’s still pretty clear that Hammer does see women as filling into those two categories. 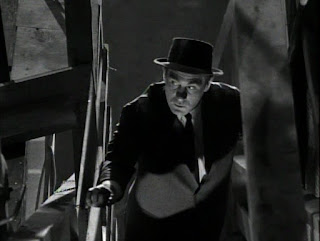 Like most crime series of its era this one was made within very tight budgetary limits and with very tight shooting schedules. The best crime series of this period (like M Squad) made that liability into an asset and had extraordinary energy and urgency. And that’s certainly true of Mickey Spillane’s Mike Hammer.

I still think it’s a pity that Velda, Mike’s gun-toting secretary in the books, doesn’t appear in the series but I can understand why she was left out. The half-hour format demands very tight scripts with no room for sub-plots or distractions and her presence might have slowed down the action. And Darren McGavin has more than enough charisma to carry the series on his own.

The first season was successful enough to justify a second which followed in 1959 and the second season (of 39 episodes) is the formula as before and it’s just as good.

The complete series has been released in Region 1 in a DVD boxed set and it looks pretty good for a 1950s television series.

Evidence on the Record is a fun episode with Mike getting mixed up with crooked dealings in the jukebox industry.

The Commodore is a lesser episode but it manages to be a feelgood story without resorting to too much sentimentality. An old man is being fired into an old folks’ home by his niece’s husband. It’s all to do with some money (obtained by less than honest means) which has gone missing and that leads to murder. The police have their suspect and he’s certainly a very obvious one but while he’s no angel he might not necessarily be a murderer. Darren McGavin does a good job in showing us Hammer's sensitive side without making the viewer cringe.


Pen Pals sees Mike trying to help out a reformed ex-con named Marty who needs help desperately but won’t admit it. Mike is going to give him the help whether he wants it or not. A couple of hoods Marty shared a prison cell with are forcing him to be an accomplice in a series of store robberies, one of the stores being Marty’s. They kidnap Marty’s wife in order to persuade him to play ball but that’s a mistake because it makes Hammer really angry. It’s fun to see Mike Connors, later to become an ionic private eye himself as Mannix, guest starring as Marty.

In Now Die in It Mike has to look for the sister-in-law of an old friend. The girl is seventeen and she’s got herself into trouble, as they used to say in the 50s, but she won’t say who the guy is. And it might be too late anyway. It’s the sort of job Mike really hates. There is some fun though, in the scenes in the Dewdrop Club, with Mike demonstrating his ability to get reluctant witnesses to talk. A pretty good episode. 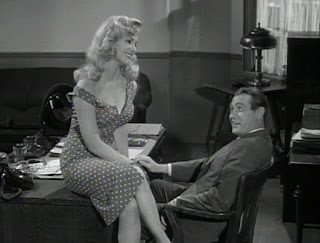 Groomed to Kill seems like it’s just a small-time shakedown. A guy about to be married is being blackmailed over a picture taken with a girl. The girl only wants a hundred bucks. It’s no big deal. Except that it leads to murder. A fairly solid episode with three quite convincing suspects.

A floating crap game is the background to Slay Upon Delivery. Bruce and Doris Green run the game and the game is not exactly honest. A thuggish ex-private detective named Murphy collects their bad debts for them. One of their customers who’s lost a lot of money is being difficult about paying up. The customer disappears and that’s where Hammer comes in. Hammer uses his customary methods (his fists) to get the information to solve the case. It’s a nicely seedy and very effectively hard-boiled little episode.

In Doll Trouble Mike decides to take a vacation so he heads off to Brussels to see the World’s Fair. And immediately finds himself with a case. A rich American woman thinks she’s located her sister’s daughter who apparently survived a concentration camp. But Mrs Putnam is no fool. She’s being asked for a lot of money and she suspects a con. Mike suspects that as well.

Now I’m quite sure that the producers didn’t come up with the money to send Darren McGavin to Belgium to film this episode but there is definitely plenty of location shooting that was done somewhere. Even if it was shot on the backlot it still manages to do a surprisingly good job of convincing us that it’s taking place in Brussels. This one has an expansive feel that is very very unusual for 50s American crime dramas. And it’s a reasonably good story with a fight sequence that is excellent even by the high standards of this series (no real surprises there since the episode was directed by William Witney who was incredibly good at that sort of thing).

Sometimes it’s better to leave the past well enough alone but that’s not how Oliver Bates sees things in I Remember Sally. He’s an old man and he’s dying and he wants to find Sally, a sweet young thing from Salt City South Dakota. But that was fifteen years ago and Hammer isn’t at all sure that Sally is the same sweet young girl that Oliver remembers. But Oliver Bates is determined to find her. Hammer finds her, but his suspicions about her were tragically correct. A good episode. 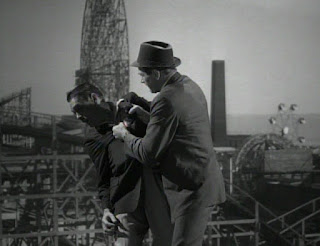 Wedding Mourning is an unexpected episode. Mike Hammer has fallen in love. That’s unusual enough. But he wants to get married. That’s very unusual. So unusual that the local bookies are offering odds on whether the wedding goes ahead or not. A good episode but very dark for network TV in 1959.

In Merchant of Menace a cheap hood named Gus Donovan, just out of the slammer, is making death threats against Hammer, which just happen to coincide with Hammer being out of town for a week. This leads to rumours that Mike is running scared and in his business he can’t afford that. So he has to find Donovan. This one has a plot with a neat twist. It’s good stuff.

In A Mugging Evening a businessman is set up by a girl in Central Park and his briefcase stolen. He can’t go to the police because he’s a married man, so he hires Hammer. All he wants is the briefcase back but the case takes a nasty turn. On the other hand Hammer does get to learn how to skate, with an attractive blonde as his teacher, so it’s not all bad. A good episode.

In Slab Happy broken-down prize-fighter Kid Dakota gets convinced that his ex-wife Julie’s new husband Mitch is beating her up. It’s a dangerous idea to put into the mind of a guy whose fists are lethal weapons, but who put that idea into his head and why? A pretty decent episode and it’s one of the rare occasions that Hammer finds himself in a fist-fight he can’t win.

Aces and Eights starts with Mike persuading a storekeeper not to prosecute a woman for shoplifting. She spins Mike a sob story which he swallows, and it turns out to be true. Her husband is being fleeced by card sharks but the mystery is how the crooks expect to collect their money from as guy who doesn’t have any. The explanation turns out to be rather sinister. A good solid episode. There’s a nice Mike Hammer moment were Mike administers a totally gratuitous but very amusing head-kicking to a bad guy.

Mike’s old buddy Emmett Gates has indulged in one too many extra-marital dalliances and now he’s being blackmailed in Swing Low, Sweet Harriet. And he could end up in much bigger trouble than that. A decent episode. 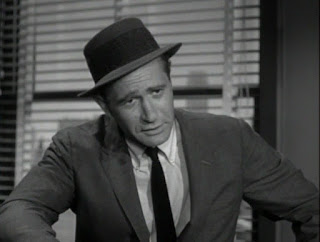 In Requiem for a Sucker a piano player is in debt to a loan shark and the loan shark is killed. The police draw the obvious conclusion, but maybe it’s the wrong one. Not a bad mystery in this one.

Mike is hired by a woman to investigate the death of her father in The Big Drop. He was an experienced window-cleaner and the daughter believes he could not possible have fallen to his death accidentally, therefore it must have been murder. It seems to have something to with a crooked investment scheme but maybe it’s a lot more complicated than that. A good episode in which Mike discovers he doesn’t like heights or breaking and entering or glamorous blondes who are a bit too coöperative.

Siamese Twinge is a story of true love running into a few obstacles. Gary Milford cute Thai singer-dancer Sondi are in love and want to marry. His mother is determined to wreck that and there’s someone else who is an even bigger threat to their wedding plans. Murder might be yet another obstacle. It’s none of Mike’s business but that never stops him. A pretty good episode with Mike’s distinctive technique for interviewing witnesses (involving extreme physical violence) proving to be as effective as ever.

In Goodbye, Al a two-bit gambler named Al Sparks wants Mike to get him off the hook for a gambling debt but Mike knows Al too well and he declines to help. Two weeks later Al is arrested for murder in a small lakeside town and Mike feels bad about it so now he has to help. This is going to lead to a confrontation with Todd Stryker who pretty much owns the town. A fairly routine episode.

Mickey Spillane’s Mike Hammer is one of the great private eye TV series and it stands up today remarkably well. It offers the perfect blend of energy, hardboiled mayhem and wry humour. Very highly recommended.
I've also reviewed season one.
Posted by dfordoom at 15:06