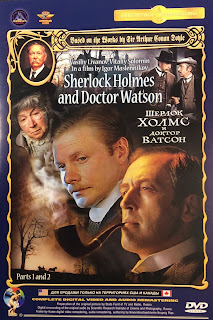 Between 1979 and 1986 Soviet television produced a very successful series of adaptations of Sir Arthur Conan Doyle’s Sherlock Holmes stories. They were widely acclaimed in the Soviet Union, and in the West. Vasily Livanov played Holmes while Dr Watson was played by Vitaly Solomin. The first adaptation, Sherlock Holmes and Dr. Watson, was in two parts, the first being based on The Adventure of the Speckled Band and the second being based on A Study in Scarlet.

The first part begins in an intriguing manner. Dr John Watson accepts an offer to share rooms in Baker Street with a Mr Sherlock Holmes. He likes Holmes well enough but he knows nothing whatever about him and has no idea that he is a detective. Watson is a man who prides himself on minding his own business so it never occurs to him to ask Holmes what his profession is. Watson is however human and he is curious. He decides that, given Holmes’ odd interests, he must be a master criminal of some sort.

This introductory episode serves two purposes. It establishes the essential Englishness of the setting. A well-bred Englishman of the middle classes does not intrude into other people’s business. Watson cannot ask Holmes outright what he does for a living. It just isn’t done. The second purpose it serves is to establish the basis for the friendship between the two men. Once Holmes finally reveals that he is a detective all the suspicion is instantly transformed into comradeship. An immediate bond of friendship is formed. And of course Holmes knows that Watson is a man whose discretion can be relied upon.

The leisurely introduction also very clearly delineates the two lead characters for us. Holmes is a very odd bird indeed. Watson is deeply shocked to discover that Holmes has no idea that the Earth revolves around the Sun but is even more shocked to discover that Holmes considers this to be a matter of no importance whatsoever. Holmes is a man of very deep but very narrow intelligence. On matters relating in any way to criminal investigation (such as chemistry) he is close to being a genius. On matters not related to crime he is as innocent as a small child. All of this is of course straight from Conan Doyle’s stories but this TV production establishes this facet of Holmes’ character very cleverly and very wittily. 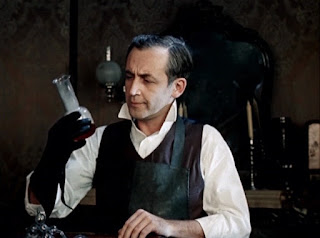 The continuing popularity of the Sherlock Holmes stories has little to do with Conan Doyle’s plots, which are now so familiar to us not just from his stories but from countless movie and TV adaptations. It is the character of Sherlock Holmes himself, and his friendship with Dr Watson (an apparently unlikely friendship) that provides the continuing fascination. This TV version, wisely, emphasises character over plot.

The actual plot of The Adventure of the Speckled Band occupies a comparatively small part of the running time but it’s dealt with deftly and skilfully. And again the emphasis is on character - both Holmes and Watson are outraged by the threat to the life of young Ellen Stoner. She is a charming young woman (played by Vitaly Solomin’s real-life wife Mariya Solomina) whose sister died in mysterious and sinister circumstances and who now believes that her stepfather intends to kill her. For Holmes this is not just crime-solving as an intellectual game. He detests criminals who prey on the vulnerable. It is a detestation that Watson emphatically shares. So while this is a Sherlock Holmes with the character’s eccentricities strongly emphasised this is also a Sherlock Holmes who is by no means lacking in humanity.

The second part opens with the murder of an American and we will eventually discover that it is a very American murder (Conan Doyle was somewhat fascinated by America). There are no signs of violence on the body but there are blood spots on the floor of the abandoned house in which the murder clearly took place. Inspector Lestrade is on the case and Holmes is confident that Lestrade has no chance of solving the murder. And Holmes is quite correct in his assumption.

By this time Holmes and Watson are firm friends. Watson decides to try his hand as a detective, with predictable results. Holmes does not hold this against his friend. In fact he has to admit to making some mistakes himself. 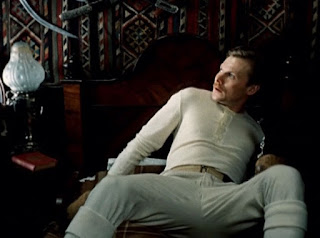 The second film in the series is in three parts, The King of Blackmail (based on the story The Adventure of Charles Augustus Milverton), Mortal Fight (based on The Final Problem) and The Hunt for the Tiger (based on The Adventure of the Empty House). It is in fact handled as a single connected story - the story of the epic fight of Holmes against the vast criminal conspiracy controlled by Professor Moriarty.

As I mentioned earlier the enduring appeal of Conan Doyle’s creation has little to do with his plots which, even by the 1920s, were starting to seem just a little contrived and lacking in the elaborate brilliance which later writers brought to the genre. This second film puts the emphasis on the thriller elements rather than the mystery elements and it’s a sound decision. The Holmes-Moriarty struggle really does make for a thrilling story, with plenty of action and danger. This is Holmes not as armchair detective but as a man of action, prepared to put his life on the line and prepared to kill or be killed.

Production values are extremely high, closer to feature film quality than to television quality. This was clearly a lavish production, with elaborate sets and great use of location shooting.

Livanov’s Holmes is very eccentric but I think his performance works. Holmes may be a very odd person but he has charisma and he is a very driven personality. Livanov plays him as a man for whom the fight against crime is a great game but it is also more than a game.

I can’t praise Vitali Simonov highly enough. This a complex Watson, a man who believes that he just wants to mind his own business but is caught up in the glamour and excitement of crime-fighting. His partnership with Holmes makes him feel more alive than ever before. He has always been a man of honour and principle. Now he has the opportunity to put his beliefs into practice. And Simonov makes this entirely plausible. Watson is a doctor but he was an army doctor. Clearly he always had a certain taste for adventure and a willingness to practise self-sacrifice. It’s also at times a humorous performance but not in the ways that portrayals of Watson often fall down by making Watson a figure of fun. We laugh with Simonov’s Watson, not at him. He is an intelligent man who can see the humour in life. Is he the best Watson ever? I thought Edward Hardwicke and David Burke were very very good in the Granada TV series but I think Vitali Simonov is slightly better. 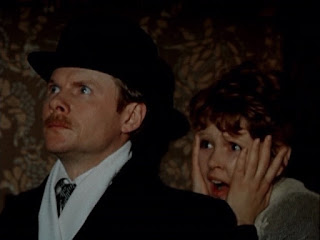 If you’re expecting political subtexts then you needn’t worry. There aren’t any. Watson is thoroughly bourgeois but while he has the quirks of his class (a deep liking for respectability and order) he has the virtues of his class as well. He dislikes men like Moriarty who threaten the social and moral order because threats to the social and moral order really do cause suffering. His Watson is a thoroughly decent man who willingly accepts that sometimes decent men have to risk their lives for noble causes and he has no doubt that fighting crime is a noble cause.

I don’t think Vasily Livanov is as good as Jeremy Brett or Basil Rathbone but he’s not far behind and his performance is delightfully quirky.

In Conan Doyle’s original stories Holmes is on rare occasions troubled by the moral dilemmas raised by his profession. Perhaps justice and a rigid adherence to the law are not always entirely compatible. There is at least one story in which Holmes allows a criminal to go free because sending him to prison would not serve the interests of justice. Even murderers sometimes have motives which make their crimes understandable even if that does not excuse them. This series seems inclined to emphasise these moral dilemmas, most obviously in The King of Blackmail in which Holmes is prepared to break the law in the cause of a greater justice.

All I can say is that if all Soviet television was this good then I want to see more. This is a superb production. It’s intelligent, it’s polished, it’s pretty faithful to Conman Doyle and it’s great fun. Highly recommended.