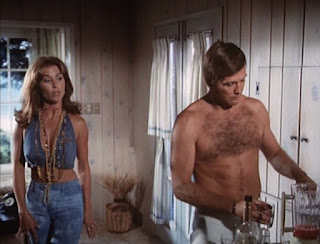 The second of the three 1973 TV movie pilots which preceded the 1974 hit series The Six Million Dollar Man was Wine, Women and War. Compared to the first movie this seems like a pilot for a completely different TV series. The first movie was serious science fiction with a dark and brooding and very cynical tone. This second movie is pure James Bond, if you can imagine a cyborg James Bond.

The fact that Glen A. Larson had now come on board as executive producer may explain a great deal of this. He also wrote the script, and he was certainly a man with the right instincts as to what would work on network television.

The first movie was a ratings success but it was probably fairly obvious that the tone was too dark for a successful weekly series.

The first movie had been based (loosely) on Martin Caidin’s novel Cyborg. This second movie is based (very loosely) on Caidin’s follow-up novel Operation Nuke.

Steve Austin was a civilian in the first movie but now he’s magically transformed (without any explanation whatsoever) into an Air Force Colonel.

Unfortunately the most interesting character from the first movie, spymaster Oliver Spencer (Darren McGavin), has been replaced by a similar but much less interesting and less colourful character, Oscar Goldman (played by Richard Anderson). On the plus side the supporting cast is pretty impressive. There’s the very underrated Eric Braeden as arms dealer Arlen Findletter. There’s David McCallum once again playing a Russian as he did in The Man From U.N.C.L.E. (this time he’s a Russian rocket scientist) and there’s Britt Ekland (soon to be a Bond girl in The Man with the Golden Gun) adding some glamour. In fact adding lots of glamour. 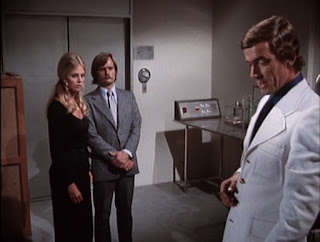 The tone is set right at the start, with Steve Austin as an ultra-cool debonair secret agent in an exotic locale (Alexandria) and with a glamorous woman. It’s like the start of a Bond movie. In fact Wine, Women and War pretty much is a low-budget Bond movie. It has a Bond movie plot (an arms dealer selling nuclear weapons) and a Bond villain (the ice-cold Arlen Findletter). And it has two Bond girl equivalents, the aforementioned Miss Ekland (who appears to be some kind of Soviet diplomat) plus Michele Carey as all-American good-time girl Cynthia Holland. There’s also Earl Holliman as a sleazy OSI operative who’s an old buddy of Steve’s but that doesn’t stop Steve from (quite justifiably) wanting to punch him out by the end of the story.

As for the lot, it’s basic but more than competent. Steve’s original assignment was to steal one of Findletter’s arms catalogues since the OSI has reason to believe that the items Findletter has listed for sale include both American and Russian ballistic missiles complete with thermonuclear warheads. It seems impossible but what if it’s true? The Russians believe it’s true, which is why one of their top rocket scientists has been sent to the Bahamas (where Findletter has his headquarters) to open negotiations with the arms dealer. The Russians have no desire to deal with such a criminal but they also believe they have no choice.

Steve thinks his mission is over but he is about to be manipulated once again. Still, it’s not all bad. He does get to spend a lot of time with two gorgeous babes. And he does have a personal score to settle.

There are some hints of the darkness of the first movie. Steve is shocked by Oscar Goldman’s casual acceptance of a girl’s death as being just part of the job. And Steve is still a reluctant super-spy and he is still being manipulated, and he still doesn’t like it. But he’s not really the same character. He has none of the self-doubts that the first version of Steve Austin had. None of the self-pity. None of the things that made that version of the character such an interesting hero. This new version is smoother, more self-confident, more brash. He’s more Bond-like. He’s pretty cool and it works but there’s no way you’re going to buy the idea that this is the same man. 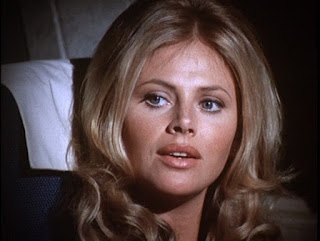 While I said that this is like a low-budget Bond movie it also has to be said that by TV movie standards it’s fairly lavish. The villain’s underground secret headquarters is reasonably impressive. It captures the Bond movie feel fairly well. There are some definite echoes of Thunderball.

Eric Braeden manages to be totally and convincingly evil without ever needing to overact. Which of course makes him scarier. He’s a cold-blooded reptile of a villain. David McCallum is very good and Britt Ekland is both fun and gorgeous.

Steve Austin gets lots of chances to show off his superhuman powers - the scene where he’s swimming underwater while trying to avoid a depth-charge attack is a highlight.

While the first movie tried (with some success) to be serious science fiction Wine, Women and War is more overtly light-hearted escapist entertainment. Maybe it’s less interesting in some ways, but it’s a lot more fun. Definitely recommended.

There was a third TV movie, The Solid Gold Kidnapping, which I’ll get to shortly.