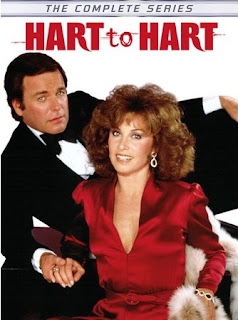 I did a brief writeup of the first season of Hart to Hart a while back and I was a bit lukewarm about this series. Having watched a few more episodes I’m inclined to be a bit more generous.

Hart to Hart was created by Sidney Sheldon who as well as having a successful career in television was also one of the bestselling novelists of all time. Neither his TV series not his novels were ever going to be described as art but they weren’t supposed to be. Sheldon was perfectly content to be an entertainer and laugh all the way to the bank.

The executive producers on Hart to Hart were Aaron Spelling and Leonard Goldberg, who were of course also responsible (among many other series) for Charlie’s Angels. And Hart to Hart strikes me in much the same way that Charlie’s Angels does. Both shows have a winning formula. Both Hart to Hart and Charlie’s Angels have glamorous charismatic leads, and both feature comic relief (provided by Lionel Stander and David Doyle respectively) that can be a bit overdone. And both series suffer somewhat from lazy writing. You often find yourself thinking that a bit more effort put into the scripts might have paid dividends. Both both series were hugely successful. Which tends to indicate that Aaron Spelling and Leonard Goldberg probably knew a whole lot more about making successful television than I do.

In fact it’s possible that in the case of both shows the secret of their success was that they didn’t try too hard. They were television comfort food. They didn’t alienate viewers (who just wanted something relaxing and entertaining to watch) by trying to be too clever or too arty.

And both series succeeded by creating an aura of glamour, by having very attractive leads and by offering good-natured fun. And occasionally both series would come up with episodes that were unexpectedly good.

Hart to Hart (to an even greater extent than than Charlie’s Angels) is all about glamour. This was after all a concept dreamed up by Sidney Sheldon - take rich glamorous beautiful people and have them murder each other, with style. In this case you have a husband and wife who are rich and famous and don’t need to bother with work unless they feel like it (which they rarely do). They amuse themselves by solving murders. Being rich they don’t need to get paid for this, and being rich they can rely on the police indulging their hobby. It was a formula that obviously appealed to viewers. And it does work. Jonathan and Jennifer Hart are rich and famous but they’re not obnoxious about it. They’re likeable and really they’re just like any normal married couple (who happen to be fabulously rich and famous). 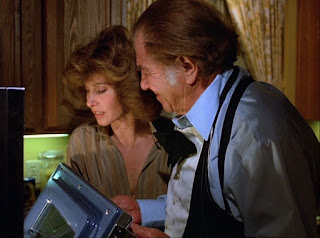 Glamour is something that doesn’t really exist in modern television or movies. Sure there are rich people, but real glamour is a different thing. Real glamour comes from sublime self-confidence, it has to be effortless, and Robert Wagner and Stefanie Powers have it. This is the glamour that movie stars used to have. They don’t make movie stars like Robert Wagner any more and even in the 80s they didn’t make movie stars like Robert Wagner any more. That’s why his performance works. The producers wanted a Cary Grant for the 80s and that’s what they got. His career started in 1950 and seventy years later he’s still working. His earlier series It Takes a Thief is well worth checking out. Stefanie Powers had already demonstrated her suitability for this kind of light-hearted television with The Girl From U.N.C.L.E. back in the 60s.

Compared to other hugely successful 80s TV series Hart To Hart is not so obviously 80s. The stories could just as easily have taken place in the 1930s and the characters could easily have been taken from golden age Hollywood movies. It’s a series that takes place in its own universe where money and class never go out of fashion.

What’s also great about this series is that there’s no fashionable irony, and no snarkiness.

The DVD release includes a documentary which features many of the key people behind the series - Sidney Sheldon, executive producer Leonard Goldberg, writer Tom Mankiewicz and the two stars, Robert Wagner and Stefanie Powers.

In Which Way, Freeway? A rich jeweller is murdered and the key witness is Freeway (the Harts’ dog). Actually here are two key witness, Freeway and his doggie friend Suzie. And the murderers will have to do something about those witnesses. The plot is really pretty thin and a bit far-fetched but there’s an excellent golf cart chase and there’s a luggage cart chase as well. And there are cute doggies in danger, to provide the necessary suspense (and emotional investment for the audience). It has no right to work, but somehow it does. 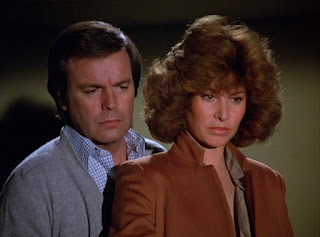 In Downhill to Death Jennifer is doing something unusual. She’s working (she’s supposedly a journalist). She’s in a restaurant interviewing a punk rocker when she overhears a conversation between a man and a woman in a neighbouring booth, and the subject of conversation is murder. And the man is an old friend of the Harts. Could he really be plotting to murder his wife? This one has a reasonably twisty plot and (something of a defining characteristic of this series) an unusual chase, this time with snowmobiles. Very entertaining.

The Raid is more of an action episode. A husband-and-wife scientist team is kidnapped in a mythical South American country. They work for Jonathan and they’re also friends of the Harts. The local police won’t help, nor will the State Department so Jonathan teams up with an old buddy (a would-be revolutionary but a good revolutionary not one of the bad ones) to foil the kidnappers. A routine episode.

Things take a decided turn for the silly in Sixth Sense. A young female psychic working for Jonathan has a precognitive vision of her own murder. This was 1980, when ESP was still fashionable and some people still thought it was just vaguely plausible. That vision turns out to be both true and false. The plot is a bit complicated and very silly and very goofy. To a large extent it’s an excuse for the two leads to really ham it up, with Jonathan playacting as a Sam Spade-style hardboiled private eye and Stefanie Powers really going to town as a gypsy fortune-teller. If you’re going to do an episode such as this you have to be prepared to go totally over-the-top and embrace the fun and the goofiness and that’s what Wagner and Powers do (Powers is particularly good). And it actually works. It really does come across as charming and fun.

A woman tries, unsuccessfully, to kill Jennifer’s hairdresser in Does She or Doesn't She? Barry (the hairdresser) doesn’t seem the type to get involved in that kind of romantic drama. He likes women but he won’t have anything to do with married women. And Sally Hutchins is married. The Harts figure that maybe something else is going on here and that’s enough to get them interested. Quite a decent plot in this episode. Good stuff. 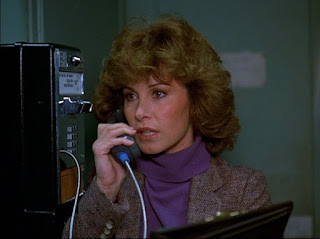 Cruise at Your Own Risk takes the Harts to sea. There have been burglaries on several of Jonathan’s cruise liners (yes apart from all the other things he owns he owns three cruise liners). The insurance company is being difficult so the Harts set out to solve the burglary themselves. Jonathan will pose as a businessman taking his mistress on a cruise (with Jennifer playing the mistress). It’s fun to hear guest star John Hillerman (from Magnum, P.I.) talking with his natural American accent. OK, the plot is a bit thin but it’s enjoyable fluff which is what this series is all about.

The question in Too Many Cooks Are Murder is why anyone would want to try to murder a French chef. The answer is that he’s made a discovery, but no-one knows what the discovery is. All the Harts (who happened to be present when the attempt was made) know is that it’s something worth killing for. This one works quite well.

In Death Set the Harts’ friends Darryl and Blair Craddock are having marital problems. Darryl is starting to think that maybe his very rich family was right about Blair marrying him for his money. It all leads to a shooting tragedy. The Harts witnessed the shooting but even they don’t know what really happened. They are however determined to find out. What they uncover is a decent little mystery. You don’t want to think too much about some of the details of the plot but all in all a good solid season finale.

Watching Hart To Hart is like skipping dinner and going straight to dessert. Maybe it’s not nutritious but it goes down very easily. It aims to glamour and effortless charm and that’s what it achieves. This series has definitely grown on me. Recommended.
Posted by dfordoom at 02:20