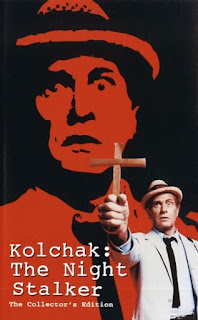 Carl Kolchak, investigative reporter with a nose for stories involving the supernatural, the paranormal and the just plain weird, made his first appearance in two TV movies. These were successful enough to spawn a series, Kolchak: The Night Stalker, which aired on the American ABC network in 1974-75. Sadly the series lasted only a single season. The network might have been well advised to give the series more time to establish an audience. After its cancellation it quickly achieved cult status and became extremely popular in syndication.

Kolchak: The Night Stalker was to the 70s what The X-Files was to the 90s. Kolchak keeps running across stories that just cannot be explained except as supernatural or paranormal phenomena or occasionally just weird fringe science. If only he could just get hold of some hard evidence. But he never does. Or if he does, it gets taken away from him or destroyed. Or for some reason his stories just get killed. But just like Mulder Carl Kolchak never gives up.

Darren McGavin was perfectly cast as Kolchak, a rumpled eccentric who revels in his reputation as a pushy oddball. Kolchak has its tongue-in-cheek side and it has its darker side as well and McGavin handles both effortlessly (anyone who doubts McGavin’s ability to be dark and edgy obviously hasn’t seen him in the late 50s Mickey Spillane’s Mike Hammer series).

This is a series that had a lot of promise but it never quite found its feet. Of course it wasn’t given time to do so. At times it does rely too much on Monster of the Week stories. It’s never quite sure if it wants to stick to the slightly jokey tongue-in-cheek tone or if it wants to get dark and serious. The episodes that rely on special effects suffer from the fact that the effects sometimes look cheap. But the promise was there and there are plenty of solid episodes with original and creepy ideas. 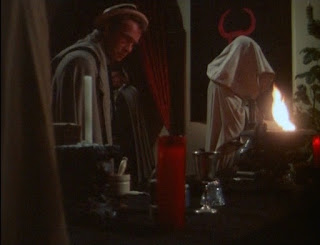 The series may just have been ahead of its time. Even science fiction series had a rough time on US television in the 60s. Weird stuff seemed to be accepted in anthology series (such as The Outer Limits and The Twilight Zone) but perhaps audiences were not ready for a series that must have seemed an odd mix of a conventional newspaper reporter drama with outrageous story lines. It may have been too much of a collision between television drama normality and weirdness. The Outer Limits and The Twilight Zone really didn’t pretend to take place in our reality, but Kolchak did. Two decades later The X-Files was a major hit, following just about the same formula.

In Mr R.I.N.G. Kolchak stumble across a secret government robotics project called R.I.N.G. (Robomatic Internalized Nerve Ganglia). And it appears that one of their robots is loose, and he’s kinda dangerous. This is a very paranoid X-Files sort of story with the US Government, and especially the military, as the enemy. And the military is a much scarier enemy than any mere monster. An extremely good episode.

They Have Been, They Are, They Will Be… is the other Kolchak episode that is in the X-Files kind of mould. It starts with some seriously weird unexplained happenings. Zoo animals supposedly vanishing. People dying and the post-mortems reveal odd disturbing things. Electronic equipment that goes missing. There’s no actual evidence of anything, so why are the Feds so interested and what are they covering up? If you can’t afford fancy special effects a really good option is to avoid showing anything and rely on suggestion and that’s what his episode does. A lot of people don’t like this episode and I can see why. It is very low-key and lacks any real scares. But it is extremely interesting and I’m quite fond of it.

In Primal Scream an oil company has found some strange cells in a core sample from the Arctic. What’s really strange is that the cells are millions of years old but they show signs of life. Then there are the murders. Murders so brutal it’s as if they were carried out by something not quite human. And Carl Kolchak has some photos of footprints are they’re not quite human either. A fairly typical Kolchak episode, a bit silly but kind of fun. 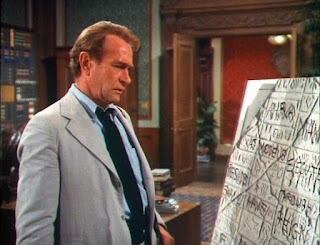 The better Kolchak episodes are the ones that don’t rely on guys in monster suits and have to rely instead on atmosphere and genuine scares. Episodes like The Trevi Collection in which Kolchak discovers the links between the worlds of high fashion and witchcraft. There are some women who want to have it all, and they are willing to practise the black arts to achieve their desires. Store mannequins are always slightly creepy (the whole uncanny valley thing) and they play a big rôle in this episode. There are also a couple of pretty devious murders. On the whole an excellent episode.

In Chopper a graveyard is cleared for the construction of condominiums. Disturbing the dead is not a good idea. Several brutal slayings follow, with witnesses reporting a headless figure on a motorcycle. Carl gets some photos of tyre tracks but that makes things more confusing - such tyres have not been made for nearly twenty years. They’re the tyres you would have expected to find on the sorts of motorcycles that were popular with motorcycle gangs in the 1950s. Of course there’s no point in trying to tell the police any of this. Kolchak will have to deal with this mystery on his own, if he lives long enough. A pretty decent idea mostly well executed even if the headless biker is a bit unconvincing.

Demon in Lace involves the mysterious deaths of a number of young male college students. There’s no obvious cause of death but they died looking very scared. In each case the body was found along with the body of a young woman, but what worries Kolchak is that the young women had not died at the same time as the young men. And then there’s that Mesopotamian tablet with the weird inscription. The translation of one of the words as succubus worries Kolchak a lot. A truly excellent episode.

Legacy of Terror begins with two murders, both victims having had their hearts torn out. Literally. The only people Carl can think of who do things like that are the Aztecs, but Aztecs in Chicago in the 1970s. It seems unlikely. Then a third similar murder follows and Kolchak starts to see a pattern. A very good episode. 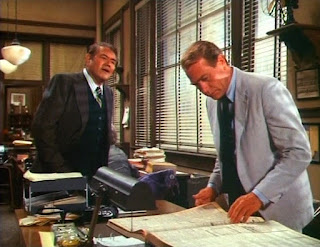 The Knightly Murders begins with a political boss being killed by a crossbow bolt. More murders follow, all done with medieval weaponry. Is the murderer a disgruntled medievalist, an actual medieval knight, some kind of lunatic or something else entirely. Kolchak has his own ideas after having a close encounter with a lance. John Dehner guest stars as the delightfully egotistical, highly literary but incurably lazy Captain Vernon Rausch, a legend in the Homicide Squad. A good fun episode.

What do eternal youth, Greek goddesses and dating agencies have in common? Quite a lot perhaps. Beauty and physical perfection seem to Carl to be the connecting thread. Youth Killer actually starts with 90-year-olds dropping dead all over Chicago. Not very unusual, but the circumstances are puzzling. Carl is particularly intrigued by the ring and the glass eye. This is one of the best Kolchak episodes, combining cleverness with subtle creepiness and wit.


The Sentry takes place in a gigantic underground data storage facility. It seems there have been a few accidents at the facility. Bodies found with teeth marks. Reptilian teeth marks. The cop in charge of the case is a glamorous lady detective but she’s determined to stop Carl from digging around in this case. The setting is very cool but the monsters are pretty silly.  It’s still a fun episode in a good kind of way.

OK, some of the guy-in-a-rubber-suit monsters are a bit embarrassing and there are a few dud episodes but the good episodes outnumber the bad ones by a considerable margin. And the good episodes are often very good indeed. Darren McGavin is so likeable he makes even the weaker episodes watchable.

Kolchak: The Night Stalker is immense fun. Highly recommended.
Posted by dfordoom at 23:25